For an 18-year stretch, the Village of Roslyn was ground zero for up-and-coming musicians and comics who would eventually go on to become household names. From its founding in 1971 right through its unfortunate closing on May 3, 1987, My Father’s Place (MFP) was where you’d catch the likes of Bruce Springsteen, Billy Crystal, Tom Petty, Billy Joel, The Police, Aerosmith and Madonna in their early days. The mastermind and master of ceremonies was and continues to be Michael “Eppy” Epstein, Roslyn’s self-described “resident hippy,” who is set to relaunch MFP June 30 at its new home at The Roslyn Hotel, two-plus decades after it was shuttered.

As president and CEO of the Rozlyn Entertainment Corporation, Epstein is teaming up with CFO Alex Ewen and COO/General Manager Dan Kellachan to resurrect MFP as a 200-seat, 2,000-square foot supper club with a world-class restaurant that will be found in the hotel’s current ballroom and banquet hall. And while the 70-something music entrepreneur is as appreciative of the nostalgia tied to his first run with MFP (as evidenced by the string of endlessly fascinating anecdotes he’s quick to share), Epstein warns that this go-round with the club will be an entirely different experience.

“This is not going to be the old My Father’s Place. There’s no way that’s going to happen. We’re going to try to use this place as a sounding board for new talent anyway,” he says. “This isn’t going to be a place where people jump on the tables, drunk on cheap beer. It’s going to be an intimate and elegant, speakeasy/supper-club type of venue. Everyone who was 18 is now 56 or 55 and everyone wants to be up front and personal with the acts, and that’s what they’re paying for.”

Among the other amenities the new MFP will offer is a club membership program called Friends of My Father’s Place. By paying a one-time, introductory $50 fee, members will get initial notice for new shows, early ticket access, table reservations and member-only meet and greets. According to Kellachan, this amount is good through the rest of 2018 and all of 2019 before the annual fee goes up to $100. While membership is currently $50, Kellachan said members will be enrolled for the remainder of 2018 as well as 2019.

Shortly after purchasing the Roslyn Hotel in March 2017, owner Sumeer Kakar was introduced to Epstein and Ewen through his broker, who arranged the original sale. While Kakar was unfamiliar with MFP, he quickly became a convert to its importance as a landmark. He is eagerly awaiting the completion of the build-out that will include number of upgrades including a spacious stage, state-of-the art sonics and sound system, a new eatery and a main entrance that will be accessible through a door from the parking garage.

“Personally, I think Roslyn is probably the most happening area on Long Island. It’s the most transient with restaurants and lounges to go to and things to do,” Kakar explains. “We feel like we’re on the same page with Eppy in terms of providing a quality product and quality live music—not cover bands but original music. And that’s rare on Long Island and to even have something similar in Manhattan—there are only a few places that do that there. And we understand that the people in Roslyn are discerning in terms of quality and it’s important for us to do the best we can to provide that refined experience. Even though the first My Father’s Place was much more casual—more of a pizza and hamburger joint—we feel that this original crowd is more refined now and that’s who we need to cater to.”

The original MFP was a two-floor, 13,000-square foot space located on 19 Bryant Avenue, a stone’s throw from its new location. Having started out with his cousin Richie Hersch running what he called an alternative shopping center that included a head shop, silver crafter, clothing boutique and a cheese shop, the one element missing was a place to host live music, which Epstein was prohibited from doing by village zoning laws. His solution was to cross the street, where he offered owner Jay Lenahan to book rock acts at My Father’s Place, a struggling club/bowling alley. The club’s new incarnation relaunched on Memorial Day, May 31, 1971, with a sold-out Richie Havens show. Approximately 3,000 artists and 6,000 shows performed here until MFP closed its doors nearly 20 years later.

The new MFP already has a slate of artists booked, many of whom played the club back in its heyday, with the inaugural gig kicking off with singer-songwriter Livingston Taylor. In subsequent weeks, fans will be able to see rockabilly legend Robert Gordon, Americana singer-songwriter Garland Jeffreys, blues legend John Hammond, fusion outfit Spyro Gyra, quirky roots-rockers NRBQ and swing revivalists Roomful of Blues. And while this eclectic array of talent hearkens back to MFP’s roots as a showcase for all kinds of music, Epstein’s goal is to highlight new and original music, something that has also been a part of his club’s DNA.

“I may get killed doing it, but I’m not going to leave the world at 70 years old, with the way the music industry is. It’s just not fair. My Father’s Place was always about developing new talent—whether it was comedy, rock, blues, jazz or reggae,” he explains. “It’s always about new music. Yeah, you’d see the act there first. Then they’d play Malibu and then they’d play The Calderone or Nassau Coliseum. That was the progression. No one is trying to develop new talent anymore. The thing is, me booking attractions—it’s all about rich people paying stupid money to see an act. That’s not what it’s about. It’s about new reggae, new rock, new jazz, new blues and new comedy. Giving room to do what I still do, which is to develop new entertainers.”

Plans include setting aside Thursday nights to showcase new acts to play MFP where admission will be affordable and performances can be broadcast using cameras and iPhones to stream the shows, not unlike what Epstein was doing for the past two years when he was booking concerts at The Lighthouse in Glen Cove. It’s a far more challenging feat versus how Epstein worked in conjunction with WLIR and record labels back in the 1970s and 1980s, when promotional dollars flowed and the Internet had yet to upend the music industry model in a way where users don’t feel the need to pay for music. For his goal of breaking new talent, Epstein knows that live music is an integral part of the equation, something he was reminded of by storied music industry executive Ahmet Ertegun. 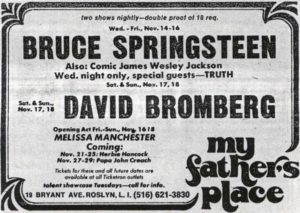 “I was upset because [local act] Barnaby Bye wasn’t getting a lot of airplay. There were a couple of pockets that we had—St. Paul, MN, and Des Moines, IA—weird places that the record was a hit—and of course WLIR and WBAB. I asked Ahmet what I was going to do and he said, ‘Eppy, just go out there and play. Play Long Island, go out to Connecticut and New Jersey and have people get in front of the band. Let them become fanatics about the band. Then everything else will happen and we’ll be kissing your ass,’” Epstein recalls. “He taught me that it’s important for people to see a band and fall in love with them. Then they’ll want to know what they had for breakfast. But without the radio and without a jock like Dennis McNamara asking what they had for breakfast, you don’t know. We’re in a really bad situation—no radio and no records. We’ve got Spotify and we’ve got Pandora. What am I doing? I have no idea. But you know what? Neither does anyone else—but
we’re going to figure it out together.”