Movies For The Military

Garbarino has hand in proposed bipartisan small business succession legislation According to a survey conducted by the Federal Reserve Bank, three out of every 10...
Read more
Nassau News

‘Yes We Can’ Do Vaccines

Community center is county’s second vaccine hub The horrific examples of the Tuskegee experiments and other racist malpractices at the hands of the medical establishment...
Read more
TOP STORIES 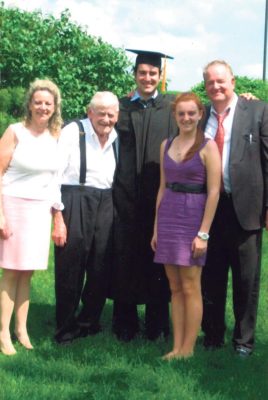 DVDs seem a thing of the past, collecting dust on shelves as viewers opt for streaming services. But for Arthur Strachman, those silver discs are a precious commodity.

Arthur heads up Big Hy For Heroes, a one-man organization started by his father, local resident and World War II veteran Hyman Strachman, in 2004, which ships DVDs to U.S. troops overseas. For years, Hyman and Arthur personally shipped boxes of DVDs to troops all around the world, giving servicemen and women a small, but strong, connection to home.

Hyman passed away last year at the age of 97, after more than 13 years of sending DVDs to hundreds of thousands of troops. Taking up the charge now is his son Arthur, a local resident and accountant by trade who in 2015 earned a presidential lifetime achievement award along with his father for Big Hy for Heroes.

“We were doing something that brought us happiness. It extended my father’s life; when he got older he wanted to help people out and it really was a great thing for him and those he affected,” Arthur said. “It was a win-win. People don’t realize how enjoyable it is for the troops and soldiers. They can’t be streaming so this is really their go-to entertainment.”

With each shipment, Arthur includes a cover letter explaining who his dad was and the legacy he’s continuing. Shipments are customized by the amount of people in the outfit, as well as the number of men and women. Movies are grouped together by genre and prior to shipping, Arthur sends an email of what movies are coming, so the chaplains, commanding officers, sergeant majors and sergeants receiving them know what to expect as well as how to organize movie nights.

As the holidays approach, Arthur said he tries to send more inspirational movies. But there are some films that are always winners—superhero movies, classics like Casablanca or Forrest Gump, sports movies, comedies and horror films.

“The best barometer is, is this a movie you’ve seen more than three times? If you love it, they’re going to love it. In a sense, you’re your own movie critic,” said Arthur. “If you really enjoy a particular movie, how can’t people I’m sending it to enjoy them?”

While his father was a known bootlegger—a 2012 New York Times article revealed that he had duplicated more than 300,000 DVDs, but authorities turned a blind eye to his good, yet illegal, deeds—Arthur buys his DVDs on eBay.

And though many of his DVDs are second-hand, there is one thing Arthur is unflinchingly uncompromising about: quality.

“A lot of times…people send leftovers to these soldiers, which I thought did more harm than good because they might send movies in bad shape or that were not that good,” said Arthur. He and his father used to imagine the shipment going to a soldier in a cave in Afghanistan, only to find that the movie didn’t work. “We always sent packages with that in mind, we don’t want someone to open up a movie and say this movie stinks or doesn’t play. The quality is unwavering and that’s the most important thing.”

Though he accepts them, Arthur said he doesn’t ask for donations. So, he was pleasantly surprised when the Town of Oyster Bay contacted him about doing a joint DVD drive.

“The thousands of people who have asked about it, it’s mostly lip service. Over the years we haven’t really gotten anything,” Arthur said. “But [the town] has been really getting involved, more than I expected. The office extended itself and that makes me feel great.”

The town will be collecting DVDs for Big Hy For Heroes through November. Letters and notes to soldiers are also welcome. For more information, call 516-624-6380.

CBS’ new crime drama Clarice is a deep dive into the untold personal story of FBI agent Clarice Starling as she returns to the...
Read more

Garbarino has hand in proposed bipartisan small business succession legislation According to a survey conducted by the Federal Reserve Bank, three out of every 10...
Read more

Energy efficient windows are an important consideration for both new and existing homes. Heat gain and heat loss through windows are responsible for 25...
Read more

Great Neck producers use BroadwayHD to bring live theater to the masses You can say that theater is in Stewart F. Lane’s blood. The proud...
Read more

CBS’ new crime drama Clarice is a deep dive into the untold personal story of FBI agent Clarice Starling as she returns to the...
Read more
Arts, Music & Entertainment

Great Neck producers use BroadwayHD to bring live theater to the masses You can say that theater is in Stewart F. Lane’s blood. The proud...
Read more
Arts, Music & Entertainment