After hundreds of live shows in settings across the globe, My Morning Jacket can still count on New York City to supply inspiring venues filled with energizing fans.

The band, whose style dips into all forms of rock including southern, indie, alternative and psychedelic, returns to the city this month with a run of four shows at the Beacon Theatre. It will be the first full length shows the band has ever played at this particular New York venue, a fact that even surprises drummer Patrick Hallahan.

“We played one song at the Beacon years ago and it wasn’t even one of our songs,” said Hallahan, referring to a cover of Bob Dylan’s “Tonight I’ll Be Staying Here With You” at a concert celebrating the Dylan movie I’m Not There in 2007. “The legacy of that venue in itself excites me. There’s a lot to live up to and a lot of ghosts in that room—we are pumped. It’s an intimate and ornate theater and that is our happy place.”

Hallahan and the rest of the crew in My Morning Jacket are no strangers to intimate stays in New York City. Back in 2010, the band spent five nights at Terminal 5, playing a different album in its entirety each night. But with two albums released since those legendary shows, Hallahan said the band’s approach at the Beacon will likely be much looser.

“We’re still trying to figure out how it’s going to be organized,” he said, “We’re going for a ‘no-repeats’ format. Maybe blend the catalog, maybe do a quiet acoustic set one night and a louder show the next—you’ll just have to take your chances when you decide which show you’re coming to.”

No matter what shape the final setlists take, Hallahan expects a dynamic run of shows and a special time for the band—and the fans—in the big city. Remembering shows past, Hallahan said the band can always count on New York crowds to bring multitudes of energy—from the smallest venues to the biggest.

“We have sort of a symbiotic relationship with the city of New York,” he said. “It’s always been a home away from home for us. We come to town and gauge the crowd and fill in the set. We’ll be taking some chances at these shows and we know it’s going to be great because New Yorkers always give back.”

My Morning Jacket has been on the road supporting their latest album, The Waterfall, since late spring. It’s an extensive marathon of a tour that has taken the band through every section of America, as well 10 stops in Europe. After their current three-week break, the band stops in Philadelphia and Boston before hitting the end of the road at the Beacon.

A road warrior with My Morning Jacket since the early 2000s, Hallahan said that energy levels start to get a little depleted toward the end of any tour. But, he said, it’s not the time on stage that hurts—it’s the rest of the day.

For Hallahan and his band mates, the stage lends itself to an energetic atmosphere. Once they hit the stage and the show opens and rolls through its peaks and valleys, the band comes alive. Feeding off the crowd’s energy, all of those aches and pains are quickly forgotten. 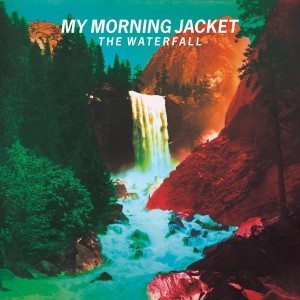 “Our shows are participatory and the fans help us rally on stage,” he said, adding that the band can feel the crowd’s vibes and electricity on the stage. “My relationship with the crowd is different than the guys up front. I don’t get to interact as much, but I can feel the moving and the shaking. The energy the crowd is feeling, we feel that same energy. It’s a conversation, it’s a dance.”

Now seven albums deep, My Morning Jacket’s repertoire has grown far beyond the band’s more folk-tinged early days. At the beginning of the recording process for The Waterfall, Hallahan said the band had no idea what kind of album they were making. They plugged in and decided to leave no musical stone unturned.

What resulted was an album with a wide stylistic scope, complete with rollicking moments of live-in-the-now sentiment, rising choruses and unabashedly anthemic choruses.

“When we were in the middle of recording this album, I knew I was going it miss it when it was over,” said Hallahan, adding that the plaintive ballad “Only Memories Remain” is currently his favorite song to perform live. “It’s the only album of ours that I listened to from start to finish and didn’t wince once.”

The musical depth of The Waterfall, along with choice cuts and surprises from the rest of the band’s extensive catalog, will fill this month’s Beacon shows with cathartic, chaotic and soothing moments for the band and fans alike.

“There’s a need to reinvent and continue to find something new out of life on an individual level, and I think that comes through as a band,” he said. “The love grows as the years grow.”