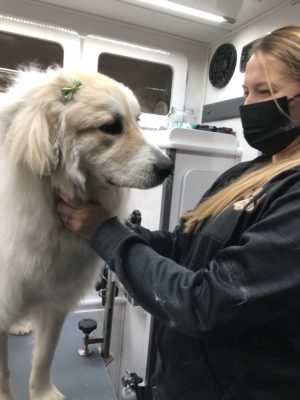 “Mobile grooming, since the start of the pandemic, has gotten insanely crazy,” said Chris Elias, co-owner of The Ruff Life Mobile Grooming with his wife, Emily Elias. “It has always been popular, but the future is this.”

Chris explained the demand for this catered service as being similar to the Uber Eats or Grub Hub phenomenon that has seen service multiply dozens of times since March with the restrictions and precautions of the COVID-19 virus pandemic.

With Emily’s, more than 10 years of grooming expertise, the couple hitched up the reins on their own business, in what began as a hobby career. Their efforts, now four years later, have exploded into seven full-service luxury mobile salons and 10 highly trained staff groomers, one of the largest mobile grooming services on Long Island.

“We travel the whole island, from the Queens border, all the way to the Hamptons,” Chris, a lifelong Massapequa resident, said. “And yes, there are a lot of mobile groomers on Long Island, but it’s a repeat service; no one is fighting for business.” He said their business has seen more clients in the past six months than it has in the past four years in total.

Dogs and cats reap the majority of the benefits of this once-luxury service, but Emily said occasionally they do see a rabbit or guinea pig for some pampering. And even still, it’s hard to imagine cats in a grooming setting, but Emily said, “Cats do not so as well in a store salon because it is high-stress for them, but take that same cat and put her in the grooming van, it makes a big difference.”

The groomers service a lot of special needs, older and anxiety ridden dogs, as well.

“There’s too much going on at in in-store salon, other dogs are barking, they’re in kennels” Chris said. “Here, the dogs come in, straight from their own house and are groomed straight through. The dog feels the calmness of the groomer, which makes for a better experience.”

Chris said they see a lot of difficult pets, ones who have typically been kicked out of a grooming salon for being super aggressive.

“Dogs do a lot better in this environment because it’s clean, it’s tranquil, the service is one-on-one, there are no cages.”

This is also the reason for the price points being different between mobile grooming and in-store salons.

The Ruff Life offers a simple, all-inclusive grooming package based on the dog’s weight and whether they are long- or short-haired.

Their groomers are trained to not only grooming and liabilities of dog handling, but also in operating the state-of-the-art van and representing the Ruff Life business.

“Skilled, licensed and insured groomers are hard to find,” Chris said. “We aim for grooming consistency between all groomers; we live for our reviews and stand by our service.”