When famed photographer Mick Rock shows up for the Mick Rock Iconic Gallery Show at The Jewelry Studio in Plainview on Oct. 20 and Oct. 21, it’ll represent a case of creative worlds fusing together. The Studio’s owner and driving force, Robert Pepkin, collaborated with Rock on designing a number of limited-edition wearable jewelry art pieces inspired by the former’s shots. Introduced by longtime friend and veteran promoter Dave Glicker roughly three decades ago, Rock and Pepkin are finally working together for the first time. It’s a notion that intrigued Rock.

“What [Robert] was keen to do was work with me on some things, which we have been doing. We decided to do an exhibition where we mix the prints up with art and the jewelry. That’s something different, and I’m happy to do it,” Rock explained. “All of the pieces are based on my photographs. A lot of them are shaped like pics, but of course, they’re much more exotic. It was his enthusiasm to do it that got me into this. Then I saw his own work and I said we should do it. I haven’t done anything like this before. We consult with each other, but he does the actual work.”

For Pepkin, who got his start attending Pratt Institute for Fine Art before working with fine jewelry artist Maria Mencher for extra income, the chance to finally work with Rock was equally appealing to him.

“The attraction to Mick’s work for me comes from the many theatrical undertones, from the drama behind the legendary black and white Queen II album cover to capturing the dramatic poses of Iggy Pop on stage,” he said. “All of his shots capture the spirit of the artist or band he works with. The same has gone for me when trying to create something that someone will wear. You have to capture their spirit because the pieces become part of them and part of their own history.”

While Mick Rock’s name may not immediately jump out to the casual music fan, the timeless images he’s captured over the past five decades certainly will. The septuagenarian fotog’s other notable album covers include Lou Reed’s Transformer, Iggy Pop’s Raw Power, The Ramones’ End of the Century. Syd Barrett’s The Madcap Laughs and Joan Jett’s I Love Rock’n’Roll.

In addition, Rock has a treasure trove of images he shot that have been published in a number of books including Glam: An Eyewitness Account, Classic Queen, Picture This/Debbie Harry & Blondie and The Rise of David Bowie 1972-1973. It hasn’t been a bad run for someone who started out studying modern language and literature at Cambridge University in the mid-1960s and had never picked up a camera before.

“I was orientated much more towards literature and poetry. So this opened up my third eye, and I started to play around with a friend’s camera, because I didn’t actually own one at the time. But he came from a wealthy family, and he never used his camera, which is sad. So he let me play with it. Not that I had any intentions. The idea in the late ’60s of seeing photography as some kind of career—well, there weren’t many opportunities really,” he recalled. “My heroes were not photographers—they were crazy poets like the French Symbolists, the English Romantics and the American Beat poets. And of course, all of them consumed copious amounts of drugs in pursuit of their art. So that may have been part of the appeal as well. That was how I looked at my early subjects. Obviously, Syd Barrett, Lou [Reed], Iggy [Pop] and David [Bowie]—I saw them all as being crazy poets. And I certainly saw them as artists—that’s for sure.”

For Rock, the people he started shooting early on would become dear friends with whom he would share experiences and excesses.

“When I was younger, I spent a lot more non-shooting time with people like David, Lou, Syd and Freddie. It was a different and more intimate experience, because these were friends of mine,” he recalled. “We were all similar ages, so it was a different kind of experience. So I have a certain affection for the early characters.”

Having become fast friends with Bowie after meeting him backstage at a gig in Birmingham, England, in March 1973, Rock’s relationship with the late music icon found him creatively collaborating with the Thin White Duke on a new art form—the music video. Among the songs Rock and Bowie gave visual life to where “John, I’m Only Dancing,” “Jean Genie,” “Space Oddity” and “Life on Mars.” For the photographer turned videographer, it was a labor of love.

“All of these were shot for a couple of dollars. But they didn’t really have any outlets for them in those days,” Rock explained. “No one was offering me any money. I wanted to do them and David wanted me to do them, so I just did them. But it was a lot of years before they started to show up. Obviously, David started to pop up here and there on MTV. But nowadays, they are in museums all over the world, including the MOMA. They were inducted a few years ago, along with David’s other videos as part of their permanent collection.”

While Rock was splitting time between London and New York City, the glam aura of the former gradually gave way to the gritty vibe of the latter with the photographer eventually decamping to the Big Apple in 1982. And while he’s best known for his ’70s work, Rock has continued shooting and working. Having traded in cocaine and cigarettes for meditation and acupuncture 22 years ago after undergoing surgery doesn’t hurt. In recent times, he’s shot a number of current artists including The Black Keys, Daft Punk, Alicia Keys, Nas and Father John Misty. The devotion to his craft and refusal to become a relic from the past was a big part of what informed the 2016 documentary SHOT! The Psycho-Spiritual Mantra of Rock and continues to drive him to this day.

“I didn’t like [the documentary] for the longest time, but it got better and better. I know a lot of people speak well of it. I think the tugging and to and fro between Barney [Clay], the director, and myself, produced something original. I didn’t want there to be a lot of talking heads—certainly I was in there with my lips flapping. But it would immediately become a TV documentary, and I didn’t want it to be all that,” he said. 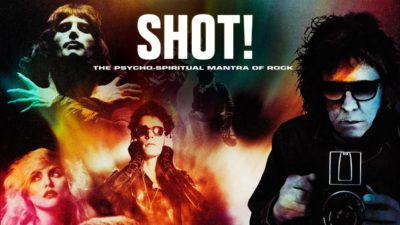 “I’ve shot Janelle Monáe and I’ve shot Lana Del Rey, Snoop Dogg, Mark Ronson—all kinds of characters. Even though I get tagged as, ‘The Man Who Shot the ’70s,’ I do try to remind people that some of the modern work was in the documentary. I remind people that I don’t want to be tagged as some creature from the ’70s. That’s important to me.”

Mick Rock will be appearing at the Mick Rock Iconic Gallery Show on October 20 and October 21 at The Jewelry Studio, 1107 Old Country Rd. in Plainview.
For more information, visit Facebook.com/The-Jewelry-Studio or call 516-933-4166.

Previous articleMeet The Cast Of The Office: A Musical Parody
Next articleThe Loser’s Lounge: Ground Zero For Pop

When it comes to native-born guitar players, Texas has quite the legacy. Dating back to the likes of T-Bone Walker and Lightnin’ Hopkins, the...
Read more
Arts

Founded by brothers Brian and Michael D’Addario, the Lemon Twigs have garnered quite a bit of indie rock cred, thanks to a sound that...
Read more

The Art Of RedZone

There’s nothing like kicking back on a Sunday afternoon, turning on your local NFL game and taking in seven hours of football. But being...
Read more
Long Island News

In the ninth annual Pinstripe Bowl at Yankee Stadium, sophomore Jack Coan led the Wisconsin Badgers to a whopping 35-3 victory over the Miami...
Read more

A Day With The Vanderbilts

It’s time to take charge of your health. Regular health exams and tests can help find problems before they start. They also can help...
Read more

The simple apple. Some bakers would argue that the pomaceous fruit is much more intense than it leads on, worthy of unique utensils. We...
Read more
Food & Leisure

To Sandwiches, With Love

In praise of our greatest kitchen creation Where do I even begin with sandwiches? This is a food item so ubiquitous in culinary pop culture...
Read more
Food & Leisure

Long Island Restaurant Week returns with $29.95 prix fixe menus There is no better time to check out new places to eat than during Long...
Read more