In Memory of Chris Cornell 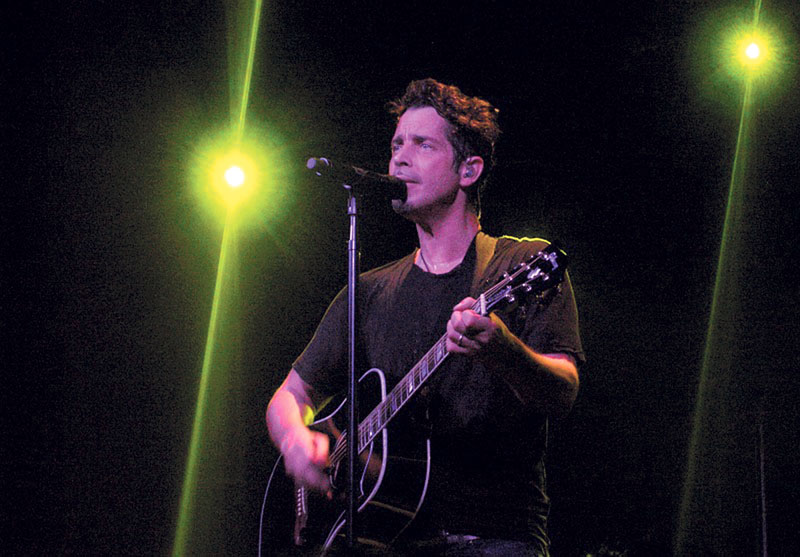 The music world suffered another casualty when Soundgarden founding member and lead singer Chris Cornell was found dead in the bathroom of his room at Detroit’s MGM Grand following a show by his band at the Fox Theatre the night before.

The initial shock of his being gone at 52 was superseded by early reports determining suicide by hanging to be the cause of death. An interview with his widow Vicky revealed that he’d admitted taking an extra Ativan or two (whose side effects include suicidal thoughts), was slurring his words following the concert and that she’d advised security to check on him. The reaction to Cornell’s passing was disbelief and grief over an artist who was not only widely admired for his vocal prowess and range, but artistic sensitivity that was the antithesis to the macho swagger normally associated with lead singers in the hard rock world.

While Cornell was deservedly lauded for his exemplary work with Soundgarden that included seminal albums like Ultramega OK, Badmotorfinger and Superunknown, his musical legacy goes deeper. The year 1991 found him collaborating with friends who would go on to form Pearl Jam for the one-off Temple of the Dog, which was formed in tribute to former roommate/Mother Love Bone singer Andrew Wood, that was also Eddie Vedder’s recording debut.

In the early 2000s, Cornell slide into Audioslave, after former singer Zack de La Rocha left Rage Against the Machine and his remaining three band mates needed a new singer. Guitarist Tom Morello was quoted as saying, “He stepped to the microphone and sang the song and I couldn’t believe it. It didn’t just sound good. It didn’t sound great. It sounded transcendent. And … when there is an irreplaceable chemistry from the first moment, you can’t deny it.” Such was the power of Cornell’s multi-octave voice that not only yielded three Audioslave albums (and musings of a potential reunion in the future), but a quintet of solo outings.

Cornell’s charitable side was consistent through his life, whether it using his Golden Globe-nominated single “The Keeper,” an original song from the 2011 film Machine Gun Preacher and making it exclusively available as part of the “Donate to Download” campaign for Sam Childers’ Angels of East Africa children’s charity, or releasing the charity single “The Promise,” written for the ending credits for the movie of the same name about the Armenian Genocide. Cornell also created the Chris and Vicky Cornell Foundation in 2012, to support children facing challenges, including homelessness, poverty, abuse and neglect.

Cornell suffered from depression early in his life. Ativan is a pharmaceutical drug prescribed as treatment for this affliction and may have been the trigger for his death. One outcome from this tragic loss of life just might be the Seattle native further highlighting the fact that depression is an illness.