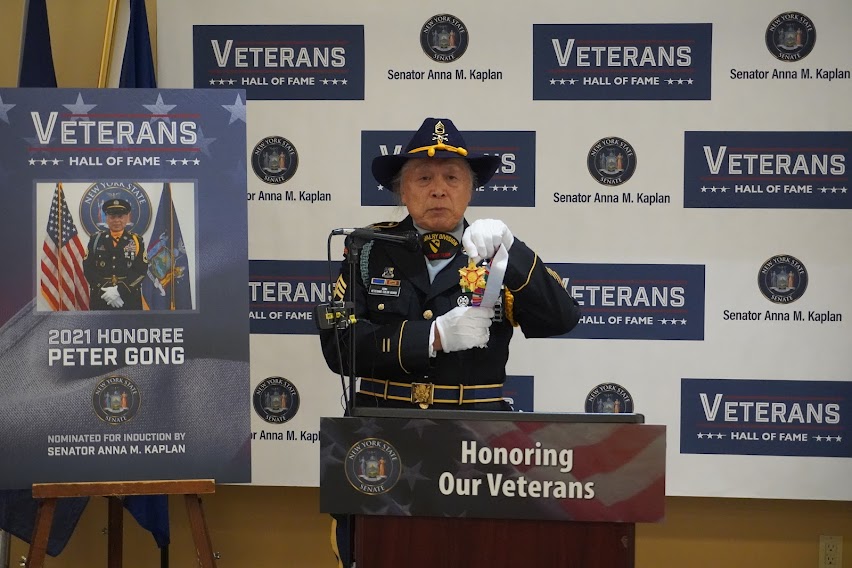 After 28 years of honorable service, Ret. Master Sgt. Gong continues to give back as a dedicated member of the Honor Guard at funerals of fallen service members, is a leader in local Chinese-American civic groups, and a vocal activist against hate crimes.

“We all owe a significant debt of gratitude to the men and woman who have answered the call to serve, and who courageously defended our freedoms in the armed forces,” said Kaplan. “As a young man in the Army, Peter endured malaria, snakes, leeches, and casual racism while air-jumping into the rice paddies of Vietnam-his honor and duty to country unwavering under 60 pounds of gear on his back. Since retiring from the military, Peter has been a cherished hero in our community, and an outspoken advocate against hate and xenophobia. At a time when hate and bias targeting the Asian American community has exploded across the country, Peter’s activism is more important than ever, and it gives me great pride to elevate his voice and nominate him to the New York State Senate Veterans Hall of Fame for 2021 so that everyone across the state can appreciate him for his service and recognize him for the hero that he is.”

Gong said, “I am extremely honored that my community came out to recognize my service as a member of the United States military. After 28 years of service, today I accept this award on behalf of my fellow veterans who have sacrificed so much to ensure the peace and prosperity of our nation and the world. Thank you to State Senators Anna Kaplan, John Liu and all the organizations who continue to pay tribute to veterans across our great nation.”

Liu said, “Peter Gong is an exemplary veteran who not only risked his life to defend our American ideals of freedom and democracy, but who then returned home and continued to serve our country and community for half a century. He remains incredibly active in veterans and Chinese-American organizations, something so meaningful since he was ostracized as a Chinese-American by his fellow servicemen he fought alongside during wartime.”

For more than a decade, the New York State Senate has had a tradition of honoring remarkable Veterans from around the state who have distinguished themselves both in military and civilian life by inducting them into the Senate’s Veterans Hall of Fame, and each year, one Veteran from each of New York’s 63 Senate Districts is selected to receive this rare tribute.

The event included a presentation of colors by the Veterans Honor Guard, led by Gong, an invocation and performance of “God Bless America” by Eric Spinner, chaplain, of the Nassau County American Legion, and remarks by Christine Liu, co-president of the Herricks Chinese Association, Betty Leong, president of the Chinese Center on Long Island, and Thomas Ong, president of the Organization of Chinese Americans (OCA) Long Island Chapter.

ABOUT PETER GONG: Retired Master Sergeant Peter Gong was “one of the first” in his neighborhood when he and wife Irene moved to Herricks four decades before today’s vibrant, diverse community. Now, after 28 years of honorable service – 12 years Army, 16 Air Force, and 20 medals, including for more than 25 helicopter combat missions, M14 rifle marksmanship, and the conspicuous service cross – Ret. Master Sgt. Gong is a sought-after color guard leader, looked up to in local Chinese-American civic groups, and speaking out against hate crimes.

Drafted as a member of the U.S. Army in 1965, then-PFC Gong endured shelling, malaria, snakes, leeches, and casual racism while air-jumping into the rice paddies of Vietnam as an infantryman, his honor and duty to country unwavering under 60 pounds on his back as he dreamed of going airborne.

Born in Brooklyn to parents who emigrated from Canton, China through Ellis Island, a young Peter and his five brothers and two sisters were instilled to never forget their commitment to family and community. While in Vietnam, PFC Gong postponed his own well-earned R&R so that he could visit his not-yet-immigrated sister in Hong Kong.

Fortunate to return from war, Master Sgt. Gong remained active in the US Army Reserve, becoming an E7 Platoon Sergeant First Class, but it was with the Air National Guard Rescue Unit out of Roslyn where Ret. Master Sgt. Gong realized his dream of going airborne. As a civil engineer for plumbing, he traveled to the UK and later the tense Korean DMZ.

After retiring in 1997, Ret. Master Sgt. Gong continues to work with trained volunteers as the honor guard at the funerals of fallen US military service members. Ret. Master Sgt. Gong has participated in 175 burials – through rain, snow, and heat, seeing to the proper presentation of the folded flag to the heartbroken, or standing graveside for those who have no one to attend.

Now the proud father of two and blessed grandfather of three, one of Ret. Master Sgt. Gong’s donated American flags flies proudly outside of Kaplan’s district office, a personal connection to patriotism.