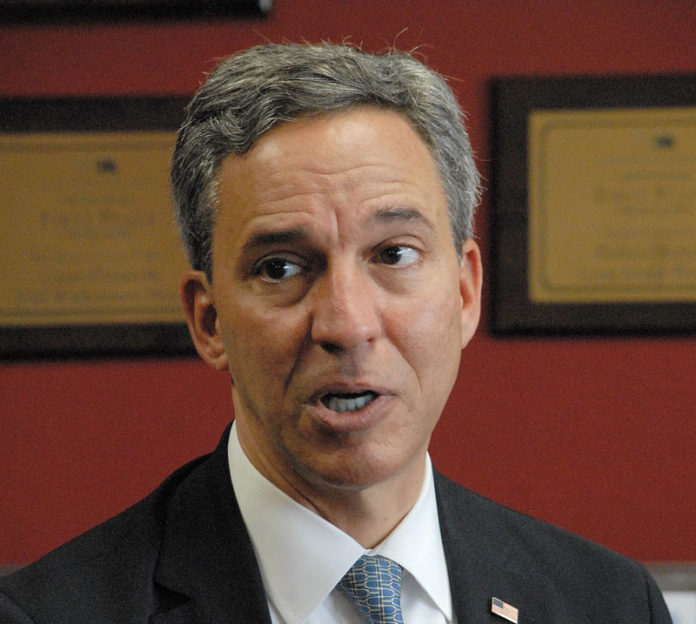 With the Nov. 7 Nassau County Executive election fast approaching, and a change in regime in store in the wake of the controversial Ed Mangano administration, Republican candidate Jack Martins recently partook in a roundtable discussion with Anton Media Group in which he laid out his campaign’s main platforms.

Among the issues Martins hopes to address if elected are ethics reform, jobs, finances and the county’s opioid epidemic, which Martins outlined as a “catastrophic” problem that’s “decimating an entire generation.” He proposed utilizing one of the two vacant floors in Nassau Medical Center as a long-term and short-term treatment facility for addiction, feeling that the apparent lack of similar facilities in the county has made counteracting the epidemic all the more difficult.

“We need to put people on the path to sobriety,” Martins said. “We all understand what the challenges are in our suburban communities; no one wants to have a rehab center in their backyard. Let’s go find a place where we already have space.”

Martins also expressed confidence in his ability to craft a budget, citing his past experiences in Albany as well as his understanding of certain problem areas in the county’s budget, particularly the issue of overtime payments. He suggested the county add “more personnel to do the baseline work that avoids you having to pay people time-and-a-half.”

“You look at things like overtime and you have a budget that has $1 billion in payroll, about $400 million in benefits that are tied to that payroll, but yet the overtime is about $125 million,” Martins said. “Put that into context [with] most municipalities, you’re looking at a ratio of about 3-4 percent. We know that overtime is necessary for emergencies, but it cannot be used for actual, regular operations.”

In explaining his refusal to meet with current Nassau County Executive Ed Mangano regarding the next budget, Martins reasoned, “this will be my budget.” However, he acknowledged that the presence of NIFA created complications and restraints in the process, and outlined his desire to get the county out from under NIFA’s control.

“It’s shameful. The fact that we haven’t had the ability under both democrats and republicans to deal with this issue, we’re better than that,” Martins said. “The ability to pay our bills and find those efficiencies is important. I’ve made that commitment. I’ve told people we would have NIFA out in two years. That’s the goal.”

Martins also blamed the county’s dependence on NIFA for the fact that Nassau currently has no Fortune 500 companies. Furthermore, he noted that Nassau is one of only two New York counties to use a county-wide, rather than town-based, assessment system, which he believes may be something to reevaluate.

“There are more challenges to the assessment system in Nassau County then the rest of the state combined,” Martins said. “Maybe it isn’t the effort that’s lacking. Maybe it’s the fact that we have a different model and we have to look at what the better model is out there.”

Martins summed up his vision for the county by stating, “If you’re going to complain about something, you’d better be prepared to do something about it, and if you can, it’s your responsibility to do so. I can, I have and I’m running.”