Making Magic On Broadway: Al Pacino And His Love Affair With The Theater 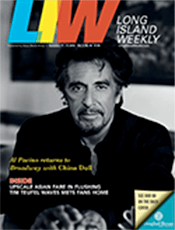 One of the greatest American actors, Al Pacino’s greatest love has always been live theater, a place where he found a home early on.

A method actor who learned his craft as a student at the feet of coaches Charles Laughton and Lee Strasberg, the East Harlem native honed his chops at the HB Studio and The Actors Studio (of which he is currently a co-president along with Ellen Burstyn and Harvey Keitel). Before making his Broadway debut in 1969’s Does a Tiger Wear a Necktie? (for which he won a Tony Award for Best Supporting Actor in a Play), Pacino won an Obie Award for Best Actor for his role in Israel Horovitz’s The Indian Wants the Bronx the prior year. In subsequent decades, he’s returned to the stage while compiling quite the impressive filmography.

And while his stage roles have ranged from his involvement as part of Joseph Papp’s Shakespeare in the Park (Julius Caesar, The Merchant of Venice) to more personal projects (a 1985 revival of Heathcoate Williams’ 1969 Off-Broadway play The Local Stigmatic), the terse and often profane dialogue of renowned playwright David Mamet has made him the perfect foil for Pacino’s streetwise sensibilities and made the Chicago-born author a favorite creative partner for his New York City counterpart.

The latest Mamet/Pacino project is the two-character Broadway play China Doll, which finds Pacino playing billionaire Mickey Ross alongside the lead’s assistant Carson, played by Christopher Denham. It’s a role that Pacino told Playbill magazine he was very excited about. “We’ve done four projects together and the opportunity to create a new character in the David Mamet canon was an opportunity I couldn’t pass up. Dave gave me China Doll, a new play he had written for me, and it blew me away.” Here are five notable roles the former Bronx resident has excelled in whenever he’s returned to the Great White Way.

1. Does a Tiger Wear a Necktie?

In this three-act Don Petersen 1969 play, Pacino played a teen addict named Bickham, for which he won his first Tony. His portrayal of a junkie not only had Newsweek’s Jack Kroll describe Pacino as possessing “the choreography of a hood, with a poetic soul,” but prepped him to play the lead heroin addict in the 1971 drama The Panic in Needle Park, which caught the attention of director Francis Ford Coppola. We all know what happened after that. 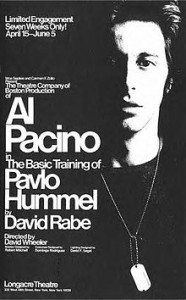 2. The Basic Training of Pavlo Hummel

Here, Pacino took on the lead role in this 1977 Broadway production of David Rabe’s Vietnam drama that landed him a second Tony Award and first for Best Leading Actor in a Play. Opening in a Saigon brothel, this production’s cast included ubiquitous movie character actor Lance Henriksen. 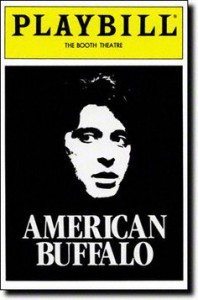 The first time Pacino and Mamet joined forces was in 1983 at the Booth Theatre when the former took on the lead role of Walter “Teach” Cole , which was originally played by Robert Duvall when the play made its Broadway debut in 1977.

4. The Merchant of Venice

Having starred as Shylock in a 2004 film version of this Shakespeare classic alongside Jeremy Irons, Joseph Fiennes and Lynn Collins, Pacino reprised his role in a 2010 Shakespeare in the Park production that moved to Broadway the following year. Rounding out the cast was Lily Rabe (Steel Magnolias), Jesse L. Martin (Rent) and Ruben Santiago-Hudson (Jelly’s Last Jam). Pacino’s Shylock landed him a Tony nomination for Best Leading Actor in a Play. 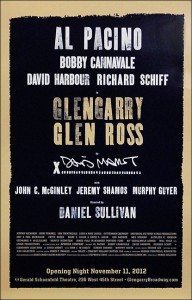 Even though this Mamet gem had its 1984 Broadway debut with Joe Mantegna playing hot-shot salesman Ricky Roma, the playwright’s highest profile drama is best known to the most casual Pacino fan from the 1992 film adaptation, where he took on the Roma role. Pacino was a part of the 30th anniversary revival as part of a cast that included John C. McGinley, Richard Schiff and Bobby Cannavale. Pacino wound up taking on the role of sad-sack Shelly Levene, which had been played by Jack Lemmon in the film.