The violin is such a classically beautiful instrument. But nobody plays it like Lindsey Stirling. The violinist is coming to the Beacon Theatre on Dec. 12 as one of the stops on her tour, where she will be performing Christmas classics and songs from her Warmer In The Winter: Deluxe Edition holiday album.

“It’s awesome! We’re having so much fun,” said Stirling of the tour, adding that she absolutely loves doing Christmas shows. “We did a Christmas tour last year and it’s like spreading little bits of magic every night for the crowd. We get to share joyful melodies, more of the heartfelt songs and it’s really cool to feel that magic at the end of the show.”

Stirling’s album, Warmer In The Winter: Deluxe Edition, came out in October and is a rerelease of her holiday album with five new tracks. Songs like “Dance Of The Sugar Plum Fairy,” “Carol Of The Bells,” “Somewhere In My Memory” and “Home For The Holidays” are guaranteed to get you in the holiday spirit.

“I loved how ‘Santa Baby’ turned out; it’s never been one of my favorite Christmas songs but the rendition worked out really well,” said Stirling, adding that “I Wonder As I Wander” is perhaps one of her favorite covers she has ever done. “It’s an old Celtic hymn and I love it. I turned it into a really big electronic song and no one has done it like this before.”

The self-proclaimed pixie violinist vaguely recalls the first time she picked up a violin. She was 6 years old and begged her parents for lessons. 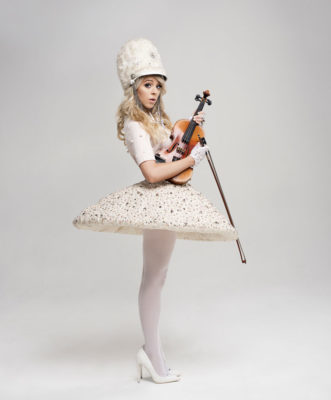 “My teacher sent me home with a cereal box and paper towel roll taped to it that I could practice holding before I tried a real violin,” she said. “It’s not a natural instrument. It’s a very awkward and weird position in hold.”

Stirling loves to imagine songs in new ways, it’s what she is known for. Her musical inspirations run the gamut of a varying list from John Williams—she covets his greatest hits album—and Nikolai Rimsky-Korsakov, whose Scheherazade Suite made her fall in love with the violin.

“Evanescence inspired my high school years, Skrillex taught me how to dubstep and Pink inspires me as a performer,” she said.

In 2007, Stirling created her YouTube channel in which she presented choreographed violin performances. Three years later at the age of 23, Stirling got her big break on America’s Got Talent, as a quarter-finalist on the show’s fifth season, which described her as a “hip hop violinist.”

“I didn’t know what else to call myself or describe what I do. I still don’t,” she said. “I combine so many different styles of music and I love to dance around and pixie across the stage like EDM fusion.”

In 2017, Stirling danced across the ballroom of Dancing With The Stars, paired with professional Mark Ballas in the show’s 25th season. While she has loved dancing her entire life, Stirling’s parents could only afford lessons for one passion, and she chose violin. She credits the show for allowing “the romance with dance to finally happen.”

“I never had formal dance training, I taught myself. Dancing With The Stars was a dream come true and I never took it for granted,” said Stirling. “I worked so hard and had one of the best ballroom coaches as a partner. When as an adult do you have the opportunity to do that? It was incredible and so much fun.”

To this day, Stirling is grateful for her time on Dancing With The Stars as it “brought to life the performer side of me that had gotten a little stale.”

“It was a magical experience and the hardest thing I have ever done,” she added.
Stirling is currently working on new music and after her tour, she plans on debuting a two-part EP, releasing one part midway throughout the year and the other half the end of the year. She is also working on a Broadway musical as well.

Basking in the glow of her Christmas tour, Stirling shared that she loves traditions that bring families together and take you back to your childhood.

“Christmas is like a time capsule that holds memories and document the past and present in a really cool way,” she shared.

Warmer in The Winter: Deluxe Edition is available in Target, Barnes & Noble and Amazon. For more information on Lindsey Stirling and her tour, visit www.lindseystirling.com.