Although my father was good at household projects and repairs and his father was a carpenter, the “fix-it” gene passed right over me. Surprisingly...
Read more
Pets

Certified dog trainer Michelle LaMarca Knapp shares her insight on best methods Introducing your pet to a new family member is a task that can...
Read more
Long Island News

September 30 (or October 5) is Census 2020 response deadline Editor's Note: As this went to press, there was a dispute between the Trump...
Read more
Arts, Music & Entertainment

Having known singer/songwriter/multi-instrumentalist Brandon Gurba since he was 16, I was already aware that he possessed a degree of musical talent almost eerie in...
Read more
TOP STORIES

Feeding off the inspiration of the many towns her family lived in along that rural interstate due to her late father’s vocation as a visiting college professor—places like Vicksburg, MS and Minden, LA—Williams has recorded 14 songs populated by the same kinds of blue collar individuals she came to know growing up in the Deep South.

The Louisiana native and her longtime rhythm section of David Sutton (bass) and Butch Norton (drums) were joined in by guitarists Bill Frisell and Greg Leisz. The latter duo, who played on Williams’ 2014 double-CD set, Down Where the Spirit Meets the Bone, wound up bringing a very ethereal ambiance to the tone of the current project. It’s particularly effective on character-driven fare like the sleepy jazz arrangement that tells the tale of a junkie in “I Know All About It” and the bluesy “Doors of Heaven,” which finds Williams taking on the world-weary voice of a dying person ready to move on. And while a cover of Bruce Springsteen’s “Factory Man” suggested by her manager/husband Tom Overby had some interviewers nitpicking that a cover by a New Jersey-based artist didn’t fit in with the southern motif of the others songs, for the singer-songwriter, the contributions of Frisell and Leisz and the song subjects wound up making for a perfect marriage. 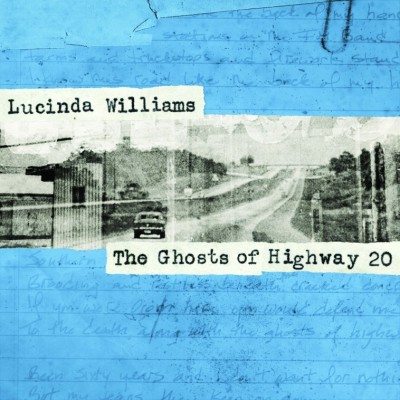 “It’s such a great-sounding record. Everybody loved the last one—it’s great too, but this one has this thing where people are saying it’s so deep. I was doing a radio interview with Steve Earle for Sirius XM and he said, ‘The thing I think with this album is that I’ve never heard you sound like this before’” she recalled. “[The Ghosts of Highway 20] represents working people and it doesn’t matter it’s the Midwest, Northeast or Southeast. It’s about working class people and the struggles they go through, Tom’s family went through and my family went through. My dad didn’t work at a factory but I grew up wearing hand-me-down clothes and we had secondhand furniture. I shopped at thrift shops and we lived in rental houses. We never owned a house until we settled in Fayetteville, AK in 1971.”

Looming large on this record is the spirit of Williams’ late father Miller, a poetry and literature professor who passed away from Alzheimer’s disease on Jan. 1, 2015. Not only does she sings of the “Slayer of wonder, slayer of words/Murderer of poets, murder of songs” in the aching minimalist shuffle “If My Love Could Kill,” but she took one of her father’s poems and set it to music. It’s an exercise she’d wanted to do for years and wound up doing on the last record via the gorgeous acoustic opener “Compassion.” As she admits, transposing from a poem to a song is an inexact science she’s getting the hang of.

“That’s the thing, when you’re singing, the words kind of have to roll off. It’s so different than when you’re reciting a poem and you have to come up with some sort of refrain, hook or line,” she said. “But now I’m excited because I feel like I’ve kind of figured out the formula, sort of. The other thing is that both of these poems are really short, concise poems. There’s this one other older poem of his that I’ve always loved called, ‘Why Does God Permit Evil’ but it’s a much longer, rambling poem. That was the one that for years and years I’ve tried to turn into a song and I’ve never gotten anywhere with it. When I sat down to do ‘Compassion,’ it was a whole different thing working with a shorter poem. Basically, I had to stretch it out, repeat some of the lines and maybe move some of the words around so they rhyme. Again, not all poetry rhymes in the way that songs rhyme. That’s basically what I did and I was pretty proud of myself, I have to admit.”

And while Williams and Overby have both gone through the heartache of losing parents, the love the two have for each other has sparked a prolific creative streak for Williams that has yielded a pair of solid double CDs in the past four years. It’s quite a leap for someone who unfairly gained a reputation as a perfectionist and slow worker because of the six-year gap between her fourth and fifth albums in the 1990s.

“I’m not really sure [where this creative burst] has come from. It’s this period in my life and being in this place where I feel where I’m comfortable. It’s given me more freedom being happily married and in that kind of situation that’s forcing me to push myself to find other things to write about besides unrequited love,” she said. “I have to be in a certain state of mind to feel like writing. The other side of it all is that you can draw on those things that created the pain. I just look at it like an endless well where I dip into it and pull stuff out that goes all the way back into my childhood and not just my own life. It’s really been liberating to be in that place as a writer.”