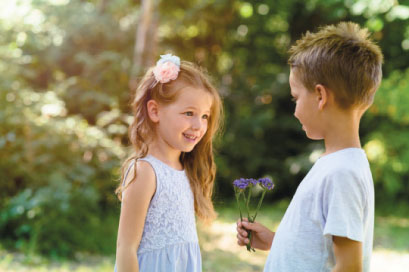 When was the last time you saw a gentleman hold a door for a lady? How about a gentleman pulling out a chair for a lady to sit down? I was watching the movie The Intern the other night and at one point, the gentleman reached in his pocket, pulled out a white handkerchief and handed it to the lady he was with because she was crying. The lady told the gentleman that she hasn’t seen a man carrying a white handkerchief for a long time. He explained that men do not carry handkerchiefs for themselves, they carry them to give to a lady when she needs one.

Of course, being an etiquette consultant, I was intrigued by the statement, so I did some research. Turns out the information is correct. There numerous reasons to carry a handkerchief, but the aforementioned is one of them. I began thinking about the whole tradition of chivalry and how it has changed.

Centuries ago, women were identified as being the “weaker sex,” who needed to be protected and taken care of. This is the concept out of which chivalry was birthed. As centuries and generations progressed, this viewpoint began to change. In the 1920s, an age identified as “women’s suffrage,” women were given the right to vote. Our quest for equal rights continued after that movement. Then fast forward to the 1960s and 1970s when the Women’s Liberation Movement began. These movements began to give us equal rights but caused women to be viewed in a different light and acts of chivalry began to fade.

Somehow, the fight for equal rights was interpreted to mean we no longer needed to have doors opened, heavy items carried for us, handkerchiefs given to us, etc.

Merriam-Webster Dictionary gives one of the definitions of chivalry as “gallant warriors or gentlemen.” For me, that means chivalry has less to do with the rights or strength of a lady and more to do with men being gentlemen, which is defined as “a man of good family, breeding or social position.”

Some ladies, like myself, would like men to continue to be gentlemen doing those kindnesses for ladies that make us feel special. Other ladies feel these actions are condescending. So, what should a gentleman to do? Perhaps gentlemen should strive to be just that, gentlemen, unless ladies ask you not to. It is one of those areas of life, connected to etiquette, that we struggle with daily. As with other rules of etiquette, it is up to each individual to do their best to follow rules to the best of their ability.