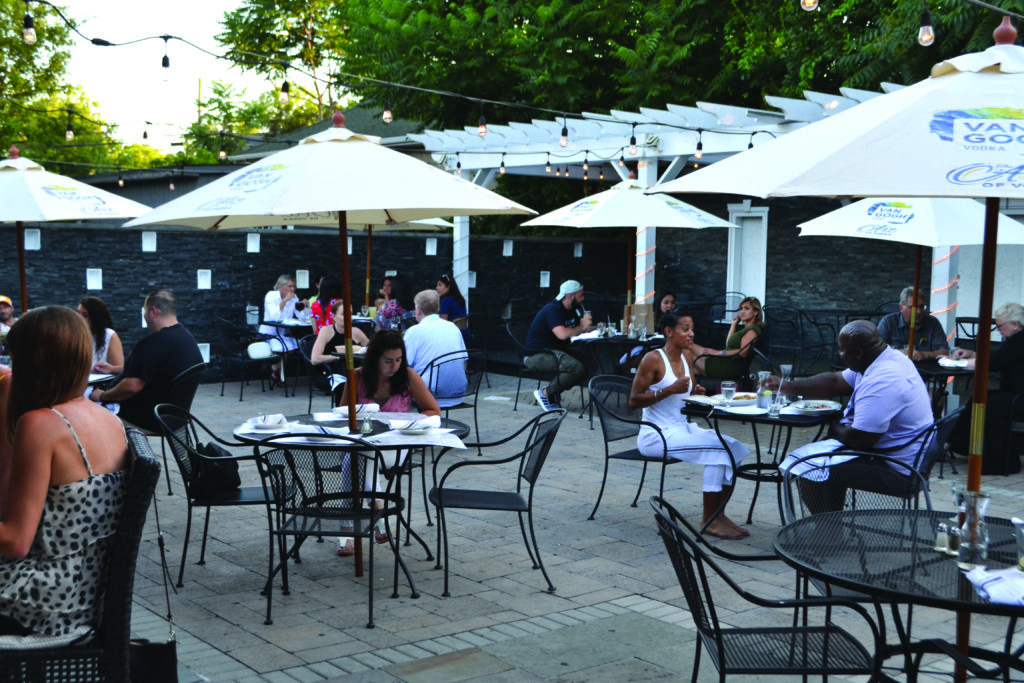 Bill Barry knows a thing or two about the importance of timing. The Floral Park resident made the switch from longtime bartender in the local restaurant industry to founder and co-owner of the recently opened Uptown Taco in Floral Park this past fall when opportunity serendipitously arose when Oak House Mexican Kitchen closed its doors.

“Friends of ours owned Oak House and decided to move to Ireland to pursue their dreams, so it was the perfect spot,” Barry said. “The Oak House was an authentic Mexican restaurant. We played around with a couple of concepts. Floral Park is family-oriented. We wanted it to be a place where people could bring their kids or meet up with friends for a drink.”

To fill a niche in the community the concept was born for Uptown Taco, which is family owned and operated by Barry, his wife, Erica, and brother-in-law and sisters-in-law, Lou and Diane Ventura. The taco restaurant gets its moniker courtesy of its location on Tulip Avenue.

“We always called this area ‘uptown’ when we were kids,” Barry said. “We wanted to tie that local nostalgia into the restaurant.”

The family began renovating the space by incorporating bright colors and original artwork to create a welcoming South-of-the-Border vibe. After updating the restaurant and securing its liquor license, Uptown Taco was ready to open in late winter. But timing had other plans.

The restaurant hosted a small soft opening on Feb. 29—nine operating days prior to COVID-19. It ultimately forced the restaurant to close its tables to the public.

“The whole world just stopped,” Barry said. “It was tough. But it wasn’t just us. It was a little different for us because we had just got started, but it was the whole world going through the same thing.”

Like Uptown Taco, COVID forced Osteria Morini in Roosevelt Field to abruptly close its doors just as the Italian restaurant was beginning to pick up momentum following its fall 2019 grand opening. With its flagship in Manhattan, plus additional locations in New Jersey and Washington, D.C., Osteria Morini is operated by the award-winning Altamarea Group.

Founded by Ahmass Fakahany and chef/partner Michael White, the group currently owns and operates 12 restaurants worldwide, many of which consistently receive top recognition and acclaim by the James Beard Foundation, Zagat, The New York Times and the Michelin Guide. Osteria, which means host in Italian, has spent the last several months re-imagining their safety protocol in the wake of the outbreak on Long Island.

“From the beginning, implementing the highest level of safety protocols was a priority, not only for our clients but for our staff as well,” Fakahany said. “We have trained extensively above and beyond the required regulations, from sanitization and mask requirements to contactless ordering and payments via QR codes.”

In mid-June, as New York entered Phase II, Osteria Morini was able to reopen for curbside pick-up and delivery, serving up some of its signature dishes such as Cacio e Pepe salad, rigatoni, branzino and tiramisu for dessert.

“Osteria Morini is ready to keep evolving and pivoting with the times,” Fakahany said. “Everything we do begins and ends with our clients, and more than anything, we want to welcome them back through our doors and make it their home away from home.”

Uptown Taco was quick to revamp its business model to cope with the changing times, as well. Initially, takeout wasn’t a significant aspect of Uptown Taco’s services, but the family adjusted to keep the kitchen open to the public, while following statewide shutdown protocols.

“We thought that takeout would only be a small part of the business, but the pandemic showed us that it is going to be a bigger part of the business plan than we originally thought,” Barry said. “Tacos travel well. It is a food that lends itself to takeout. At first, we were just learning how to be a sit down restaurant and then we quickly had to learn to be a takeout restaurant. Now that we’re in Phase IV, we have outdoor dining, which also wasn’t a part of our original plan.”

A New Way Of Dining Out

In late June and early July restaurants across New York were once again allowed to invite diners back with a combination of indoor and outdoor seating, proper social distancing still in place. Uptown Taco, which did not initially have outdoor seating, was permitted by the village to transform a row of parking spots outside the restaurant into a makeshift patio with tables and an outdoor bar, christened “La Quarantina.” The restaurant is also opened at 50 percent capacity inside.

“It has been busy, the support has been great,” Barry said. “We are new restaurateurs so we weren’t stuck in our ways and we were easy to adapt. We’re the type of people who ask, ‘what’s next?’ It took planning and communication, a lot of late nights, but even though this pandemic made things stagnant, we still wanted to grow.”

While it hasn’t been open long, Uptown Taco, which sources many of their ingredients from Long Island farms, has gained a loyal following. Its menu includes entrées like Mexican cheesesteak and a wide range of tacos, including vegan options. Though its carne asada taco and Koren short rib taco are instant favorites.

Since the beginning of Phase IV, dozens and dozens of local eateries have reopened with provisions, including the historic Louie’s in Port Washington (see the cover image for a peek at its outdoor dining set up) and Cena 081 in Westbury. With the current reduced capacities, Osteria Morini is currently seating up to 36 outside and up to 29 inside.

“Reopening was like a renaissance for us,” Fakahany said. “There is so much promise for this restaurant and location, and we are proud of the standard of our Italian cuisine. In some, we are lucky, as we had always planned for an outdoor ‘al fresco’ layout so it was easy to pull together quickly when the time came. We are eager to get back to serving our clients—that’s the energy we thrive on.”