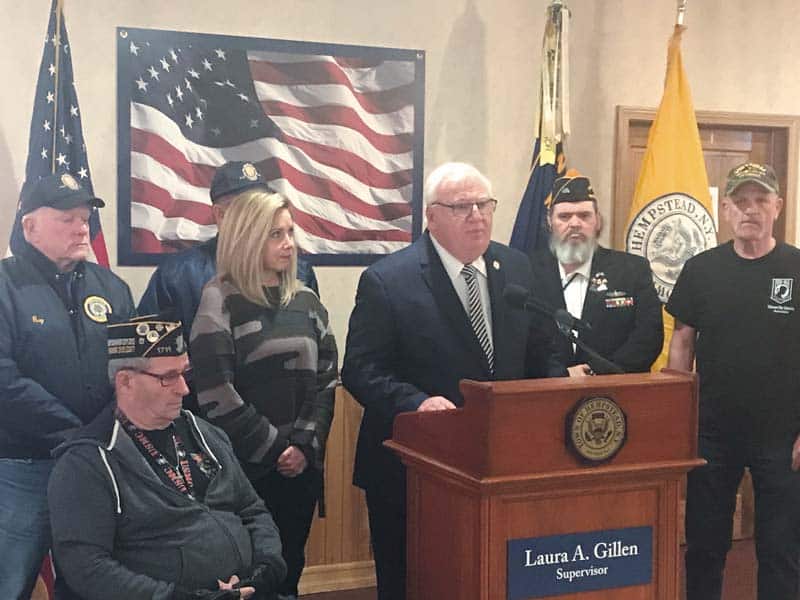 State Senator John Brooks and Town of Hempstead Supervisor Laura Gillen recently held a press conference with dozens of local veterans to speak about a state bill that would allow any municipality to adopt tax exemptions for active duty personnel. Bill S2930A, written and sponsored by Brooks, would also allow for additional exemptions to any service members currently deployed in combat zones such as Iraq, Afghanistan and Syria.

“Currently, active duty members of the United States Armed Forces do not qualify for the property tax exemptions afforded to veterans,” said Brooks. “This bill recognizes that those who volunteer to serve our country should be afforded benefits in recognition of their service, and willingness to make the ultimate sacrifice for their country.”

“Long Island has the second-largest veteran population in the entire United States, with hundreds of resident’s right here in the Town of Hempstead, America’s largest township, who are currently serving and fighting for our country,” added Gillen. “It’s about time we start fighting for those who are fighting for us.”

New York has more than 20,000 active duty military personnel and nearly 30,000 reserve troops that can be activated at any time. Long Island alone has the second-largest veteran population in the United States, with hundreds of resident homeowners from the Town of Hempstead who are currently serving their country abroad in uniform.