When Allen John Pilate III heads off to the United States Military Academy Preparatory School at West Point on July 19, it will be the fulfillment of a lifelong dream. It’s one that will have him be the first in his family to serve in the military.

“I’ve always wanted to go there—it’s always been the dream school for me,” he said. “It’s a perfect combination of getting a top tier education, serving in the military and playing lacrosse.”

Given the fact that Massapequa’s graduation ceremony is on July 22, Pilate was given the opportunity to put on his blue cap and gown and receive his diploma via a special socially distanced event held in the auditorium lobby on July 2 in front of a small gathering of family members, teachers, coaches, administrators, guidance staff and new high school principal Barbara Lowell.

Brian Conboy, interim principal for the past few years, opened the short program by playing Pomp and Circumstance on his phone.

“Today, you are going to be the first graduate of the Massapequa High School Class of 2020,” Conboy told Pilate. 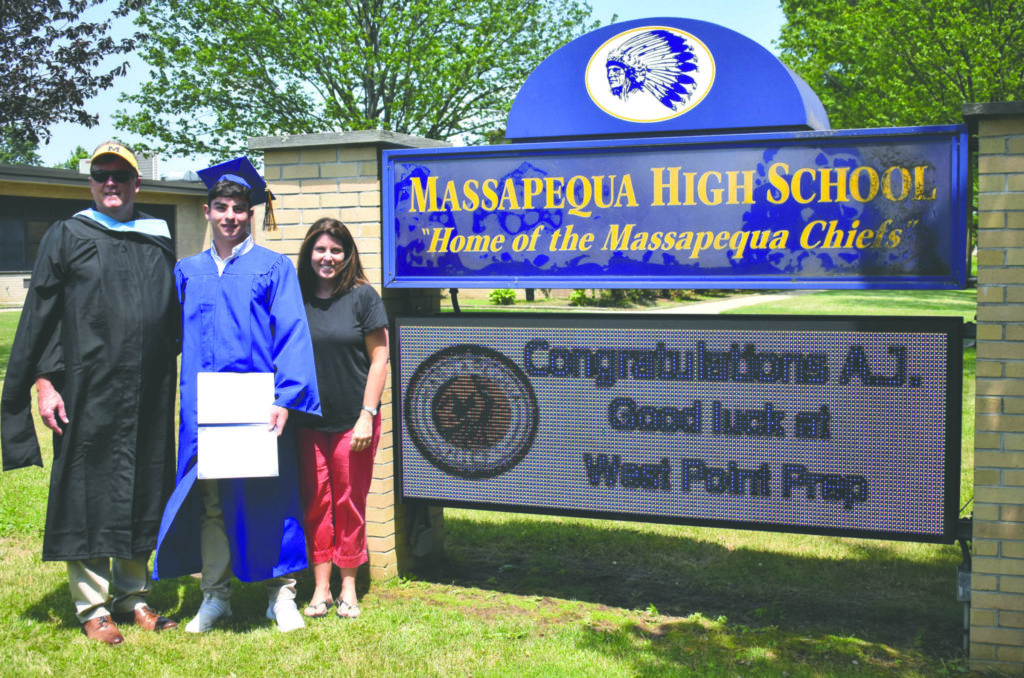 Born and raised in Massapequa, Pilate grew up alongside older sister Kayla, currently a junior nursing major at Molloy College. A consummate athlete, the future West Point cadet spent his younger waking hours “practically living at Marjorie Post Park,” where he played a number of team sports, including football. The Fairfield Elementary School alum’s zeal for competition later found Pilate wrestling and becoming an elite defender, which led to his being named an All-County lacrosse player and a place on Massapequa’s 2019 state championship team. No slouch in the classroom, Pilate was a member of the National Honor Society and Peer AIDS Educators Club and took several Advanced Placement and college-level course, many of which he enjoyed immensely.

“AP Calculus was pretty fun because I got one of the best teachers for that class,” he said. “A lot of the engineering classes were pretty fun. I had a lot of my friends in my sports marketing class in 10th grade.”

While the impact of COVID-19 gave Pilate’s senior year quite a twist, he still managed to navigate these obstacles as well.

“I think I handled [the situation] well,” Pilate said. “We went to online classes. It was complicated at first because not even the teachers knew how to handle everything. But we eventually got acclimated to it. It wasn’t bad at all. I had maybe two or three hours of work a day, so it wasn’t terrible.”

Pilate’s drive and eventual admission to West Point is all the more admirable given the fact that approximately 1,300 cadets enter the Academy each July, with about 1,000 of them eventually graduating. A self-described hands-on person, Pilate is looking to study mechanical engineering and eventually become an engineer in the Army’s special forces. In addition to the Massapequa native having to apply directly to the academy, he also had to secure a nomination from a member of Congress, in this case it was the recently retired Peter King. Pilate shared that applying to the Point was rather complicated.

“There is a portal where you have so much paperwork to fill out,” he recalled. “I had to get my recommendation letters—there were at least four of them—mostly from my teachers. After that, there was another 20 things I had to fill out. It was a whole long process.”

In heading up to West Point, Pilate will also be subjected to a pandemic protocol that ensures the student body will be able to proceed forward into their semester in a safe and measured manner.

“Once I get up there, I get a COVID test right away,” Pilate said. “I’m not sure how long it takes, but if you test positive, I think you quarantine up there for two weeks. If you’re negative, then you obviously do the normal stuff. Everyone is going to have to wear a mask. I saw the rooms back in January. They’re not super-close quarters. So that’s good and I don’t think they have to set up any kind of specialized social distancing. Once we test negative, we’re all essentially living in a bubble.”

With this latest chapter of his life looming, Pilate is eager to see how his future unfolds.

“I have to serve the first five years after I graduate,” he explained. “If I like it, I guess I’ll stay in it. But mechanical engineering is one of my favorite things. I love building stuff.”