Catching Up On Vitamin D

Holocaust education is mandatory in New York State, but one local writer wants Nassau County schools to use his father’s incredible story from World War II in their curricula.

Sherwin Gluck published Private Good Luck last year, sharing details of his father’s escape from Czechoslovakia, his life as a soldier fighting the Nazis and postwar life. Now, South Woods Middle School is the first of what Gluck hopes are many regional schools to add the memoir to its classes. Gluck, a lifelong Syosset resident, believes this will personalize the experience of learning about the Holocaust for students.

“In 1938, his older brother came to America,” the author said. “At that point, the Czechoslovakian government collapsed. My dad and his siblings wanted to come to America, but they were trapped in this limbo. In February 1940, he, his brother and two sisters came to America.” 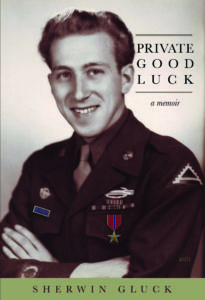 The Gluck family settled in Ohio. Within three years, Irving joined the U.S. Army. He was off to war, returning to Europe to save his people.

“But he wasn’t sent to battle because he wasn’t a citizen yet,” Sherwin said. “A federal judge arrived and approved his citizenship. Then, they sent him to Naples into combat.”

The memoir walks readers through life as a Jew in Europe, coming to America before finding out what happened to Gluck’s entire family that remained in Europe.

Gluck said this book is perfect to teach because of not only the local connection, but also that he has hundreds of records, including death notices from the Nazis, letters from his father and his father’s neighbors and more. He actually sent them to the United States Holocaust Memorial and Museum in Washington, D.C., which will publish them online as part of a growing database of records.

“What I want them to know is that living among you are people who went through this,” Gluck said. “Here is proof. I show Nazi records and you can hear a pin drop. Children are astounded. I would love to see it used with the collection of letters.”

South Woods is adding the memoir to its curriculum on the cusp of the Claims Conference’s stunning study that shows New Yorkers lack knowledge about the Holocaust. About 20 percent of millennials and Gen Zers in the study from the state believe Jews caused the Holocaust, while 58 percent of those surveyed in New York couldn’t name one of the 40,000-plus concentration camps or ghettos created by the Nazi regime. New York is one of 15 states that mandates Holocaust education in schools, but the guidelines for it are vague.

To purchase Private Good Luck, search for the title on the internet or visit your local book store.

Ice Cream In the Cupboard film reflects disease’s reality According to the Alzheimer’s Association, up to five percent of the more than five million Americans...
Read more
Arts, Music & Entertainment

Having been a fan of the show for years, The View’s Sara Haines never could have imagined that one day she would be sitting...
Read more