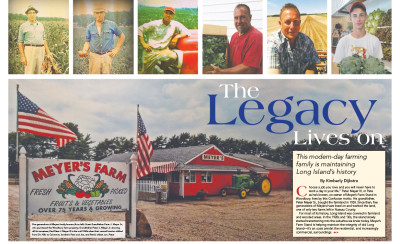 Choose a job you love and you will never have to work a day in your life.” Peter Meyer IV, or Pete as he’s known, co-owner of Meyer’s Farm Stand in Woodbury, lives by this Confucian motto. His great grandfather, Peter Meyer Sr., bought the farmland in 1924. Since then, five generations of Meyers have lived on and worked the land, one of only two farms left in Nassau County.

For most of its history, Long Island was covered in farmland and wooded areas. In the 1920s and ’30s, the island slowly started transitioning into the suburbia we know today. Meyer’s Farm Stand is helping maintain the integrity of old Long Island—it’s an oasis amidst the residential, and increasingly commercial, surroundings.

Pete, Pete’s father (also named Peter after the family’s patriarch) and brother Joe are all partners in the business. Pete’s sisters, Jill and Jackie, live in the house their great grandfather built on Piquets Lane. Jackie sells freshly baked pies, cakes, cookies, brownies and other treats at the farm stand. She makes something different every day to keep customers on their toes. Jill does the bookkeeping with their mother Terry. Every family member participates in some way, large or small, harkening back to the days when every business was a family business.

Originally 30 acres, the Woodbury farm now measures 10 acres. Like most potato farmers, Peter Meyer Sr. fell on hard times in the 1930s. He survived the depression by selling part of the land to neighbor Edward Tinker, whose estate became the Syosset-Woodbury Community Park residents enjoy today. Throughout the years, the Meyer family has rented and owned several other plots of land around Long Island. In the late ’50s, they acquired 100 acres in Calverton.

Every day from March to December, the Meyer men drive fresh produce and plants the 45 miles from Calverton, where the majority of the farming is done. “We like to think of it as bringing the East End here,” Pete says. “The price of diesel and gas for three trucks every day gets expensive, but we have a knack for it.”

Customers appreciate the easy access to super fresh, locally grown produce at low prices that even beat the sales at supermarkets. In 2007, Nassau County purchased the development rights to the Woodbury property. The land must remain a farm forever, regardless of who owns it.

“The people wanted to see it continue for generations,” Pete says. Tens of thousands of acres on the East End have had similar preservation agreements in place since the late 1960s.

The farming industry has changed over Pete’s lifetime, for the better, thanks to technology. The Internet allows him to order seed from across the country, and advances in transportation allow it to be delivered to his doorstep the next morning. New equipment, like trucks, tractors and forklifts have made farming easier. Pete jokes about giving it all up if using horse-drawn machinery were still an industry standard.

Fertilizers, pesticides and other chemicals are stronger now, giving Pete the option to use less. None of his produce is certified organic, but he doesn’t spray some crops and uses limited amounts on others. “Nothing will attack it when it grows that fast,” he says of lettuce and other quick-growing crops.

The landscape also changed a great deal in Pete’s lifetime. He remembers when the Geico building across the street was the only structure around for miles. “That was the only building that was there when I was born,” Pete recalls. “I could stand at my house and look straight across to the Long Island Expressway when I was a kid.”

Meyer’s Farm Stand primarily grows vegetables. During spring, flowers are in high demand, with Mother’s Day being the biggest flower-selling day of the year. “From May first to the beginning of July, flowers are on everyone’s minds,” says Pete.

All of his customers want to plant flowers while the weather is nice, but not yet hot enough to spend time at the beach. They return on a weekly basis to see what new blooms they can take home to fill in their garden.

The farm stand officially opens on July Fourth. The flowers and vegetables they had been growing in the greenhouse all winter go up for sale. Then, they start the corn, and shortly after, the tomatoes, which the community eagerly anticipates every year.

“As soon as the sign goes out, they come out of the woodwork,” Pete says of the local tomato lovers. “They risk their lives taking that left turn across Woodbury Road.”

After that, the family begins growing about 30 different vegetables, as well as a few types of fruit, including watermelon, cantaloupe and honeydew. Other fruit that is sold, such as apples and peaches, is brought in from the Hudson Valley. Having fruit orchards is a different type of farming, Pete explains. “It’s the total opposite of vegetables.”

Farmers on Long Island are dwindling in numbers. “We’re a dying breed,” Pete says. “It’s hard to get the younger generation to take over.”

Pete’s oldest son, also named Peter, at age 18, actually does have an interest in the business. His other children, Brittany, 19, and Nick, 16, are not as keen on the idea at this stage. “They want to go to college,” Pete says approvingly. “They can always come back. We’ll be here.”

Eighty hours is a normal workweek for Pete, sometimes 90. “In the wintertime, when it becomes 9 to 5 for a couple of weeks, I don’t know what to do with myself,” he jokes.

Pete clearly loves his job. Business is steady, repeat customers, of which there are many, start to feel like family after a while, and as does the whole community who count on him to help beautify their homes and fill their plates. He considers it a privilege to be one of the few farmers in the county and to be continuing the business hopefully for generations to come.