When the pandemic hit the giant existential pause button for the world back in March 2020, Joan Osborne was in the middle of mixing and mastering what would become her 10th studio album, Trouble and Strife, which was released in fall of that year. But because of raging pandemic numbers and a lack of live touring, the Brooklyn resident was forced to hunker down with her daughter. It was that down time that found Osborne straightening up her household and in the process, unearthing a treasure trove of live in-studio recordings that she might not have otherwise found. The end result was Radio Waves, a 13-song album of hand-picked numbers culled from 100-plus radio station appearances over a 25-year career that was released on her Womanly Hips Records imprint back in February.

For Osborne, it was a moment of kismet she might have otherwise overlooked during the pre-pandemic times.
“[During my extended stay at home], I did an awful lot of cleaning,” the Kentucky native shared. “That is how I discovered all this material I had in taped-up boxes that I had totally forgotten about which became the Radio Waves release. I found all of this stuff and normally, if I was in my busy pattern, I might have looked at it, taped the box up again, shoved it back in the closet and not given it a second thought. Because I had the time, I was able to listen through a lot of this stuff and give it the attention it deserved.” 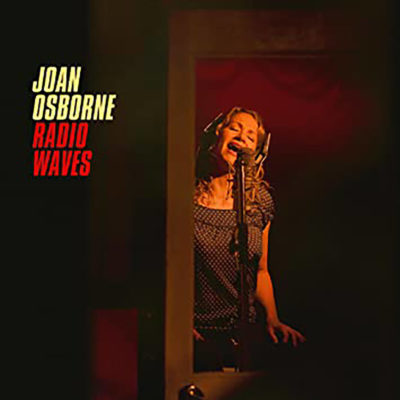 While Osborne admits she came across hundreds of performances and wanted to avoid “…doing some gigantic dump of all this material because it’s overwhelming for some people,” the baker’s dozen worth of cuts is a solid cross-section of covers and original material. The oldest performance is a 1995 reading of her “Saint Teresa” that Osborne did at KCRW while the most recent inclusion is a trio of 2012 gems, two of which find her delving into the canons of Bill Withers (“Same Love That Made Me Laugh”) and Dave Mason (“Only You and I Know”) recorded during a visit to the Sirius XM channel The Loft.
Other highlights include a stripped-down 2005 demo of the American Songbook standout “Dream a Little Dream” and a 2002 KROQ cover of the Sly & the Family Stone gem “Everybody Is a Star” featuring keyboardist Ivan Neville and Spin Doctors drummer Aaron Comess.

Throughout it all, Osborne’s warm and soulful phrasing fits hand-in-glove whether she’s tucking into a lesser-known Toshi Reagon tune (“Real Love”) or taking on a Stevie Wonder standard (“Love’s In Need of Love Today”). It all wound up being a rich experience for Osborne, as she balances going on college tours with her daughter and providing a stop-gap for fans while working on a new collection of original material.
“Most of my life’s work has disappeared without a trace,” she said. “I’ve made 10+ studio albums, but the vast majority of the songs I’ve sung hundreds and thousands of times over decades of touring across the globe, has never been recorded.”

And while she’s navigating the current landscape of touring shaped by shaky bookings dictated by fluctuating COVID-19 numbers, Osborne stopped long enough to share with Long Island Weekly the inspiration poetry provides for her own music and a handful of laureates who helped shape her craft.

Walt Whitman
(May 31, 1819 to March 26, 1892)
“He was really able to synthesize this sense of the world as a sacred place and of human beings being a part of this sacred place. I think he lived in a time when people thought of the sacred or religious as something outside of and above humanity and that [the sacred or religious was something] humanity needed to strive to be like. But he really had this sense that we are part of nature and part of the natural world. We’re part of this spiritual entity that is part of the whole world and the whole universe. That’s a Buddhist concept, but he was writing at a time when people were not really thinking like that. [I love] that and his mastery of language and ability to transport you to these places and give you this sense of walking down the street and [feel like] you’re part of this thriving beauty of humanity itself. That would be why I love him so much.”

Edna St. Vincent Millay
(February 22, 1892 to October 19, 1950)
“I think there is just this delicacy of language that she has—seizing these very delicate moments that would otherwise just pass you or other people by and be ignored. She has a way to really capture them. e.e. Cummings is another one that’s brilliant at that.
Just understanding these delicate, beautiful moments that would fly past you, but both these poets have a way of capturing them.”

Alan Ginsberg
(June 3, 1926 to April 5, 1997)
“I love the Beats and Alan Ginsberg. I think you can critique them as being in love with their own sort of vision of this gritty, urban existence and they really elevated it in a way that was super romantic, which I think is true. But I think they were also able to see in these sort of lower places what was beautiful and vibrant about that. I appreciate Alan Ginsberg as a poet.”

Joan Osborne will be appearing with Amy Helm on April 30 at the Patchogue Theatre for the Performing Arts, 71 East Main St., Patchogue. For more information, visit www.patchoguetheatre.com or call 631-207-1313.