The pandemic has had a dramatic impact on all sorts of printed media.
Read more
TOP STORIES

This high praise coming from the Piano Man regarding his fellow Songwriters Hall of Fame inductee doesn’t come lightly. Among Jimmy Webb’s many accomplishments are his being the only artist to win Grammy Awards in music, lyrics and orchestration. And while his name may not be instantaneously recognizable, his songs are—”Up, Up and Away,” “MacArthur Park,” “By the Time I Get to Phoenix,” “Galveston,” “Wichita Lineman” and “Didn’t We.” With the success of these compositions having come at a time when Webb was in his late teens and early twenties in the mid to late-1960s, it’s no surprise that the now-70-year-old singer-songwriter has just released his memoir of those times entitled The Cake and The Rain (St. Martin’s Press). Having already penned a book on songcraft (1998’s Tunesmith: Inside the Art of Songwriting), the Oklahoma native felt it was time to share stories he’d been jotting down over time.

“I’ve always logged these stories mentally, thinking that they might be something I might want to tell some time. In examining my memory, I realized that my story intersected some of the important events that happened in the 1960s in a very definite and almost spooky way. I thought this might be a thread that would make a book,” he explained. “This was a chance for me to break out of the three-minute song capsule that songwriters live in. Writing songs is really the art of miniaturization. All of a sudden, it was the idea that it would be a lot of fun to kick those fences down and write creatively about my own life. I have a couple of stories here that are worth telling and once I made the decision that it was possible to write a memoir, it was inevitable that I would do it.” 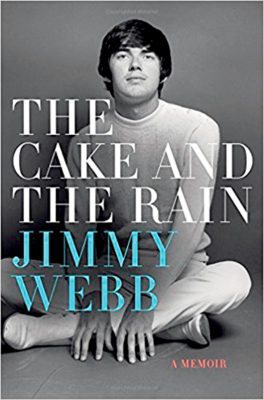 Webb took an interesting approach by starting out in 1969 and then jumping back to his parents’ pre-War years before he was born, and then juxtaposing chapter portions and jumping back and forth between eras before having the narrative end in 1973. Along the way, he shared fascinating stories about encounters and relationships, both professional and personal, he had with Louis Armstrong, Elvis Presley, Frank Sinatra, Glen Campbell and each of the Beatles.

Along the way, Webb also was either witness to or had a connection to numerous cultural events—the Monterey Pop Festival, the Tate murders and John Lennon’s infamous lost weekend. Throughout the book, Webb is unafraid of going down a warts-and-all path, not only with those he writes about, but with himself. He willingly admits falling short in coming through with a song requested by Paul McCartney for Mary Hopkin, a singer he was producing. Or forgetting to show up for an Art Garfunkel session where Webb was supposed to provide charts for an orchestra. This honesty was important for Webb to maintain if he was going to pen a memoir.

“If you’re going tell the nasty truth about somebody else, you really must tell the tale on yourself first. And I know that I did it to the best of my ability. I leaned way over backwards to punch myself in the mouth when I felt I needed punishment in the book and I certainly let the reader know that,” he said. “There were many mistakes made and I think that is really the essence of any life. I realized that by and large, there is a kind of unilateral sympathy with that because most people feel the same way about their lives. With the possible exception of Donald Trump, most of us feel like we’ve made a few mistakes. I look back on it all and it’s definitely been cleansing and it made me appreciate the life that I have and the life that I have left to live.”

While Webb’s next birthday won’t be coming around until Aug. 15, his wife, Laura Savini, helped pull together A Celebration of the Music of Jimmy Webb: The Cake and the Rain, a May 3 benefit that will be held at Carnegie Hall. With longtime friends Michael Douglas and Catherine Zeta-Jones servings as hosts, musical guests will include Judy Collins, Garfunkel, Toby Keith, Graham Nash, Marilyn McCoo and Billy Davis of the Fifth Dimension, Dwight Yoakam, Johnny Rivers, Ashley Campbell (daughter of Glen) and other guests to be announced. Concert proceeds will be donated to the Alzheimer’s Association and the I’ll Be Me Foundation in honor of Webb’s friend Campbell, who is in the final stages of the disease. It’s a cause that’s dear to the septuagenarian singer-songwriter’s heart and gibes with so much of what he wrote about in a memoir that he admits was very liberating to write.

“The net proceeds will go to the Alzheimer’s Association for Research and the I’ll Be Me Foundation, which concentrates their philanthropy on the caregivers, which is really where the burden falls in the Alzheimer’s equation,” Webb said. “There’s a wonderful group of people who have volunteered to come in and it’s an ersatz celebration of my seventieth birthday with people that I’ve worked with in the studio. What started out as a tribute to me has turned out to be a celebration of music and music-makers. In a way, it’s cohesive with my book because a lot of these artists and a lot of these songs are laid out in detail in the book, which wound up being great therapy.”

Jimmy Webb and guests will appear on May 3 as part of City Winery presents A Celebration of the Music of Jimmy Webb at Carnegie Hall, 881 Seventh Ave., NYC. Visit www.musicof.org for more information and to purchase tickets.