It’s All In The Hips

Much like the history and food of any heritage, music plays an enormously large role in Hispanic culture. Shows like Dancing With The Stars have educated audiences all over about the different styles of ballroom and Latin dances and how different, yet similar they are in musicality and form. While ballroom is about elegance, grace and perfect posture, Latin dances are about passion, fire and fun music to fuel each move from the toes to the hips and all the way up to the shoulders.

Read our basic history of Latin dances and see which class you’d enjoy taking for yourself at your local dance studio.

Also called the Cha Cha Cha, this Cuban-born dance is all about quick feet. A set of three steps moving rapidly backward and forward gives the dance its name since many dancers count out the steps as “cha cha cha.”

A dance of romance, the Rumba has roots in Cuba and consists of two quick steps and a third, slower step that takes two beats to execute. Dancers use a box-like pattern to guide their movements and use slow, romantic steps with a focus on hip movements when it comes to choreography.

Heading over to the islands, the Salsa originated in the Caribbean, even though it has a strong African influence. A fun and lively dance for couples, the Salsa centers on a four-beat combination of two quick steps and a slow step with a pause or tap.

Brazilian in origin and executed in many different forms, the Samba is one of the most well-known Latin dances, especially for its role during Carnival. While individual dancers can dress in colorful costumes and perform, the dance is also for couples.

It takes two to tango. A dance of seduction born in Buenos Aires, this dance requires surgical precision when it comes to footwork, so a lot of practice is required. The Tango has been described as both irresistible and racy when it comes to choreography, adjectives that have mirrored the time in Argentina years ago. A dance that expresses grief, passion, national pride and celebration defines the Tango.

As for the Argentine Tango, a striking difference between that and ballroom tango is in the shape and feel of the embrace between the two dancers. Ballroom technique dictates that partners arch their upper bodies away from each other, while maintaining contact at the hip while the tango relies on stylized sensual moves, staccato foot steps, flexed knees and a highly focused connection between partners. 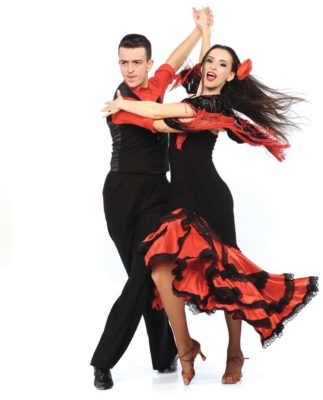 It began in Andalusia, Spain as a professionalized art-form based on the various folkloric music traditions of the southern part of the country. Flamenco is comprised of four elements: cante (voice), baile (dance), toque (guitar) and the Jaleo, which roughly translated means “hell raising.” The dance involves hand-clapping, foot stomping, shouts of encouragement and is enjoyed by spectators who often watch a couple perform in elaborate clothes, especially the woman, who can often be seen wearing an impressive ruffled, floor length gown.

The Mambo also originated in Cuba. Its signature move is a three-beat step moving forward and then backward while shifting weight from one foot to the other. One member of a dancing pair performs the backward motion while the other moves forward. What really gives the Mambo its style, though, is the hip-swaying action the weight shift creates.

As the official dance of the Dominican Republic, the Merengue is easy to learn, making it a great choice for those looking to embark on a journey through Latin dancing. Movement goes to the front, back and side when a couple dances together. 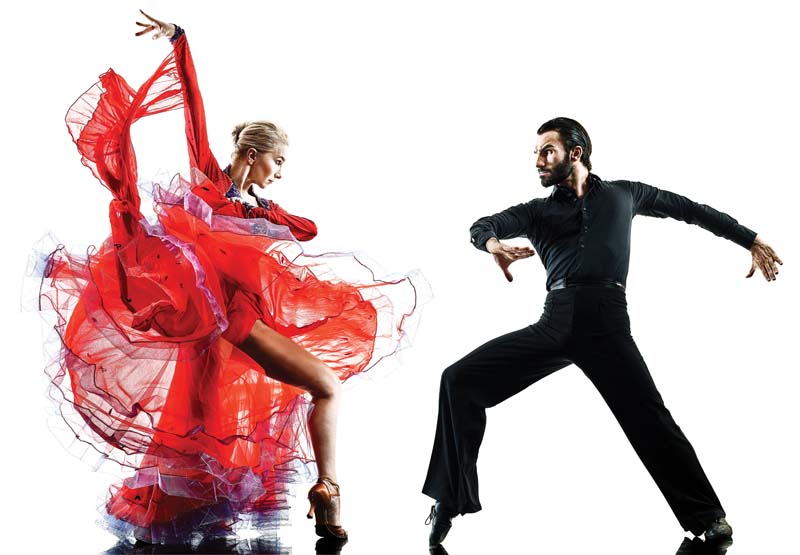 This dance translates to “double step” in Spanish. While a version of the Paso Doble originated in Spain, it was the French who turned the moves into a couples dance, later influencing the Spanish. A dance of complex and challenging choreography with a story line of conquest between the matador and the cape, the male partner assumes the role of the matador in a bullfight, while the female dancer functions as his cape and his adversary. An intense number danced with fierce passion, exaggerated style costumes and a theatrical quality, the Paso Doble is always an emotional experience to dance and watch.