Inside The Longines Masters Of New York

Next week, April 26-29, NYCB Live, Home of the Nassau Veterans Memorial Coliseum will be the setting of the debut Longines Masters of New York. Bringing indoor show jumping to Long Island for the first time ever, the Longines Masters of New York is the must-attend spring attraction, offering something for the entire family. Attracting the world’s top-ranked show jumpers, the four-day event will bring unparalleled sport, combined with unrivaled luxury lifestyle, with one-of-a-kind artwork, shopping, musical performances, Instagram-worthy cuisine and much more.

But for those who aren’t familiar with the Longines Masters Series, how did it all begin and how did it comes to New York?

More than 10 years ago, Christophe Ameeuw and his team at EEM set out to bring show jumping to an international stage with the creation of the Gucci Paris Masters. In 2015, EEM introduced the first intercontinental trilogy, which we now know as the Longines Masters Series, “Grand Slam Indoor of Show Jumping.” This year marks yet another milestone for the series as we welcome the competition to New York for its final leg. The ultimate in luxury and culture, New York is the ideal new setting for the American leg of the grand slam of the Longines Masters Series.

Taking place at the newly-renovated NYCB LIVE, the Longines Masters of New York will be the first prestigious indoor equestrian competition in Long Island, appealing to fans and riders throughout the East Coast, Canada and Mexico. New York horse enthusiasts of all ages have been eagerly awaiting an indoor stadium show jumping event as iconic as past National Horse Shows at Madison Square Garden. For the new generation of equestrians, this will be the first time seeing a show jumping competition in an indoor arena in New York.

The coliseum has housed some of the most legendary events and amazing accomplishments. It is home to the ice rink where the legendary New York Islanders brought home four Stanley Cup trophies and the stage where Billy Joel performed 32 times to sold-out crowds. Clearly, under these lights, this is where champions compete and legends rise, and so it is a natural fit as the new home for the Longines Masters of New York.

Over the years the Longines Masters Series has welcomed some of the biggest names in sports, Hollywood, business, and more. From the competition ring to the VIP area, you never know who you will spot. Some notable past attendees and participants have included Jessica Springsteen and her parents Bruce Springsteen and Patti Scialfa, Georgina Bloomberg, Hannah Selleck, Eve Jobs, Jennifer Gates and father Bill Gates, Kaley Cuoco, Iggy Azalea, Denise Richards, Selma Blair, Guillaume Canet and many more.

Dazzling spectators in three of the most iconic cultural hubs in the world—Paris, Hong Kong, and now New York—the Longines Masters Series mirrors the art, music, and gastronomic creativity of these cities. Feel your heart pound as you witness four days of the best riding in classes such as the one-of-a-kind Longines Speed Challenge and the Longines Grand Prix. At the Longines Masters of New York, be sure to visit the Prestige Village to indulge in luxury of all kinds and have a sneak peak of the riders as they warm up for the ring. 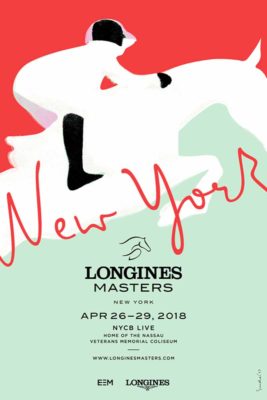 New Yorkers will have an additional element of excitement for the event as they cheer for New York’s strong group of local riders. Show jumping legends like McLain Ward, Georgina Bloomberg, Brianne Goutal and more will have the unique opportunity to showcase their talent in the city they love and call home.