What a difference a pandemic makes. Even though the world is two years-plus removed from COVID-19 throwing the world into a lockdown, music lovers are still enjoying the fruits of forced solitude. For Goo Goo Dolls fans, it’s in the shape of Chaos in Bloom, the band’s recently released 13th studio album. Recorded in Dreamland Studios, a remote space in Woodstock, NY, this collection of songs also marks the production debut of vocalist/guitarist John Rzeznik, who founded the band along with Robby Takac and George Tutuska in Buffalo back in 1986.

For Rzeznik, it was a chance to play live in the studio, an approach the band had last taken on its 1995 breakthrough album A Boy Named Goo.
“It was like sort of going to camp,” Rzeznik responded when asked about recording in this manner. “I wanted to get everyone away from the distractions. I love making albums in Los Angeles and New York because it’s exciting, fun and they have everything that you need. And the greatest studios in the country are all in Los Angeles. That’s normally what we do. And we did some of the overdubs and the final stuff out in L.A., New York and all over the place. But the main body of the album was recorded out in the woods in an old church. I wanted to do a lot of it live, because I just think there’s a different feel to it. It’s not all chopped up to the grid and put together in that fashion. That was an observation that I had made from watching live YouTube videos of us. The live show is a lot greasier and tougher. I thought that we should try and bring this into the studio. So it was fun in that way, because you’re actually getting to feel how Robby [Takac] and the drummer were playing together or how the three of us were playing together. It’s tight, but it still has a looser vibe to it.” 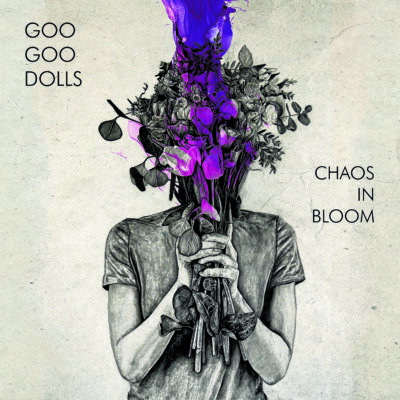 While the band’s downtime yielded Chaos in Bloom, along with 2020’s It’s Christmas All Over and last year’s EP 21, Rzeznik felt it was the logical response to psychologically responding to the world grinding to a stop in the early days of the pandemic.
“It was really difficult because I really felt like I had lost my purpose,” Rzeznik shared. “I’ve been doing this since I was 20. It’s the only real adult job that I had. Until the band had a hit, I was working in a bar, doing those kinds of things. But this is what I was really, really good at. And this is what gave my life meaning and purpose. It was difficult not getting paid for a couple of years. But, it’s pretty amazing to me how much purpose work gives your life. It made me slip back and think a little bit about me needing to maybe find something else that might give my life purpose. My family does—my daughter does. But there are other things in life.”

Having started out in the mid-’80s, the Goo Goo Dolls operated in the college radio world at a time when bands from that scene hopped in the van, played clubs around the country and regularly dropped into regional radio stations to promote their latest release. At the time, the trio was calling distinctly non-alt-rock label Metal Blade home at the time and barely scraping by. That all changed when the Goos blew up via the 1995 smash single “Name,” which was a Billboard Hot 100 Top 5 hit. It was a seismic career shift for the band which Rzeznik remembers having mixed feelings about at the time.
“[We blew up when] KROQ out in Los Angeles started playing the song,” he recalled. “At the time, they were sort of the taste-makers for the rest of the country. They started spinning the song and then it just caught on. In a way, there was this strange guilt that came with it. I guess they call it impostor syndrome because we’d grown up in this very underground, do-it-yourself scene and we never expected to do anything more than open for Soul Asylum and for The Replacements. And then boom—this thing just happened and it was crazy. But our manager said to just keep our heads down and keep working. To be honest with you, I think we worked harder than any other band or our ilk at that time. We just kept going for it and going for it and going for it.”

Currently on the road with a new batch of songs and plenty of hits to play, Rzeznik and company are happy to be out of the house playing to fans. He was also happy to share some of his favorite singers with Long Island Weekly.

Bruce Springsteen
(September 23, 1949 to present)
“I think it’s the unaffected nature of his vocals. I think Mr. Springsteen sings like Mr. Springsteen. You can hear him imitating Bob Dylan in the old stuff, but we all started to imitate somebody.”

Rod Stewart
(January 10, 1945 to present)
“Unbelievable. Who the hell sings like that?”

Adele
(May 5, 1988 to present)
“I think her voice is not an affectation. I believe that when she sings, it resonates so deeply inside of me that I’m just like, ‘Wow.’”

Aretha Franklin
(March 25, 1942 to August 16, 2018)
“My God. Once again—it’s just when somebody opens their mouth and you know it’s something they’re born with and it’s some force that’s moving through them. That’s coming from somewhere else, it’s moving through you and it’s not yours. You’re channeling something and it’s when I feel the honesty in someone’s voice.”

Robert Smith
(April 21, 1959-present)
“Do you know who I love because I can’t sing any way like this? I’ve been smoking for 25 years so I can sound like Robert Smith. His phrasing is so interesting and his voice is so odd to me, but it’s so unique. It’s just beautiful and it just works.”