New York State Senator Kirsten Gillibrand has officially tossed her hat in the ring for the 2020 presidential election. She announced her intentions on the Jan. 15 episode of The Late Show with Stephen Colbert. Gillibrand is running on a platform focused on motherhood and family-centric issues.

“I’m going to run for president of the United States because as a young mom, I’m going to fight for other people’s kids as hard as I would fight for my own,” Gillibrand said on the Late Show and repeated the sentiment at the Jan. 16 news conference she held in her hometown of Troy, NY, where she lives with her husband, Jonathan, and their two sons, ages 15 and 10.

The economic issues facing families has been part of her legislative agenda since she assumed office in 2009, including introducing legislation for expanded pre-K access, reduced childcare costs, sponsoring the Family and Medical Insurance Leave (FAMILY) Act and supporting equal pay for equal work. 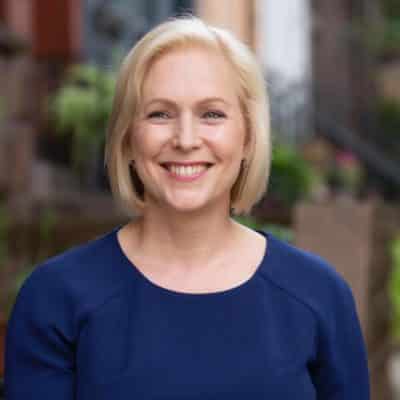 “Health care should be a right and not a privilege,” Gillibrand told Colbert.

As a member of the Senate Armed Services Committee, she has worked with others in the senate to improve access to benefits for active military members, veterans and their families.

Gillibrand joins about 30 other Democrats who have indicated plans to join the 2020 primary race, an unprecedented number at this stage. Like several others in the crowded field, she has shunned corporate PAC (political action committee) money.

In a tweet, Gillibrand said, “We’ve gotten grassroots donations to our exploratory committee from all 50 states! This campaign is going to be run for and by people, not corporate PACs—that’s how we live by our values.”