In the present political climate, she was asked, might not there be resistance to what opponents invariably call “nanny state” and costly government policies?

“Those people are stuck in the past,” the junior senator from New York told Anton Media Group. “They don’t understand that the average student is a single mom and if she’s going to earn to her full economic potential, she needs things like affordable day care and access to paid leave. That’s why I focus on such issues, because these are economic engines that can transform the middle class. I hope more people earn their way into their middle class and help our economy thrive.”

It would provide $9 billion over five years to fund programs providing free child care services for up to 500,000 children of low-income parents attending community colleges and minority-serving institutions. Among other aims, it would “increase the child care workforce by supporting early childhood education programs at these institutions to create a pipeline of infant and toddler care providers in the community.”

In New York State colleges, nearly 200,000 undergraduates are parents, and almost half are single mothers.

A press release stated that the act “comes after a report revealed that one-in-five college students are raising a child under the age of 5 while in school, and that many of these parents have trouble finding affordable and high-quality child care.”

One of those single mothers at Gillibrand’s press conference was Natasha Law of Valley Stream, a nursing student at NCC. She spoke as Gillibrand asked Law’s daughter Hunter, 4, to stand beside her. Hunter is enrolled at the day care center.

“I am a testament to parents and students out there who think they can’t pursue education and can’t invest in their future because of childcare costs,” Law said. “If not for the Greenhouse, I would not be able to do it. I found myself in a place where I had to choose between furthering my education and finding great childcare for my daughter and the Greenhouse allowed me that opportunity where I didn’t have to choose. They give her the best care and they give me the peace of mind that I could go to school right here on campus and drop my daughter off and she’s okay. I’m very thankful to Senator Gillibrand and I think this is amazing and a great opportunity that we have here.

“For 40 years, [the] Greenhouse has provided cost-effective child care services for students and the PROSPECT Act will assure that more college students will have greater access to affordable and high-quality daycare, alleviating the financial pressure of paying for childcare and allowing our students to focus on their academic success,” Williams said in a statement.

As he introduced Gillibrand, Williams said, “New York is a high-needs state for child care,” and went on to cite a recent study that 775 students at NCC were identified as single parents, and 90 percent of those students were eligible for Pell Grants, a federal grant for low-income students. In addition, one-quarter of NCC students were 25 or older, and 51 percent of those working are putting in 21 or more hours on the job.

Williams called Gillibrand “a stalwart for the economic empowerment of women and working families as she fights to make quality child care affordable.”

Gillibrand stated that the high cost of living on Long Island exacerbated the burdens on students with young children. In a press release, the Child Care Council of Nassau, Inc., estimated that the average, annual cost of child care for infants and toddlers in Nassau County is $15,936 and $13,884, respectively.

“The Children’s Greenhouse currently serves around 140 children, with 70 percent being children of student parents. The wait time for enrollment is approximately three months,” stated the release.

“Student parents are pursuing degrees that will provide the credentials they need to provide for their children,” Gillibrand said. “They shouldn’t have to choose between getting a college degree or providing for child care.”

The PROSPECT Act, she pointed out, “invests in our country’s future and ensures that every family will succeed.”

New York State Senator Kevin Thomas said, “At a time when college costs are skyrocketing, we simply cannot stay on the sidelines as it gets even harder for student parents to afford a higher education. We have to act. The PROSPECT Act is a step in the right direction. This is a critical investment in the future of our communities.”

Janet Walsh, director of the Greenhouse, told Anton Media Group that students pay a separate child care fee and eligible students can be subsidized through grants. 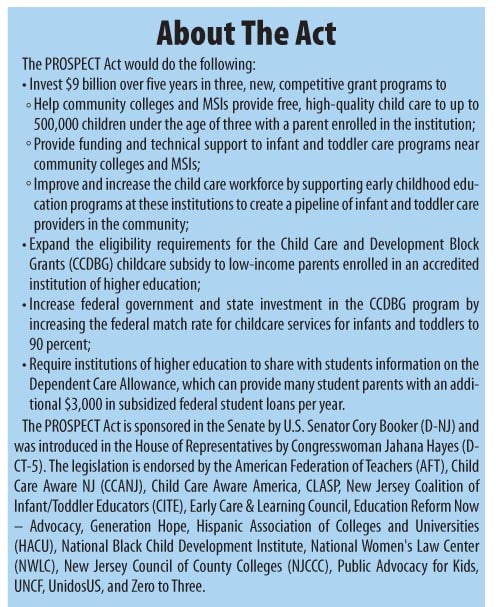 She went on to say, “If we had additional rooms, we could take in more families. Space is a big concern and so our finances. What the senator is proposing is a monumental benefit for students and parents. If you’re a young student and parent and coming back to school, you don’t have a lot of excess income. Even the most affordable child care is expensive. So this is a great bill.”

Gillibrand acknowledged to Anton Media Group that the proposed bill would be easier to pass if the Democrats flipped the Senate this fall—and recaptured the White House.

If that were to happen, she said, “We will have a much more robust government that cares about these social safety nets.”

In an interview, Gillibrand dismissed those who would oppose the act.