Getting To Know Sauvignon Blanc 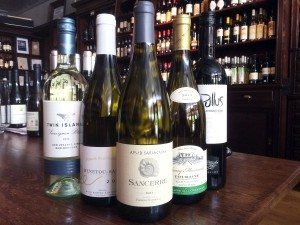 Sauvignon blanc is enjoying great popularity, perhaps even replacing chardonnay, as the “go to” glass of white wine for many consumers. Originally French, it’s become truly international and is grown in most every wine-producing country. Let’s get to know a little about the grape.
The first thing you’ll notice about sauvignon blanc is that it’s very aromatic with an exuberant citrus character, notably grapefruit, with other aromas described as grassy, green herbs and sometimes an assertive smell reminiscent of a boxwood shrub (more on that later).

Sauvignon blanc is a wine that’s not creamy or buttery, as it rarely sees oak barrels. The wines are fruity and forward and it helps to see the wine in this light, paying attention to the wine’s fresh acidity; the finish is dry. Another thing to know is that the grape retains its identity very strongly, even if it’s in a blend, so for wines such as Bordeaux blanc or for some Long Island wines, you’ll be able to identify its presence.

Some of the best examples of sauvignon blanc come from the well-known French appellation of Sancerre, and while there are many good examples to choose from, don’t miss out on wines from Sancerre’s neighbors like Pouilly-Fumé and Menetou-Salon. Further down the Loire River Valley, the general area is known as the Touraine and a well-made bottle labeled “Touraine sauvignon” will cost less money and is typically a good value.

The other major player on the world stage is New Zealand. Sauvignon blanc from the Marlborough region is a great success story and widely appreciated. The wines here are a little rounder, with more tropical flavors leaning toward pink grapefruit. If the French style is a little sharp and bright for you, then New Zealand is a good alternative.

Looking elsewhere on the globe, you’ll find nice wines from many places, such as California, Chile and the cooler areas of central Europe, like northern Italy, Slovenia and Austria. One particular standout region is right here on Long Island, as several of the wineries produce delicious wines, so it’s definitely worth hitting a few tasting rooms next time you are out east.

One issue with sauvignon blanc, as I mentioned earlier, is the assertive nature of the flavors, particularly the boxwood or “catty” aromas found in some. In contrast to most other wines, where intensity is ramped up and flavors tend to be bigger as you get into more expensive bottles, the finer versions of sauvignon blanc will have the grassiness and exuberant fruit under control. You’ll find more finesse and a balance of the more nuanced flavors in finer bottles, especially an earthy, flinty, mineral quality in the better wines from Sancerre.

While sauvignon blanc offers great drinking refreshment on it’s own, its also a worthwhile partner at the table. Classic food pairings include fish dishes, especially sole, flounder or fluke in a buerre blanc or paired with fresh goat cheese. I also like it with the some Mexican foods, like enchiladas verdes and fish tacos, or whenever a bright citrus flavor is involved in a dish, such as grilled chicken thighs with lemon and thyme.
There’s a lot to explore with sauvignon blanc, so “Enjoy!”

Michael Amendola is wine director at The Village Wine Merchant in Sea Cliff. Learn more about wines at www.villagewinemerchant.com.