Getting Back With Sir Paul

These are some of the descriptors used when referencing The Beatles and continue to be reserved for surviving founding members Paul McCartney and Ringo Starr. McCartney’s creative spirit in particular has never flagged. He’s made that readily clear on the current One on One Tour, which hit all the area’s major venues (Madison Square Garden, Barclays Center, Prudential Center) including two dates at NYCB Live at Nassau Coliseum.

Furthermore, the energy, quality and duration of Macca’s performances, which clock in at a herculean three-hour length with nary an intermission, are all the more impressive. Even more so given that McCartney celebrated his 75th birthday in June.

The Rock and Roll Hall of Famer dug deep into a canon that includes material he performed with The Beatles, Wings and as a solo act. The set was fueled by a group of back-up musicians whose chops and chemistry had them effortlessly changing creative gears throughout the evening. Given that this kind of musical dexterity oftentimes comes from the top down, Sir Paul himself switched off between numerous instruments including bass, electric and acoustic guitar, piano, organ and ukulele—all while singing and serving as a raconteur master of ceremonies.

Opening with “A Hard Day’s Night,” McCartney regaled the all-ages crowd with a set list dating back to his first group The Quarrymen (the Buddy Holly-flavored “In Spite of All the Danger”) up through 2015’s anthemic “FourFiveSeconds,” a Rihanna/Kanye West collaboration. As impressive as it was for McCartney to trot out warhorses like “Can’t Buy Me Love,” “Love Me Do” and “And I Love Her,” songs that were recorded when The Beatles were on the concert circuit, it was equally intriguing to hear him perform gems like “Hey Jude,” “Being For the Benefit of Mr. Kite” and “Eleanor Rigby,” all originally cut during the Fab Four’s post-touring phase. 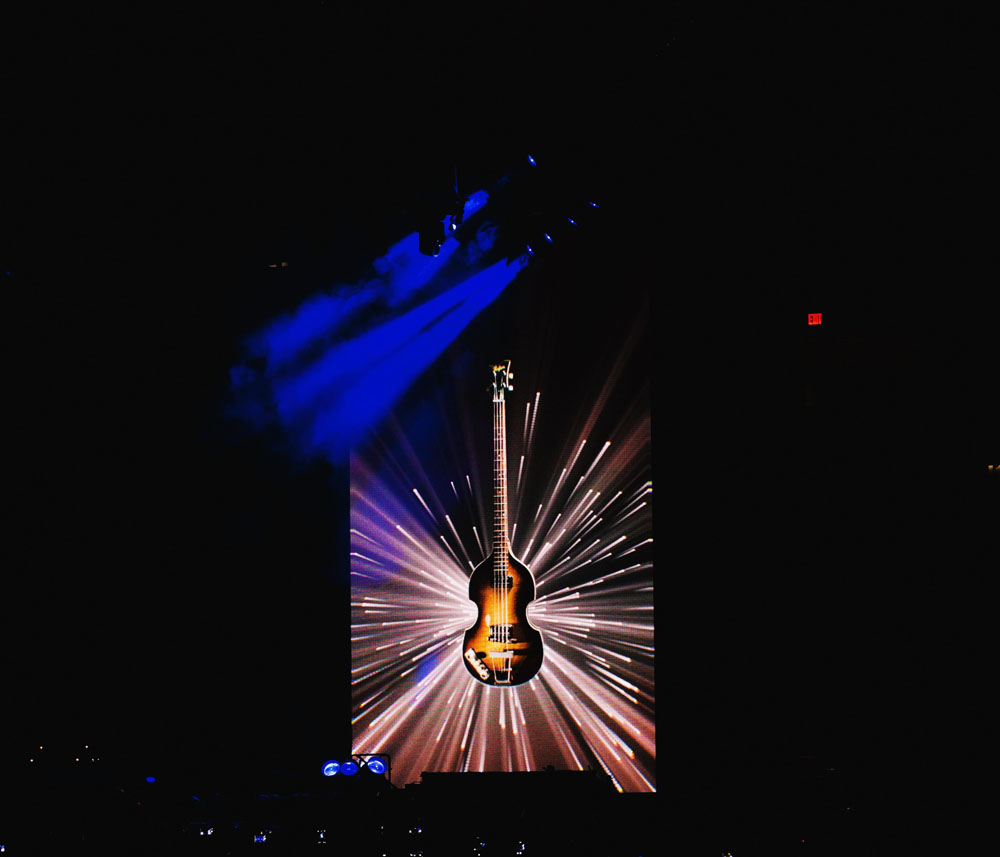 Though Billy Joel didn’t show up for a second consecutive night as one of the many celebrities who have been popping up at different stops along the tour, longtime McCartney creative director LeRoy Bennett’s wondrous stage presentation more than made up for that.

The over-the-top explosions and flames kicking up during “Live and Let Die” and the video and animated renderings of Sgt. Pepper’s Lonely Heart Club Band sprinkled throughout the set would be mere window dressing were it not for McCartney’s genial interaction with the crowd. Coming off like that favorite uncle (who just happens to have a wealth of pop manna to play in his back pocket), the Liverpudlian’s anecdotes were an integral part of the show. He spoke of first seeing Jimi Hendrix make his UK debut at the London club The Bag O’Nails and explained how “Blackbird” was actually an homage to those fighting for equality during the Civil Rights Movement.

By evening’s end, the knighted septuagenarian had ripped through a 40-song set that featured a seven-song encore that included an Abbey Road finale of “Golden Slumbers,” “Carry That Weight” and “The End.”

With this kind of substantial live music experience, the application of living legend in reference to Paul McCartney continues to be a major understatement.