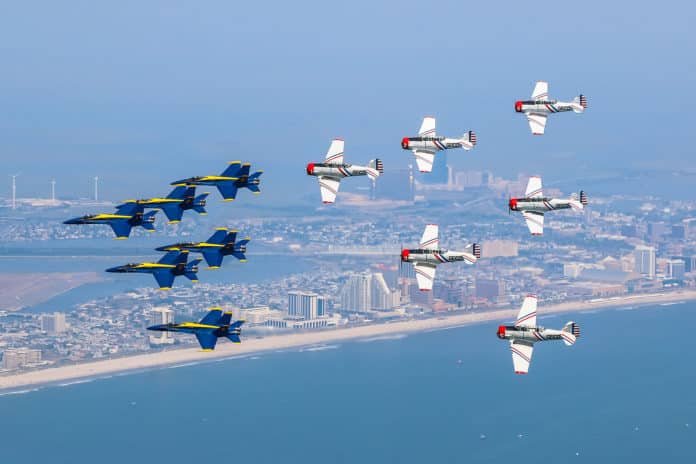 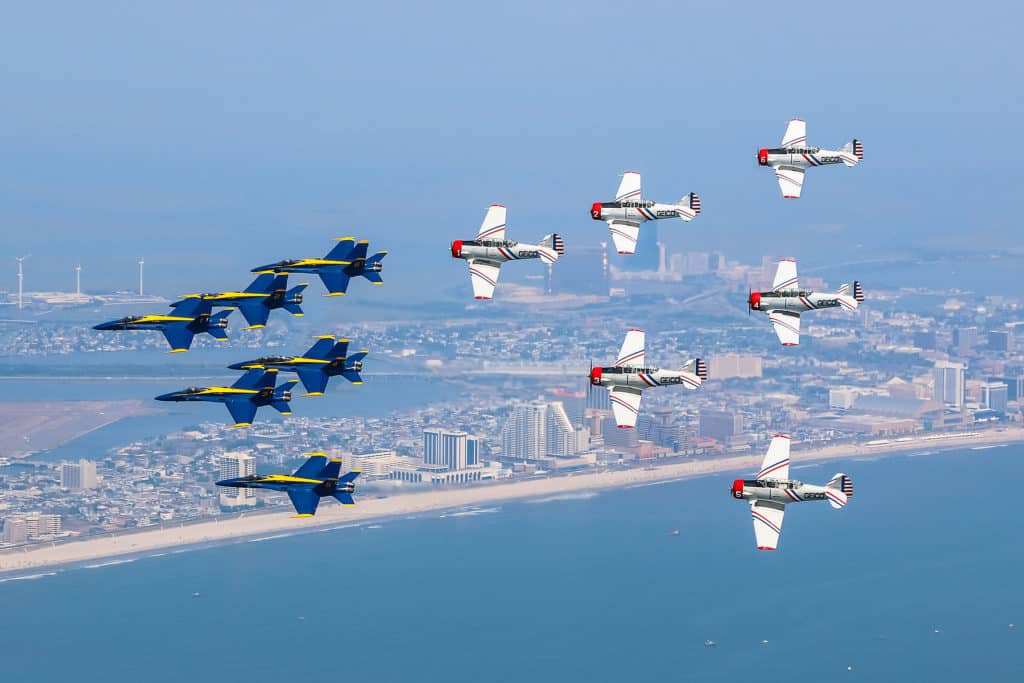 The GEICO Skytypers Air Show Team returns for their 15th appearance at their hometown air show at Jones Beach. The team has prepared a new demonstration that will be performed during Bethpage Air Show at Jones Beach on May 26-27. The 15th annual event will be hosted at Jones Beach State Park, which is one of the largest events for the New York State Parks Department. The homecoming show will be the sixth stop for the 2018 air show season for the squadron of World War II-era aircraft.

The GEICO Skytypers fly six SNJs powered by 600-horsepower Pratt and Whitney engines. As WWII training aircraft, the SNJs were designed to perform all the maneuvers of fighter planes from the same era, but at slower speeds.

“The SNJs flown by our team were originally used as training aircraft for WWII pilots,” said Long Island resident and Team Flight Lead Larry Arken. “We consider it an honor to demonstrate the amazing abilities of these vintage warbirds on behalf of our sponsor, GEICO, while sharing some rarely seen aviation history with air show crowds. Now more than 75 years old, the SNJ-2 is a testament to the engineering genius of the Greatest Generation. These aircraft are a dream to fly.”

A majority of the team’s low-level flying demonstration takes place in front of the crowd. The historic roar of the vintage engines fills the air as the team demonstrates more than 20 different period-specific tactical maneuvers during its 18-minute performance.

“We are excited to reveal a new routine to our supporters for the 2018 Air Show Season,” said Lead Solo Pilot Steve Salmirs, who choreographed the Skytypers’ new demonstration for the 2018 season. “There is more dynamic maneuvering from the various aircraft, additional interaction between the planes in the air show air space, and some surprise elements developed to enhance and highlight the aircraft and pilots’ capabilities.”

Salmirs added, “Our narration will continue to educate audiences as the team demonstrates military maneuvers taught and executed from WWII to present day. We look forward to seeing old friends and making new acquaintances at air shows to hear comments about the new routine. We hope everyone will be pleased.”

The GEICO-sponsored team is known as the “Skytypers” because of its unique capability of creating giant messages in the sky when not performing in air shows. Flying five aircraft in a tight, line-abreast formation, the planes coordinate in typing dot matrix-style messages with environmentally friendly puffs of white smoke. A computer in the lead aircraft uses a custom-programmed tablet to send commands to the other planes via radio signals. The result is astonishing individual letters as tall as the Empire State Building generating messages that can be seen from 15 miles away in any direction with 20-25 characters typed in less than two minutes.

The event is free and open to the public. There will be a $10 Vehicle Use Fee. For more information on the air show, visit bethpageairshow.com.