It’s that time of year again when time in the kitchen is all about warming hearts and bellies with hearty fall dishes. Fortunately, our favorite chefs are always at the ready with delicious recipes that are perfect for the season.

Celebrity chef, TV personality, restaurateur and cookbook author, Donatella Arpaia, who is best known for her role as head judge on Food Network’s Iron Chef America and the Next Iron Chef and owner of the upscale quick service pizza concept, Prova Pizzabar, shares her recipe for a Galbani Harvest pie and oven baked French toast with a cranberry compote.
Geoffrey Zakarian’s career spans 30 years as a chef restaurateur known for his sophisticated taste and signature style. Owner of several restaurants, including Point Royal at The Diplomat Beach Resort in Hollywood, FL, Zakarian offered up his sweet brown sugar pie.

As a Korean-American, French-trained chef based in London and New York, Judy Joo’s culinary expertise spans the globe, specializing in pastry and Korean cuisine. She shares her favorite childhood recipe of salted caramel pancakes, also known as Hotteok.

And it wouldn’t be soup season without Worst Cooks In America star, chef and cookbook author Anne Burrell’s pumpkin soup and sweet potato and apple hash. 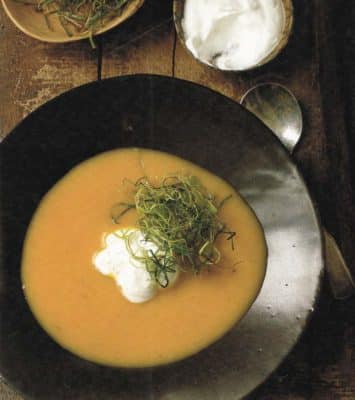 “I love this soup because it’s my favorite color and the garnishes bump up the fancy factor,” said Burrell. “It’s also totally seasonal—what could be more autumnal than a pretty pumpkin soup with spiced whipped cream and crispy leeks?”

1. Coat a large, deep pot with olive oil; add the leeks, carrots, celery and garlic; and bring to medium-high heat. Season with salt and sweat the veggies until they start to soften and are very aromatic, 8 to 10 minutes. Add the pumpkin and potato and sprinkle with salt. Stir to coat the mixture with the oil and cook for another 5 to 6 minutes; add the wine and reduce by half.

2. Add the stock, thyme bundle and bay leaves. Squeeze the orange halves directly into the soup, then add both halves. Taste for seasoning and adjust if needed. Bring to a boil and reduce to a simmer; cook for 35 to 40 minutes.

3. Remove and discard the orange halves, thyme bundle and bay leaves and use an immersion blender or upright blender to purée the soup. If the consistency is too thick, add a bit of water. Taste and adjust the seasoning as needed.

4. For the leeks, heat an inch of oil in a small saucepan set over medium heat. While the oil heats, set up your drying situation next to the stove by putting a couple layers of paper towels on a baking sheet. When the oil is hot, working in batches, fry the leeks until crispy and brown, 2 to 4 minutes. Use a slotted spoon or fish spatula to remove the leeks and set them on the paper towels to drain; sprinkle with salt.

5. Using a hand or stand mixer, whip the cream and allspice until the cream holds its shape in soft peaks.

6. Ladle the soup into service bowls, top with a dollop of the whipped cream, and garnish with fried leeks.

1. Coat a large sauté pan with olive oil, add the bacon, and bring to medium heat.

2. When the bacon starts to get crispy and brown, 5 to 6 minutes, add the onion, rosemary and red pepper. Season with salt and sauté the onions until soft and aromatic, 8 to 10 minutes

3. Add the sweet potatoes, maple syrup, and chicken stock Cover and cook for 15 to 20 minutes, or until the potatoes are soft but not mushy. Remove the lid and let the liquid reduce by about half.

4. Add the scallion whites and apples and cook for 5 to 6 minutes, or until the apples are soft.

5. Stir in the scallion greens and pepitas, taste, and adjust the seasoning if needed. 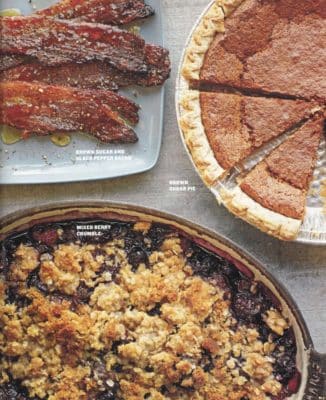 1. Preheat the oven to 350°F. In the bowl of an electric mixer fitted with the paddle attachment, combine the eggs, sugar, and half-and-half. Beat on medium speed until smooth, about 1 minute. Add the melted butter and vanilla and mix to combine. Sprinkle the flour over the top and mix just until smooth and no lumps remain.

2. Pour the filling into the pie shell and bake in the middle of the oven until the pie is just set and no longer wobbly in the center, about 40 minutes. (If the crust is getting too brown and the pie is still not set, cover the edges of the crust with foil.) Let cool on a wire rack.

3. Serve slightly warm or at room temperature. When plating, top each slice with a dollop of crème fraîche. 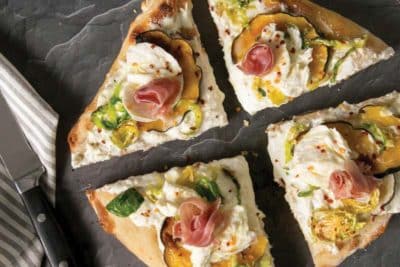 1. Sprinkle yeast over water, combining in a large bowl. Let stand until yeast is creamy, about 1 minute. Stir until yeast dissolves. In another large bowl, add sea salt, then yeast mixture and flour. Stir until a soft dough forms.

2. Transfer dough ball to a lightly floured surface and knead, adding more flour if necessary, until smooth and elastic, about 10 minutes.

3. Lightly coat another large bowl with oil. Place dough in bowl, turning it to oil the top. Cover with plastic wrap and store someplace warm. Let rise until it doubles in size, about 6 hours.

4. Cut dough into 9-ounce pieces and shape into balls. Place the balls on a nonstick surface or parchment paper, and then cover with plastic wrap, allowing room for dough to expand. Let dough rise until doubled, 8-12 hours.

5. Rest dough in refrigerator for 2-4 hours. Your homemade dough is now ready to be baked. Select 1 dough ball per personal pie. (Remaining dough balls can be made into more personal pies or frozen for later, if desired).

2. Place acorn squash and Brussels sprouts on a metal tray. Drizzle with olive oil and season with salt and pepper. Bake in oven for 10-15 minutes until lightly browned. 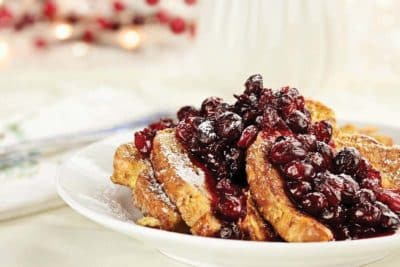 1. Pour it together and let it simmer until cranberries are soft and begin to burst about 7 minutes.

2. Grease the baking pan with butter. Cut brioche bread or Panettone in 1 inch slices and evenly distribute in the pan.

3. Crack the eggs in a big bowl. Whisk together the eggs, milk, cream, granulated sugar, brown sugar and vanilla and lemon.

4. Pour evenly over the bread. Cover the pan tightly and store in the fridge until needed (min I hour).

5. Preheat the oven to 350°F. Remove from fridge and sprinkle with cinnamon, nutmeg sugar and pieces of cut butter. Bake for 45 minutes for a softer, more bread pudding texture or for 1 hour or more for a firmer, crisper texture.

6. Top with cranberry compote and drizzle with warm maple syrup. 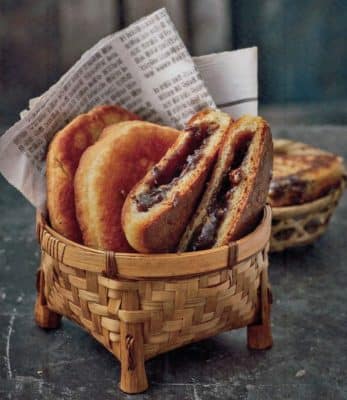 “Hotteok are sweet pancakes filled with a brown sugar syrup and nuts and these decadent treats were my sister Sonya’s choice dessert when we were kids,” said Joo. “In each bite, you crunch through a crispy golden crust, then through a chewy dough, and finally into a gooey center. I’ve jazzed up the classic recipe by substituting the brown sugar with muscovado sugar, which is richer and oozier when melted, and mixing it with a touch of salt.”

1. In a very small saucepan, heat the milk to about 105°F. Remove from the heat, add the sugar and yeast, and whisk until they have dissolved. Let stand in a warm place for 3 to 5 minutes, or until bubbling, to activate the yeast.

2. In a large bowl, combine the bread flour, rice flour, cornstarch and salt. Slowly stir in the warm milk mixture until a sticky dough forms. Shape the dough into a ball in the bottom of the bowl and cover the bowl with a clean damp kitchen towel. Let the dough rise in a warm place until doubled in size, l½ to 2 hours. Punch it down and let it rise until doubled in size again, about 1½ hours more.

1. Meanwhile, in a small bowl, mix together the muscovado sugar, peanuts, cinnamon and salt.

2. After the dough has risen a second time, dust a clean work surface with flour and turn the dough out onto it. Dust the top of the dough with some more flour and knead it a few times. Shape the dough into a fat, long log and cut the dough into ten equal pieces, shape each piece into a ball, set on the floured work surface, and cover with a clean kitchen towel or plastic wrap. Dusting with flour as needed to prevent sticking, press a dough ball into a 4-inch-wide disc using your fingertips. Make sure the disc is uniformly thick so the finished pancake will be evenly filled with caramel.

3. Put the disc in your hand and slightly cup it. Spoon 1½ to 2 tablespoons of the filling into the center of the disc. Seal the disc closed by wrapping the dough around the filling and pinching the edges together at the top. Once sealed, reshape gently to form a ball, set with the seam side down on the floured work surface, and cover with a clean kitchen towel or plastic wrap. Repeat with the remaining dough balls and filling.

4. In a large nonstick skillet, heat 3 tablespoons of oil over medium-high heat. Put two or three dough balls seam-side down in the skillet and immediately flatten them with a spatula to a width of about 4 inches. Reduce the heat to medium-low and fry the pancakes until golden brown and crispy on the bottom, 3 to 4 minutes.

5. Flip them and cook until slightly springy to the touch, 3 to 4 minutes more. Transfer the pancakes to a wire rack or paper towel-lined plate when done. Repeat with the remaining dough balls, wiping the skillet clean and adding fresh oil for each batch. Cool slightly before serving.