Everclear Brings Its World Of Noise On The Road

If there’s one phrase to describe Art Alexakis in relation to his musical career arc it would be that of a late bloomer. It was in 1992 when the L.A. native recorded a demo for what would become his group’s 1993 full-length debut World of Noise. Time apparently flies when you’re having fun because Alexakis is out on the road supporting the 30th Anniversary Deluxe Edition of this formerly out-of-print release.

The new version contains six bonus songs including the previously unreleased “Drunk Again” and “Nervous & Weird 2001 Remix” and is currently only available on streaming platforms. A vinyl-only version will be available for release later in the year. And while 30 is a nice round milestone number, Alexakis admits the decision to reissue World of Noise was the end result of some decluttering.
“While I knew it was the 30th anniversary, [reissuing it] really wasn’t in the forefront of my mind despite it being out of print for a while and not being [available] on any platforms,” he said “But in January, me and Freddy Herrera, my bass player at the time, were going through the storage and some boxes I hadn’t dealt with for years. I kept moving them from space to space. I found all these tapes and the original four-track master and mixed tapes for World of Noise. I had them baked and also found a bunch of other tapes that weren’t even in boxes and didn’t even have names on them. I took those to this guy to bake them. I found the original tapes for all those bonus tracks. I never did like the mastering that they did when it went to Capitol.”

Going back 30 years in time might prove to be an awkward exercise for some artists, not unlike revisiting old yearbook photos or journal entries, but the sexuagenarian singer-songwriter, it was more about presenting the band’s earlier work on his terms.
“There is a song on the Everclear page that everyone’s freaking out about called ‘Deep In and Empty Out,’” he explained. “It was a [friggin’] sketch. Nobody was supposed to put it out for people to hear. It’s like coming to my house and me half-cooking food and giving it to you. I wouldn’t like it and I wouldn’t do it. It’s hard for [fans] to understand. I don’t want to be a dick to people who like my music. That’s not nice and it’s stupid. But at the same time, I’ll tell you when something is done and it’s representative of what I want you to hear. That’s a long-winded way of saying that World of Noise was a release, and even though it’s got some flaws to it and it’s not where I am know, it is a really amazing document of where we were at that time. That’s one of the reasons I wanted to make that record at the time.” 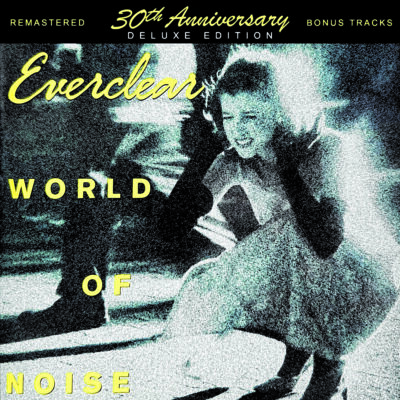 While Everclear broke at the same time as a number of other Pacific Northwest acts including Pearl Jam, Nirvana, Alice in Chains and Soundgarden, the quartet’s trajectory was quite different. Portland was Alekakis’ home base versus Seattle and while labels were swarming to the Jet City to sign bands, Alexakis was making his own way by sending out the demo that eventually became World of Noise out to labels, radio stations and publishing outlets around the region while working full-time as a graphic artist. His persistence paid off and resulted in an invite to a certain Texas music festival.

“We were just playing in the clubs and we’d have eight people in Portland come see us,” Alexakis recalled. “We were out playing all summer and all fall and I got a chance to make a record in a four-track basement through trading some gear. I told the guys we should go see what we got. In my mind, if it wasn’t working and nothing special about those recordings—I was just going to cut my losses, move to L.A. and become an A&R guy. That was probably what was going to happen. When I started mixing, I knew there was something there. I sent an early mix of it to SXSW and they called me about two weeks later to say we could showcase and they wanted to know if we could be there in a month and a half. I said yes despite the fact that we didn’t have any money for gas or anything. But I figured it out dude.”

Fast forward to the present and Everclear is on the road with fellow ‘90s peers Fastball and The Nixons. As someone who can still wax rhapsodic about hearing Led Zeppelin, Aerosmith and the Pixies for the first time, Alexakis is all about keeping it fast and loose on stage when asked what fans can expect when they come out to see the band.
“If you’re never seen Everclear before, live, we’ve never sounded like our pop hits,” he said. “We play them but they’re more rock. I never thought studio and live were supposed to be the same thing. They’re supposed to have their own flavor to it. That’s the age I grew up with.”

As someone who has weathered plenty of rough times, from drug and alcohol addition to a 2019 multiple sclerosis diagnosis and an early 2021 bout with COVID-19 that had his symptoms flair up and put him in the hospital for two months, resiliency and optimism remains Alexakis’ primary superpowers.
“My mom taught me to grab ahold of something, sink your teeth into it and just not let go,” he said. “I’m 60 now and talking 30 years of music and a band and going to play shows where people are still buying tickets to come see me play and sing my songs. I’m full of gratitude brother. I’m serious. I’m sober. My program is strong. I’m doing everything in my power to be better with my disease. I don’t ever want to be in a wheelchair. I want to live 20 or 30 years as best I can. What’s going to happen? I don’t know. But it ain’t gonna happen if I don’t try.”

Everclear will be appearing with Fastball and The Nixons on July 21 at The Patchogue Theatre for the Performing Arts, 71 E. Main St., Patchogue, Visit www.patchoguetheatre.com or call 631-207-1313. This bill will also be appearing on July 22 at Palladium Times Square, 1515 Broadway, NYC. Visit www.palladiumtimessquare.com or call 212-496-7490 for more information.