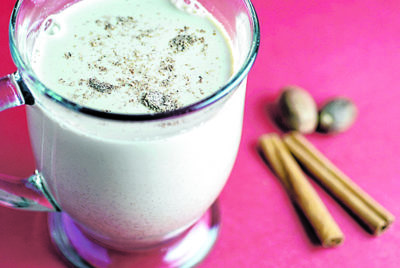 Whether you prefer a classic eggnog, or something lighter, but still as tasty, here are a couple of eggnog variations for you to serve at your next holiday event.

In a large bowl and using a mixer, beat the egg yolks together with the sugar for approx 10 minutes. Mixture should be firm. Slowly, add in the bourbon and brandy—just a little at a time. Allow mixture to cool in the fridge (for up to six hours). Approximately 30 minutes before your guests arrive, stir the milk into the chilled yolk mixture. Stir in one and a half teaspoons ground nutmeg. In a separate bowl, beat the cream with a mixer on high speed until the cream forms stiff peaks. In yet another bowl, beat the egg whites until stiff peaks form. Gently fold the egg white mixture into the egg yolk mixture. Gently fold the cream into the egg mixture. Ladle into cups. Garnish with remaining nutmeg. Serves: eight.

For those of us who really don’t need any extra naughty bits over the festive season, this low fat eggnog is perfect.

sweetener or sugar, to taste

In a medium saucepan, heat the milk, Egg Beaters and sweetener or sugar. Stir continuously. Heat and stir until the mixture thickens slightly—enough that it can coat the back of a spoon. Stir in the vanilla extract, rum extract, one pinch of nutmeg and one pinch of cinnamon. Remove from heat.

Cover with plastic wrap and refrigerate until the eggnog has cooled (at least three hours). Just prior to serving, ladle your yummy low fat eggnog into glasses, and garnish with a sprinkle of nutmeg and cinnamon. Serves: six.

A recipe that is easy to make. You’ll have this quick eggnog ready to go in no time.

In a large bowl, beat the eggs using an electric beater. By turn, add milk and sugar. Beat until mixture thickens slightly. Add in the vanilla extract and ground nutmeg. Cover with plastic wrap and refrigerate until chilled (at least three hours). Serves: six.