Editor’s Note: As this went to press, there was a dispute between the Trump administration and a federal judge over her injunction to continue the census enumeration until Oct. 31, and not end it Sept. 30, as the executive branch ordered. Secretary of Commerce Wilbur Ross said he will not abide by the ruling and the Census Bureau will cease counting operations by Oct. 5. Rebecca Sanin, the president/CEO of the Health & Welfare Council of Long Island, who is involved in census outreach efforts, said information she received indicated that door-to-door counting efforts and self-response will continue until Oct. 5. Anton Media Group, through a public relations firm, twice reached out to Census Bureau officials and was promised a response, but as of this posting had not heard back.

Every 10 years, the Constitution mandates, everyone in the United States must be counted. This tally determines how the congressional seats would be divided among the states. For decades, it has also shaped how trillions of federal funds are disbursed over the following decade. Both of these aims have far-reaching implications for citizens’ lives and how political and economic power is divvied up. This accounts for the vigorous efforts by elected officials to get a high participation rate among their constituents.

Census Day is April 1, and provides a statistical snapshot of the country. The Census Bureau, part of the Department of Commerce, sent every household in the United States a questionnaire with a unique 12-digit ID to respond online if one wished. Based on the figures released by the Census Bureau, most opted to respond via the web instead of mailing in the document. Follow-up phone calls also raised what officials called the response rate.

The households which did not respond (or had incomplete answers) started receiving follow-up visits by an army of enumerators in August. Traditionally, these visits begin in May and end in August, but the coronavirus delayed the operation.

Critics charge that the Census 2020 effort has been politicized by the Trump administration. First, it attempted to place a question about residents’ citizenship status on the census form, but was rebuffed by the Supreme Court. After first agreeing to end the count on Oct. 31 due to the pandemic delays, the administration did an about face and decided to stop the tally on Sept. 30. In addition, the president directed that undocumented residents should be removed from the final count for purposes of congressional apportionment. The citizenship records would come from state and federal databases. Both of these directives have drawn lawsuits and court actions and their fate is not known as this was posted. 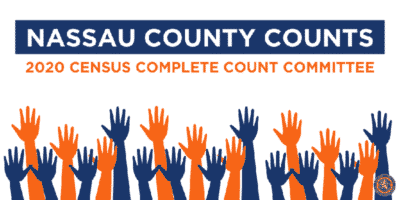 The publication Long Island Counts: 2020 Census Report, authored by the Office of Nassau County Comptroller and the HWCLI and CCC, made a stark case for being counted. “If we don’t count our families, we render them invisible for the next 10 years and we can count on overcrowded classrooms, congested and neglected highways, underfunded hospitals, and empty storefronts on our Main Streets until the next Census,” it noted.

County Comptroller Jack Schnirman, in a statement to Anton Media Group, said, “The report released by my Office’s Policy and Research Unit, This is Nassau: Demographic Profile, showed big changes to our communities that will continue in the years ahead. The Census needs to accurately capture that, which is why we absolutely cannot afford an undercount.”

Response rate maps from the Census Bureau show that county areas with minority and immigrant populations have much lower participation.

Have No Fear, Be Counted

Enumerators have faced resistance from people who are suspicious of the federal government, and also fear that the information may be used to discover and prosecute undocumented aliens.

The Federal Census Act prohibits the Census Bureau from disclosing individual census responses, even to other government agencies. 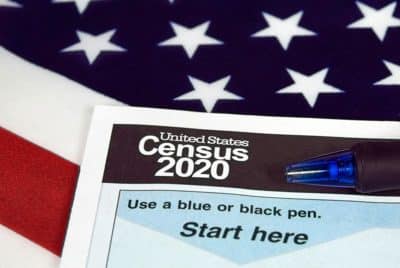 The Lawyers’ Committee for Civil Rights Under Law has set up the Census Protection Hotline for individuals who have questions or concerns about the census process. It has partnered with civil rights organizations representing ethnic minorities. A press release notes that the hotlines will answer calls in English, Spanish, Arabic and eight Asian languages.

The release stated, “Individuals can ask any question related to the census such as when the census starts/ends; if everyone has to fill out a questionnaire; how info is kept confidential; or how to fill out the form for different living situations [such as] shared custody, multiple family members, child in college, family member. Individuals can also call in to report problems in being counted—Census online form not loading, receiving fake Census information, finding out what credentials a Census worker should have.”

Every region has been assigned “Census ambassadors” to work with local leaders to ensure the highest possible participation.

The ambassadors’ “Talking Points” printout stated, “We will live with the consequences of these questions for the next 10 years. We only have one chance to get this right. The funding levels and congressional seats that are set in the 2020 Census cannot be changed until 2030. This is our only opportunity to set Long Island on the right course for the decade ahead.”

The printout added, “Every single person counts. The Census can be a tool for empowerment and bringing our communities together. It is a bipartisan issue—everyone benefits when everyone is counted. By completing the Census, we can all contribute to a brighter future for our region.”

On Sept. 18, at the “Yes We Can” Community Center in New Cassel, Nassau County Executive Laura Curran highlighted the county’s final push to increase 2020 Census self-response rates. The means include community engagement, social messaging campaigns, and Census Mobile Questionnaire Assistance events prior to the upcoming deadline.

She announced that the county’s outreach agencies are pressing with multilingual multimedia messaging over the remaining two weeks. Nassau will use its SMS system, email listserve, and social media networks to get the message out until the deadline. The county also had Census Bureau assistance stands stationed at COVID-19 testing clinics.

“Every additional person that fills out the Census in the next two weeks will help our communities build back stronger from this crisis and catalyze a future of hope and opportunity for every family on Long Island,” Curran said.

Thanks to an aggressive outreach campaign that kicked off in February 2019 with Curran’s formation of the Complete Count Committee, Nassau County leads all counties in New York State in census responses with 73.4 percent. However, the executive is emphasizing the need to increase participation numbers in the county’s lower socioeconomic areas, such as New Cassel.

“We are at full-court press to get it done,” Curran said.

The county response rate compared favorably to the state’s 62.8 percent, but she emphasized that places like New Cassel, Hempstead, Roosevelt and Uniondale are below that average. 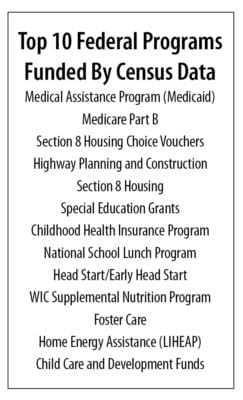 Curran mentioned the importance of participation for the county to receive its fair share of Community Development Block Grants, dispensed by the U.S. Department of Housing and Urban Development (HUD). These, according to the HUD website, “provide annual grants on a formula basis to entitled cities and counties. The grants develop viable urban communities by providing decent housing, a suitable living environment, and expand economic opportunities for low- and moderate-income persons.”

“We use this money to put food on the table for more than 25,000 families who’ve been food insecure during the pandemic,” Curran observed. “My administration has used this money to fund health programs, safety programs and accessibility programs just like ones here at the ‘Yes We Can’ Center. It’s also helpful for funding mental health and substance abuse services, and senior and youth services.”

She summed up, “So everything you do in life is affected by this money from the federal government. If you live in Nassau County you know we send more money to Washington that we get back. So it’s incumbent on us to make sure we get our fair share.”

Town of North Hempstead Councilwoman Viviana Russell, who represents New Cassel, stated, “It takes less than 10 minutes to complete the Census [questionnaire], [but] that will have a lasting impact for 10 years.”

She went on to note that though the county’s response rate was good, in New Cassel, it was at 53 to 54 percent, “and that needs to change. We are in Hispanic Heritage Month, and we have to make sure that our Hispanic brothers and sisters are counted.”

She added that the Westbury-New Cassel area has a large Hispanic population and there had been outreach efforts to try to raise the participation rate.

“The decisions made based on the information obtained from the 2020 Census will affect the quality of life for the people here on Long Island for the next 10 years,” said North Hempstead Supervisor Judi Bosworth in a statement. “It’s our responsibility as a town, and as a member of the greater Long Island community, to ensure that every person is counted.”

Amy Flores, executive director of the county’s Office of Hispanic Affairs, said her office “has been working diligently the past few months with the Census [Bureau] making sure that everybody is counted and everybody has the proper information to understand that their immigration status will not be held against them.”

She added, “Our office is completely bilingual and we’d like to offer assistance.

Curran reminded residents that there is no citizenship question and “It is a felony to share Census information with anybody, including other federal agencies.”

Curran introduced Bishop Lionel Harvey of First Baptist Cathedral of Westbury after noting that clergy were part of her Complete Count Committee.

“What we have been doing as a clergy is making sure, because we have a captive audience every Sunday, that this information is disseminated to our black and brown community,” the bishop said. “This is all very important because if we have leaned anything through this pandemic, it is that [those  communities] have been impacted disproportionately [by the] health struggles that were taking place during COVID-19.”

He added, “Ten years is a long time. And to be undercounted for 10 years is going to cause ramifications that will be unbelievable.”

During a Q&A, Curran admitted that “there is a general lack of trust and general fear. We want to push back against that. The point we want to make is that [filling out the questionnaire] is safe, and that it will benefit you and your family directly.”

—Portions of this section were provided by the Office of County Executive.

Online: Go to 2020census.gov and use the 12-digit Census ID that can be found on the questionnaire you received from the Census Bureau.

Mail: Most households received a census form in the mail in March. Complete the form using blue or black ink and return it in the envelope provided. If the return envelope is lost, mail it to: