“‘He’s a bear; he’s a horse; he’s just too big; what do you feed him’,” Lou Damore said are some of the things he hears about Cooper, his 130-pound puppy each week during pet therapy visits to St. Joseph Hospital in Bethpage. 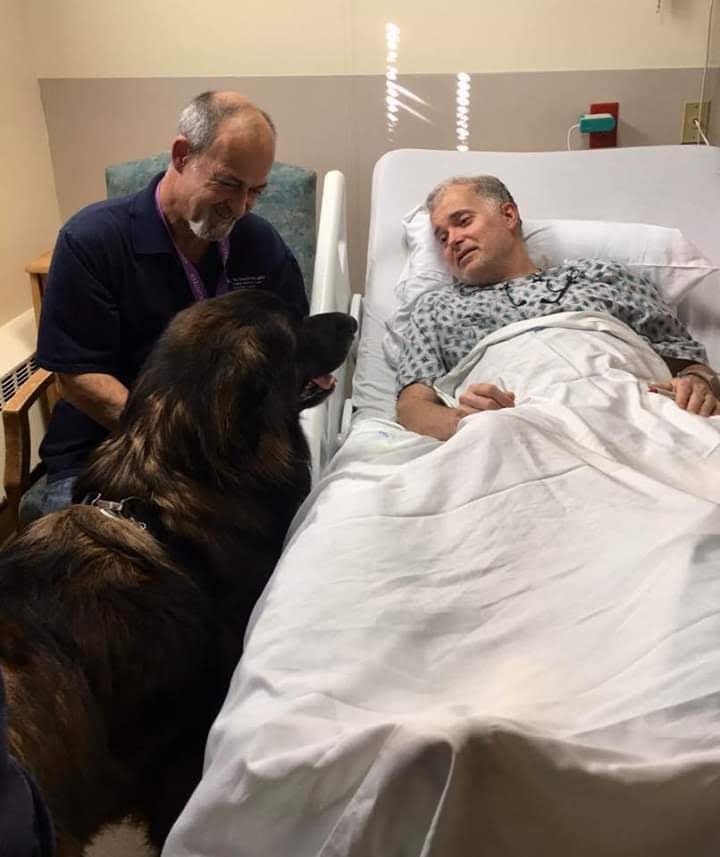 Cooper, not actually a puppy, is a seven-and-a-half-year-old Leonberger, who has earned one of the top levels of certification for pet therapy through Bideawee in Wantagh. The Leonberger breed of dogs are obedient, loyal and loving gentle giants.

“He is five-foot-four when he stands on his hind legs; no one has to bend down to pet him, even if they are lying in a hospital bed; Cooper just walks up and puts his face right next to theirs,” Damore said. “Cooper has gentile eyes; when they see his eyes, they just want to hug him to death.” 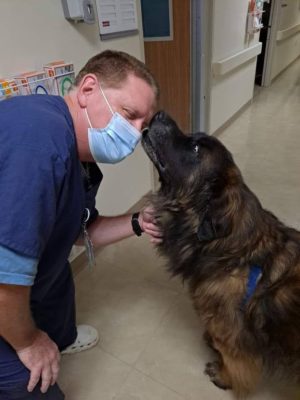 Bideawee’s pet therapy program is designed to explore all of the benefits that the relationship between people and pets can provide.

“Although Bideawee staff spends a lot of their time finding forever homes for the dogs, cats, puppies and kittens in our care, we really focus on the human-animal bond as a whole. And that encompasses so much more than adopting and fostering,” said Leslie Granger, CAWA, president and CEO of Bideawee. “We are proud to go into the community and provide a symbiotic connection between our animals and people who might be experiencing illness or stress.”

The program launched in 1986 and currently has more than 60 active therapy teams.

“I have been doing this for many years now,” said Damore. “Falcor, my Great Pyrenees, was my first therapy dog, back in 2013.” Cooper began his service as a pet therapy dog four and a half years ago, when he was three years old.

“One of the types of facilities our generous pet therapy teams frequent are local hospitals,” Granger said. “These institutions have been under an exorbitant amount of stress lately and it’s so rewarding to provide a smile to patients and staff alike; as COVID restrictions lift and things become more normalized, we hope to bring Bideawee’s pet therapy teams into more hospitals.” 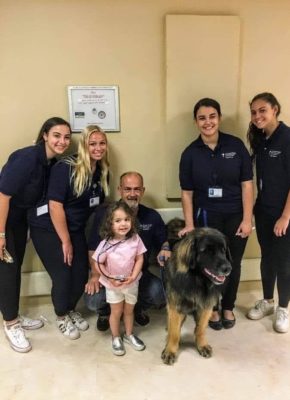 Some dogs are restricted to the kinds of tasks and situations that they are suited for. The best of the best receive a “complex” mark on their certification.

“Some dogs can’t handle all of that stimulation,” Damore said. “The trainers will bring a group of people in; they will test their response to having someone approach in a wheelchair; they might see how they react to someone on crutches or moving with a walker; they test with a lot of noise and commotion.”

The owners are also trained to respond properly to different scenarios, and how to handle their dogs in certain situations. Dogs and their owners are reevaluated every two years to ensure they remain fit for the program.

Many of the dogs in the program are Retrievers, Labradors and Huskies because of their disposition. 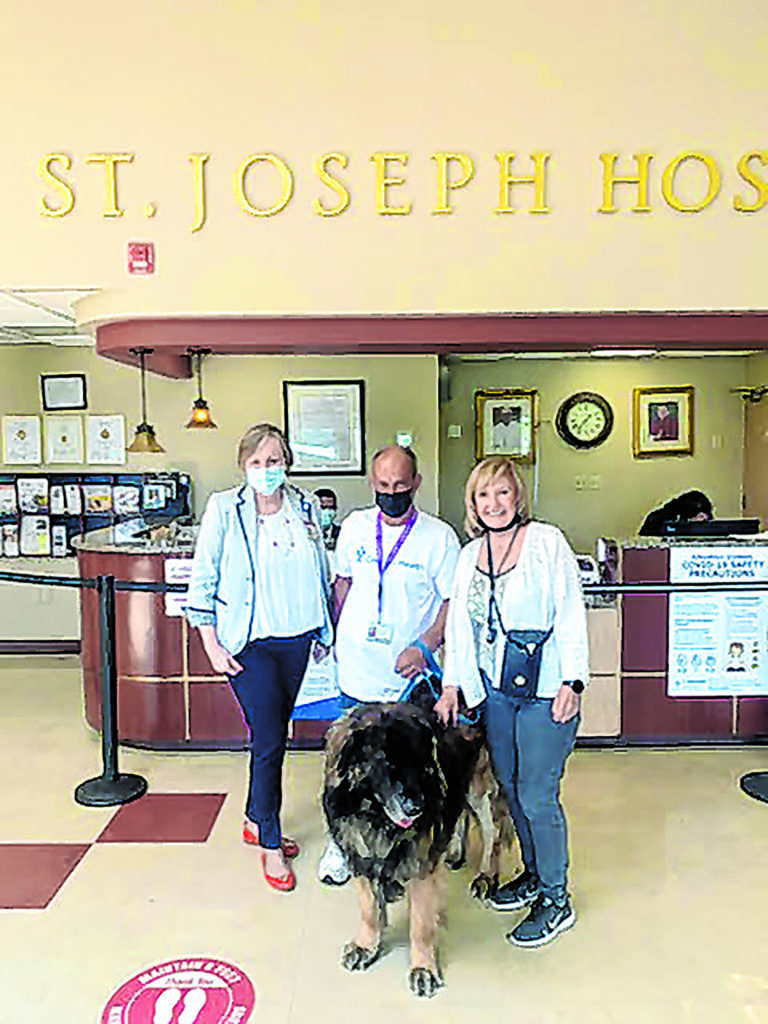 “It is not necessarily the size of the dog that matters, but more about their demeanor,” said Damore. “Cooper is just an amazing dog.”

The Leonberger breed first appeared in the United States in the early 1900s from Germany, popular as farm dogs, used to pull carts. Male Leonbergers can weigh as much as 160 pounds and stand just less than three feet at withers (back height). At first glance they are intimidating because of their size and muscular stature, but within seconds you understand that this regal beast is intelligent and kind. There is nothing better than an interaction with one of these dramatically massive canines.

Cooper has participated in storytimes at libraries, test-taking destress events at Hofstra University and therapy situations at other local schools and hospitals.

“When you are there and see the smile on these patients’ faces, it makes you take a step back,” Damore said. “Some patients don’t get visitors or they have dogs of their own at home that they are missing.”

Cooper and his human see more than 40 patients at St. Joseph Hospital in Bethpage on Thursdays.

Damore said, “Recently, one woman was having a tough time during her hospital stay and hadn’t smiled in two weeks while she was there. When Cooper walked in, she lit up.”
Patients also love receiving one of Cooper’s personal business cards during their hospital visits. He has his own following on Facebook (@CooperLeonberger).

Requests can be made through Bideawee (3300 Beltagh Ave., Wantagh) for pet therapy visits. Visit www.bideawee.org to learn more about the organization or to learn how to become a Pet Therapy Team Member.