What Community Means To Dar Williams

This year is turning out to be quite a busy one for Dar Williams. She recently reunited with fellow singer-songwriters Richard Shindell and Lucy Kaplansky to reform alt-folkie supergroup Cry Cry Cry after nearly two decades. Cry Cry Cry will be appearing at Landmark Theater in Port Washington next month.

Next month will also see the Mount Kisco native releasing her new book, What I Found In a Thousand Towns. Originally formed back in 1998, Cry Cry Cry yielded a single self-titled album of mostly covers steeped in harmonies that evolved out of sound checks that Shindell and Williams were doing while touring together in the mid-1990s. As such, the record Cry Cry Cry, with its interpretations of songs by the likes of R.E.M., Greg Brown, Robert Earl Keen and Ron Sexsmith, earned the group a fervent following that’s been clamoring for a reunion. It’s a notion that’s also been on the minds of the three musicians involved.

“We all were thinking about it for a long time on our own. Then Lucy [Kaplansky] wrote and said we had an offer to play at a [the Clearwater Folk] festival if we wanted to reunite. We were all hiding these songs in our back pockets that we had saved for a possible reunion, so it was a very instant yes,” Williams admitted.

With only a handful of dates to go on, Williams is unclear how long this tour will go on. But she’s thrilled to be back on the road with her old friends. Throw in an additional upcoming solo show at the Third Annual Folk Festival that’s going to be held at Glen Cove’s Morgan Park, and Williams will be happily playing Long Island, a place she’s had great success with in the past, for two consecutive months.

“Every part of Long Island is great. I’ve never had a bad concert out there. I used to play the IMAC Theater [in Huntington], I’ve played in Bayshore and of course, the Landmark,” she said.

Credit the communal vibe you’ll find infused throughout Long Island that keeps Williams coming back and is a major theme in her new book. As a working musician who has traveled all over the country, she’s often been fascinated by the dynamic found in small towns. And as an academic who taught for a number of years at Wesleyan University, Williams began researching societal commonalities that she kept seeing crop up. 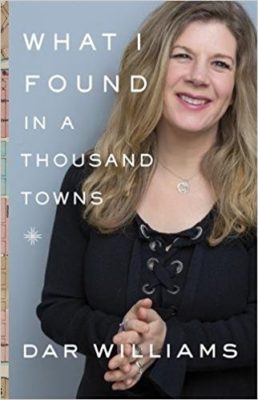 “I watched towns come into some kind of local prosperity over the last 20 years and I got interested in what towns were doing that helped them either find their center or souls or helped them function in a resilient way. It turns out there are all these words for what I was looking for like high trust versus low trust. And something called social capital, which is a bank account of good will as opposed to a financial bank account,” she explained. “If you’re looking at Port Washington, the Landmark and the way it brings in staff and volunteers and invites all sorts of audiences in and the use of that space for concerts, it’s something that I believe brings in something I call positive proximity. And positive proximity is the sense that living close to other people is actually a force of good. Being around a lot of people allows you to do more things and have more fun. Towns with high positive proximity will have things like the Landmark and a downtown with a lot of independent stores and restaurants. It’ll be long, so people can walk up and down and around and it’ll have a nice train station and things like that. These things of course, generate positive proximity too. That sense that somebody cares about your well-being in town generates a sense that you want to be a part of it.”

Williams’ passion for this subject runs deep and depending on how long the Cry Cry Cry tour goes, she’s planning on going back out on a book tour as well. Attendees can not only look forward to hearing Williams read from the book, but she’s also interested in getting feedback from those coming out. And there are even plans to release another studio album in 2018.

“I’m really excited to get into towns and talk about the book and then turn it over and find out what’s going on in peoples’ towns that they are excited about. Or what’s happening in your town that you see for your town. As opposed to what’s wrong, because everybody knows what’s wrong,” she said. “The book kind of took a lot of focus and energy. But once it was done, the melodies started to trickle back in pretty quickly. I’m thinking that I’ll actually have something sooner rather than later.”

Dar Williams will be appearing on Aug. 20 at the Third Annual Folk Festival being held at Morgan Park, Germain St., Glen Cove. Call 516-671-0017 or visit www.morganparkmusic.org for more information.