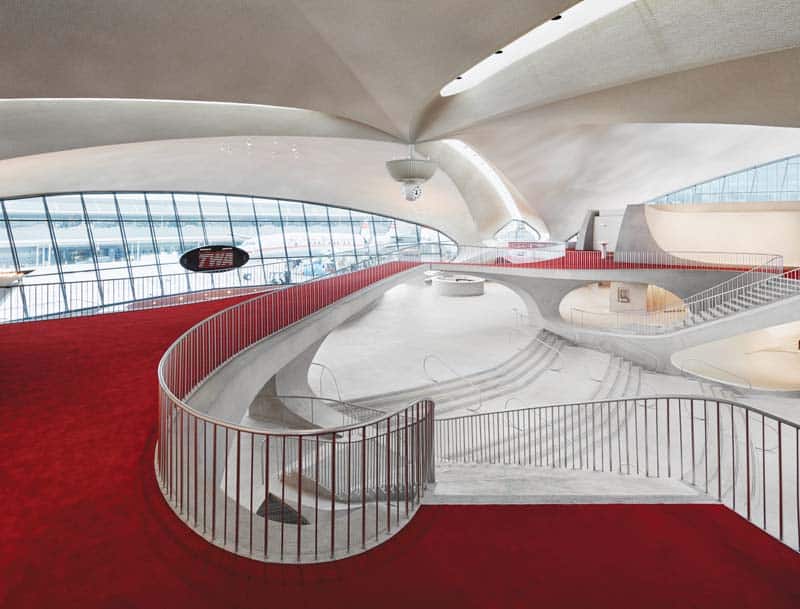 Up, up and away. It was a sight for soaring eyes on May 15, as the brand new TWA Hotel opened at JFK Airport. The ribbon cutting celebration was led by New York Governor Andrew M. Cuomo as JFK’s only on-airport hotel opened its 512 soundproof guest rooms, restaurants and retail outlets to the public.

The hotel, which, under careful restoration, preserves the iconic Eero Saarinen’s landmark 1962 former Trans World, will deliver world-class airport accommodations unlike any other. MCR, the developer and lead investor, is one of the largest hotel owners in the United States. The redevelopment plan is a public-private partnership between MCR, JetBlue, and the Port Authority of New York and New Jersey with Turner Construction as the building contractor.

When the TWA terminal opened in 1962, it epitomized the glamour and optimism of the Jet Age. The structure was designated a New York City landmark in 1994 and, after its 2001 closure, was listed on the National and New York State Registers of Historic Places in 2005.

“Eero Saarinen’s cathedral to aviation has always looked toward the future,” said Tyler Morse, CEO and Managing Partner of MCR and MORSE Development, in a press statement. “We restored and reimagined his landmark with the same care that he devoted to his design. No detail went overlooked—from the millwork by Amish artisans to the custom font inspired by Saarinen’s own sketches to the one-of-a-kind manhole covers. Starting today, the world can enjoy this mid-century marvel for many years to come.”

In addition to its many guestrooms, the new structure includes 50,000 square feet of conference, event and meeting space; a 10,000-square- foot public observation deck; LEED certification and was impressively redeveloped and privately funded without government subsidies.

Now for the good stuff. Among the six restaurants and eight bars include The Paris Café by Jean-Georges, a 200-seat restaurant serving breakfast, lunch and dinner from an open kitchen in collaboration with Tastes on the Fly; The Sunken Lounge, a cocktail bar operated by Gerber Group and located in the historic chili pepper red-carpeted lounge; a Lockheed Constellation “Connie” L-1649A transformed into a cocktail lounge operated by Gerber Group; Departures Hall grab-and-go dining operated by Fooda, including restaurants such as Antico Noè, Empanada Republic, Fresh&Co, The Halal Guys and Playa Bowls and an Intelligentsia coffeebar and coffee carts throughout the hotel grounds.

In addition to the lap of luxury is a rooftop infinity pool and observation deck with views of runway 4 Left/22 Right plus; the world’s biggest hotel gym: a 10,000-square-foot fitness center operated by The Wright Fit and a Phaidon + Herman Miller Reading Room, where guests are invited to relax on mid-century modern furniture by Herman Miller while browsing Phaidon books. Museum exhibitions on TWA, the Jet Age and mid-century modern design curated by the New-York Historical Society offer an educational history on the company and aviation.

The new TWA Hotel has been included on Thrillist’s Best New Attractions list.

Ready to check in? For more information, contact info@twahotel.com or visit www.twahotel.com.