To most of the world, Candice Night is the lead vocalist for Blackmore’s Night, the medieval folk rock act founded by her husband, ex-Deep Purple/Rainbow guitarist Ritchie Blackmore. But to her two kids, 6-year-old Autumn and 4-year-old Rory, Night is mom, a role she takes very seriously. So much so that when she decided to follow up her 2011 solo debut Reflections with a children’s album, last year’s Starlight Starbright.

It was a labor of love that initially came out of her desire to ensure that her voice would be the first and last sound her first child would hear waking up or going to sleep. Recording the music was looked as a backup plan in the event that Night was too tired to sing, which wound up never being the case. It instead evolved into becoming a project that the Hauppauge native hoped would help other parents bond with their children, a point she excitedly made over lunch at a diner two minutes from her Long Island home.

“I thought it might be interesting to record these songs for the parents, moms or dads who feel that they can never sing to their child. It’s kind of robbing a child of that intimate pleasure of that bonding moment with their parents. So I thought even if the parent sat and rocked their child and played a soothing CD, it would just really relax them so much and be a soothing memory and moment,” she said. “Even if they didn’t later on physically remember it, it’s in there. That’s where I ended up fleshing it out and adding the rest of the songs and instrumentation and perfecting the whole thing.”

The end result is a collection of 13 songs that includes an airy arrangement of “Rock a Bye Baby” gently pushed along by acoustic guitar and recorder, originals (the buoyantly delicate “Robin Redbreast”) and selections from the John Denver (the baroque-flavored “Annie’s Song”) and Kenny Loggins canons (a wistful “Return to Pooh Corner”). Equally effective are Night’s forays into film for a piano-kissed reading of “So This is Love” from Cinderella and a nod to Marilyn Monroe’s lightly bouncy “Down in the Meadow” from the 1954 western River of No Return.

There are also parts of Starlight that make it a family affair, from the gorgeous acoustic guitar arrangement that Blackmore came up with for “Sleep Little Baby,” whose tempo was based on the rhythm created by the cadence of his then-infant daughter’s bassinet. The couple’s daughter Autumn even has co-writing credit for “Lullaby in the Night,” a fact that Night is fiercely proud of.

“[Autumn] has always been one of these kids who gets up and belts out a song about brushing her teeth. When she was three and a half, she was sitting in a big rocking chair that I would rock her to sleep in and I was outside of the room folding laundry. She was outside singing a song she made up herself holding her dolls with these words and melody she made up. It was just so natural for her and she was sitting there, rocking away and singing the song,” Night recalled. “Like mommarazzi, I ran and got the camera and videoed her doing it. I was right outside the door and got her doing it. When the producer came, I said we had to do this. It’s not like anything I would write. It was coming from such a pure perspective. She makes up stuff all the time. This was the first wow moment. There are also lullaby stories she’s written and she continues to write.” 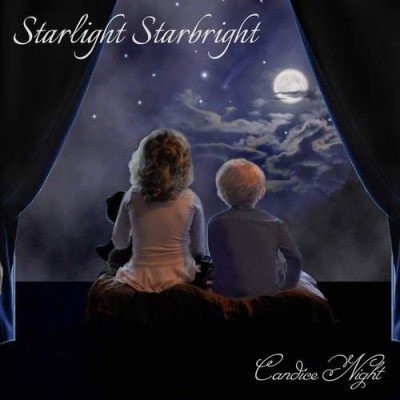 The feedback Night has gotten from fans is also rewarding. Not only has Starlight, Starbright wound up being used to provide a tranquil atmosphere in places like pediatricians’ offices and birthing centers, she’s also gotten other kinds of rewarding feedback. One mother, whose daughter has sensory issues, shared how family dinners had now become a regular occurrence since the music on this CD was the only thing that would keep her child content enough to break bread with her siblings and parents. Or how the proprietors of a local bagel store regularly play the album on the commute home to decompress from the day’s pressures. Most intriguing was a story Night heard during an NPR interview she did having to do with a dog that had previously been a bait animal and was being rehabilitated.

“This man has a pit bull that was used as a bait dog and said he used to play the dog classical music or jazz, because he was understandably skittish,” she explained. “But he said as crazy as it sounds, my CD was the dog’s new favorite CD. He said he could get the dog in the car and could drive him places. The CD is on and the dog is sitting in the back of the car, relaxed. So all these things I never thought about are such amazing gifts for me to hear.”

Blackmore’s Night Will be appearing on Oct. 14 at The Patchogue Theatre for the Performing Arts, 71 E. Main St., Patchogue. For more information, visit www.patchoguetheatre.com or call 631-207-1313.