Life certainly can take you in unexpected directions and also into familiar territory. For the past five seasons of Netflix’s Fuller House, D.J. Tanner-Fuller, who is portrayed by actress Candace Cameron Bure, has found herself living in her childhood home with her younger sister and aspiring musician Stephanie (Jodie Sweetin) and D.J.’s lifelong best friend and fellow single mother Kimmy Gibbler (Andrea Barber). In Fuller House’s fifth and final season, the Tanner childhood house is fuller than ever with D.J.’s three boys, Stephanie’s new baby and Kimmy’s feisty family as the three prepare for a triple wedding and celebrate all of the memories that have led them there.

Fuller House is a sequel series of the beloved sitcom Full House, which aired on ABC from 1987 to 1995 for eight seasons that produced 192 episodes. In addition to Cameron Bure, Sweetin and Barber, the original sitcom also starred Bob Saget as Danny Tanner, John Stamos as Jesse Katsopolis and David Coulier as Joey Gladstone. All three make guest appearances throughout Fuller House’s five seasons, which already adds to the heavy nostalgia factor that Fuller House brings to its audience.

So how would Cameron Bure, who fell into the entertainment business when she was only 5-years-old, describe her character D.J. Tanner-Fuller, who she has portrayed on-and-off for the past three decades?

“Well, D.J. is like everyone’s big sister and hopefully everyone’s best friend, but she is a perfectionist,” Cameron Bure said. “She’s like you’re overly cheery, completely scheduled, Type-A personality, perfectionist. She always means well, but sometimes I think her expectations are a little bit too high, not only on herself, but also on other people.” 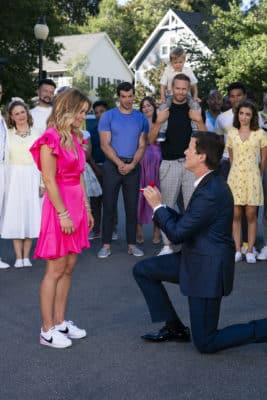 “The second half leads up to a triple wedding and lots of fun things like going to a wedding expo to decide on how they’re going to coordinate a triple wedding,” Cameron Bure explained. “And there’s a bachelor party and of course, in between all the wedding stuff, there’s lots of heart-to-heart scenes between the kids and moms because of course it’s always a show about parenting. But then the final episode you’re going to get a big triple wedding.”

And without a doubt, longtime fans of both shows can deduce that D.J. Tanner-Fuller’s life has definitely come full circle from being a mom of three boys to living in her old family home to her engagement to Steve.

“I think she’s still very much the same person and like I said she’s really driven, but she’s super goofy,” Cameron Bure said. “And I think that she really learned to accept help and that was from the very first episode of Fuller House. That was the hardest thing for her to do was to accept help from other people. And then I think that we’ve seen how much she’s grown, and of course, she has always loved her family so much, but she doesn’t always have to control everything herself and different points of view are wonderful because different people help different situations.”

So what does Cameron Bure think it is about Fuller House that resonates with so many viewers?

“It’s a show with a lot of laugh, but a lot of heart and a lot of love,” she said. “It’s about family and it’s not necessarily the family you’re born into. It’s the people who stick with you through thick and thin who are always there for you and will hold your hand when you need it to get through the tough times. That’s what the original show was about and that was still what Fuller House is about, and hopefully the legacy that it will continue to leave.”

And with a show that is all about family, Cameron Bure said that working with her fellow cast members feels like working with family. How could it not?

“Andrea and Jodie are two of my best friends and everyone else on the show has been incredible,” Cameron Bure said. “Whether they’re original cast or the new cast to Fuller House, we have been such a tight knit group and everyone has become a second family. So in that sense, it was a little easier to say goodbye this time around because we know we’re going to be in each other’s life forever.”

And with a show such as Full House that is such a staple in pop culture and Fuller House, a show that is rich in nostalgia, Cameron Bure said that she loves the fact that multiple generations can enjoy both shows.

“I just love that generations love the show together,” she said. “I love that 5-year-olds can sit with 15-year-olds and then 35-year-olds and 55-year-olds and 95-year-olds and they all laugh and they all can enjoy it together. There’s still something for everyone, for little kids and adults, and there’s nostalgia. That’s what I hope everyone will continue to love about these shows. They are timeless messages, there are more moral messages that teach us about life and all of the things that almost all of us experience. The circumstances might be different, but they’re always the same messages that we all have to go through. So, hopefully it’ll be enjoyed for years to come.”

Cameron Bure also has a very charitable side to her and has worked alongside The Salvation Army for years.

“I’ve been an ambassador for them for several years now and they’re doing really great work,” Cameron Bure explained. “They have for so many years, but especially during this pandemic they’re on the front lines as well. So I’m always shouting them out on my social media and raising money for them and encouraging people to donate. Something as small as $25 goes to feed 10 people right in your community; it provides 10 meals. So there’s a lot we can all do to help. They’re doing a great job utilizing all of that for people that need it.” 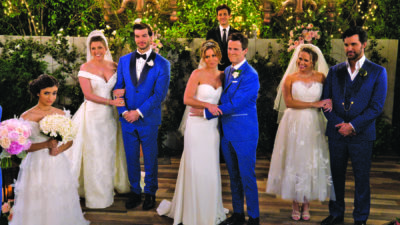 So what does Cameron Bure have planned for the rest of 2020 during the midst of the coronavirus pandemic?

“The year kind of got thrown out the window. I had my entire year lined up. I had every date in my calendar until December 31st planned,” she said. “It’s all up in the air, but I was scheduled to shoot seven Hallmark movies this year and I shot one and a half of them. So we’re just figuring out when we can resume production on those. But in the meantime, I produce all the movies that I star in for the Hallmark Channel, but I also have a production company that has several projects, scripted and unscripted. So I continue to produce while I’m in quarantine and that keeps my day really busy.”

You can currently watch the entire series of Fuller House, including the brand new season, on Netflix.