The first moment of silence will be at noon, followed by the second moment of silence at 6 p.m. Fire departments, police cars and volunteer ambulance corps will sound their sirens and horns exactly at noon and at 6 p.m. to remind residents to pause and remember our nation’s fallen heroes. 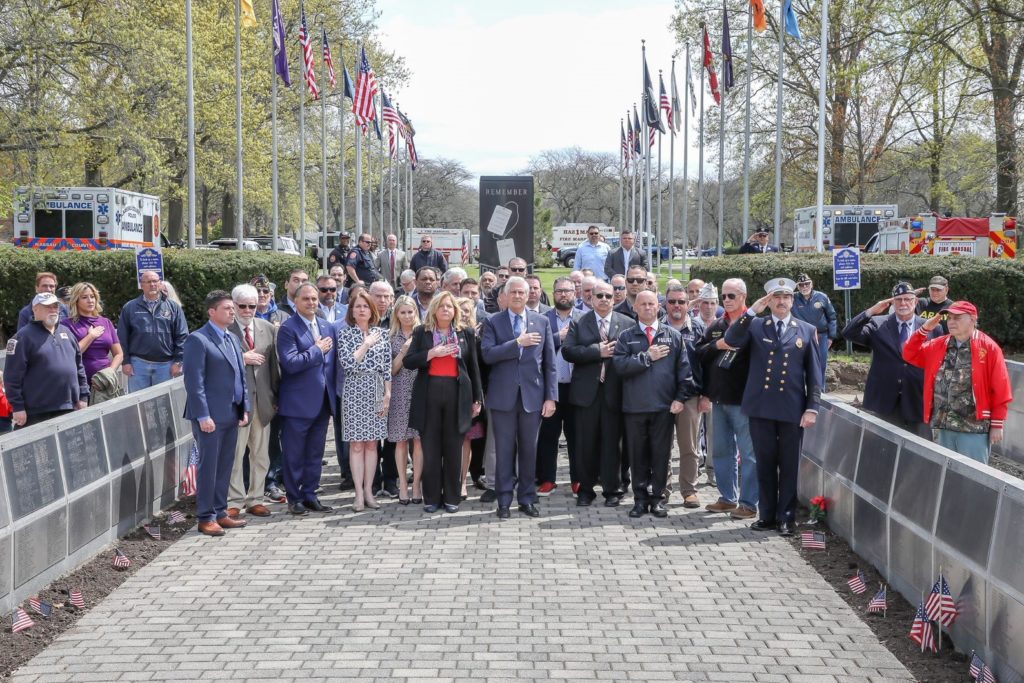 “It would be a tremendous tribute to all those that gave their lives for America on Memorial Day,” said Nassau County Executive Bruce Blakeman. “It is not just a weekend of fun but also a weekend of remembrance. A weekend when we can thank those who gave their lives and the families that lost their loved ones because that’s something that we should never take for granted. I encourage everyone to stop and remember our nation’s fallen heroes when they hear the sirens sound this Memorial Day.”

“Some of our communities are there at these ceremonies but the vast majority of our residents are not there, so the county executive’s idea and proposal will give all of our residents an opportunity to reflect about those we lost, our fallen heroes, it’s a wonderful way for all of us to remember,” said Presiding Officer Richard Nicolello

District Attorney Anne T. Donnelly said, “Every year on Memorial Day we mark the unofficial beginning of summer, but in truth, it’s a solemn holiday, especially for the families and friends of fallen soldiers. On Monday, May 30, we will honor the brave men and women in uniform who have given the ultimate sacrifice for our  county. We owe them our respect and gratitude and County Executive Blakeman’s initiative will deliver a fitting tribute to those who have so courageously fought for the country we love.”

Oyster Bay Town Supervisor Joseph Saladino said, “Let us remember that freedom is not free, it was won on the battle field by men and women from our Armed Forces who made the ultimate sacrifice. On Memorial Day, let us remember the fallen, their individual sacrifices and the pains they and their families endured so that we can enjoy the life and opportunities we have today.”

Town of North Hempstead Supervisor Jen DeSena said “I am so proud that the Town of North Hempstead will be supporting County Executive Blakeman’s Memorial Day remembrance initiative. Memorial Day honors the members of our Armed Forces who have made who made the ultimate sacrifice and I believe these countywide moments of silence will be a great gesture of appreciation for the brave men and women sacrificing everything in service to this country protecting our freedoms. We owe a great debt of gratitude to our veterans for all the sacrifices they’ve made in service to our country, and their families who are still feeling the pain of their loss. Thank you also to our fire departments, the Nassau County Police and the Volunteer Ambulance Corps for making these countywide tributes possible.”

American Legion Champlin Eric Spinner said, “I stand today as one of many veterans and Nassau County probably has the highest percentage of any county in the country, Levittown was the home to all of our returning vets, yes, the county came through for them, we had housing for them, we had open spaces–well the spaces are gone now, but the space in our hearts remains, we remember and as veterans especially and those who have lost a brother, sister, father or mother to a war, we remember and for us, every day is Memorial Day. However, what we are going to do on Memorial Day is going to be an amazing tribute to those who have gone before. Let us remember.”