Beyond Broadway Joe Explores The Other Side Of Super Bowl III

Pandemic spurs specialty foods wholesaler to open up first-time home delivery service With the COVID-19 pandemic upending everything up to and including the economy, businesses...
Read more
Sports

Fifty years have passed since the New York Jets upset the Baltimore Colts in the third AFL-NFL Championship, which was dubbed Super Bowl III and the first to carry the Super Bowl designation. The final score was a modest 16-7, but the impact of that New York win was mammoth, between the instantaneous legitimacy it gave the upstart American Football League and planting the seed for the cash cow spectacle the Super Bowl has become for the National Football League. Most fans remember the promise of a guaranteed win Jets quarterback Joe Namath promised to the press leading up to the game. In Beyond Broadway Joe: The Super Bowl TEAM That Changed Football, author Bob Lederer took a unique approach to telling this squad’s tale by painstakingly highlighting the story of every player and coach who had a part in bringing a championship back to New York.

Within each chapter, Lederer provides the story of each person dating back to their roots, through their history with the Jets and what they did in Super Bowl III’s aftermath.

He shares what Namath’s teammates thought about their quarterback’s guarantee, what the coaches discovered during the game that enabled the Jets to frustrate and stifle the Colts during the game and how the end result of Super Bowl III may have saved the existence of several AFL teams from folding (including the then-Boston Patriots and Denver Broncos). Lederer also succeeds in highlighting the contributions of a number of less-heralded Jets, including linebacker Al Atkinson, left guard Bob Talamini and overachieving defensive end Gerry Philbin—among the many names from this team modern-day Jets fans should get to know. Lederer’s greatest coup was getting access to Ewbank’s secret personnel evaluation system, which many of the coach’s players didn’t know existed. 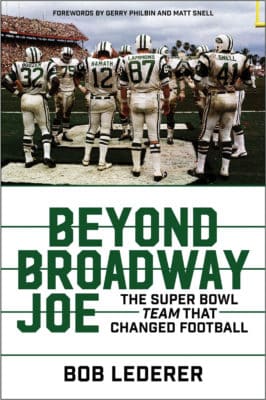 A wonderfully thorough and thrilling read, Lederer’s publishing debut is for Jets diehards, all stripes of football fan and anyone interested in learning about the many intangibles that go into creating a championship team.

Purchase Beyond Broadway Joe at HarperCollins.com or at major book retailers.

Previous article30 Years In The Blink Of An Eye
Next articleParishioners, Rockville Centre Diocese Students Attend March For Life