SUNY Old Westbury Hosts ‘The Great Chain of Being’ 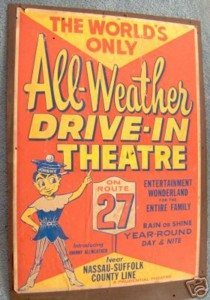 In the 1992 Cameron Crowe film Singles, Tom Skerritt’s Mayor Weber nixed a public transportation plan by simply saying, “People love their cars.” And nowhere was this more apparent than during the heyday of drive-ins, where America’s other favorite pastime, cinema, brought the two together in more than 4,000 locations across the United Sates.

For those old enough to remember this unique way of watching movies, recollections abound of going to see the latest release dressed in your pajamas if you were a kid, or not really paying attention to what was on the enormous screen, if you were there on a date. It was the perfect, low-cost form of entertainment and the setting for so many summer memories that this current generation of moviegoer addicted to Netflix and watching films on an iPhone or laptop will never experience unless they head to upstate New York, or some other part of the country, where drive-ins remain popular. 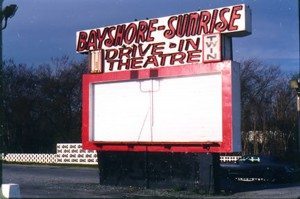 2044 Montauk Hwy., Rte. 27
Bridgehampton
This single screen drive-in with a 700-car capacity was opened in 1955, had its screen destroyed in 1976 by Hurricane Belle and was subsequently replaced. After closing in the early 1980s, the site was eventually built over to become Bridgehampton Commons Shopping Center. 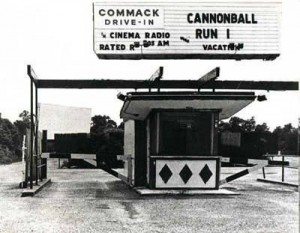 44 Veterans Memorial Hwy.
Rte. 454, Commack
Built in 1952, this single-screen drive-in was run by United Artists Theaters before it eventually had its final season in 1986. It is currently the site of a shopping center anchored by Target.

1001 Sunrise Hwy.
Rte. 27, Copiague
One of the largest drive-ins in the country, the Johnny All Weather Drive-In covered 28 acres, featured two screens and a 2,500 car capacity. A number of amenities were offered that went beyond films, including a trolley that took patrons to an on-site amusement park and playground, a full-service cafeteria with seating on the roof and an air-conditioned 1,200-seat indoor theater for inclement weather that merited a September 1957 Popular Science article shortly after it opened. Located across from an ice and roller rink, the Copiague drive-in closed in 1984 and is now the site of a Home Depot, Target and a Red Lobster.

3700 Rte. 112, Coram
Opened in June 1954, this single-screen drive-in could screen movies for 1,000 cars. The final season was in 1984, at which point United Artist Theaters converted the site into the now-defunct UA Movies at Coram multiplex.

70375 Main Road, Rte. 25
Greenport
This single-screen drive-in opened in 1950 and had a 400 car capacity. The final season was in 1975, at which point owners United Artist Theaters sold the site to the St. Peter Lutheran Church in 1976. The screen burned down in 1987 and the property is currently undeveloped by the church.

5462 Sunrise Hwy.
Massapequa
Opened in 1950 by Garry Lerner, this single-screen drive-in catered to 600 cars and was bought by Prudential Theatres in 1955. The marquee burned down in 1964 and its final season was in 1968. The current site is occupied by a shopping plaza anchored by Toys“R”Us and Burlington Coat Factory near Unqua Road. 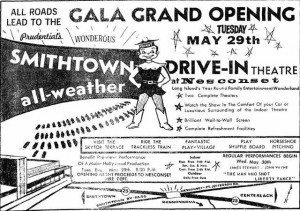 Middle Country Road
Rte. 25 at Deer Valley Drive, Nesconset
Opened in 1962 with a 2,500-car capacity, this single-screen drive-in also had a single-screen indoor cinema on site. The final season was 1985 and is currently where you’ll find the Country Pointe residential housing development.

600 Sunrise Hwy., Patchogue
Constructed by Prudential Theatres in 1965 and eventually owned by United Artist Theaters, this 1,000-car drive-in had an a single outdoor screen and an additional on-site 750-seat indoor cinema. The final season was in 1985, the UA Movies at Patchogue was erected on the site and operated for the next 20 years before closing down in 2007. The multiplex was razed and there is a proposal to develop condos and townhouses on the property.

299 Flanders Road, Rte. 24
Riverhead
Opened in June 1955, this single-screen theater catered to 1,000 cars operated until its final season in 1974 and after getting demolished, is now a commercial office/light industrial complex.

115 North Country Road
Rte. 25A, Rocky Point
Prudential Theatres opened this single-screen drive-in on June 16, 1962. It had a 750-car capacity and saw its final season in 1988. A golf ball driving range was erected on the site and has subsequently closed. The original marquee is still standing.

999 Montauk Hwy., Shirley
Yet another Prudential Theatres single-screen drive-in, this one in Shirley opened in 1953, later owned by United Artist Theatres and saw its final season in 1988. After it was torn down, the Southport Shopping Center was built here and features anchor tenants Kohl’s Department Stores and Sears Hardware.

750 W. Sunrise Hwy.
Valley Stream
New York State’s first drive-in was a single-screen operation opened in August 1938 and had a 500-car capacity. It was the fifteenth drive-in constructed in all of the United States and had its final season in 1978. It was built by Michael Redstone, father of Viacom’s Summer Redstone, and is now where you’ll find Sunrise Multiplex Cinemas. 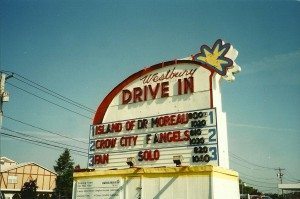 7000 Brush Hollow Road, Westbury
This three-screen behemoth opened in 1953, had a 1,189-car capacity and added its third screen in 1976. It was the last gasp for drive-ins on Long Island, being the last one in operation before closing in 1998. Cinema lives on as its replacement is United Artists Westbury 12, which also shares space with a BJ’s Wholesale Club.