Supervisor Joseph Saladino and his colleagues on the Oyster Bay Town Board recently presented the Town of Oyster Bay Martin Luther King, Jr. Distinguished Service Award to retired United States Army Staff Sergeant Arturo Jerome Edwards of Farmingdale for his service to the nation and community. 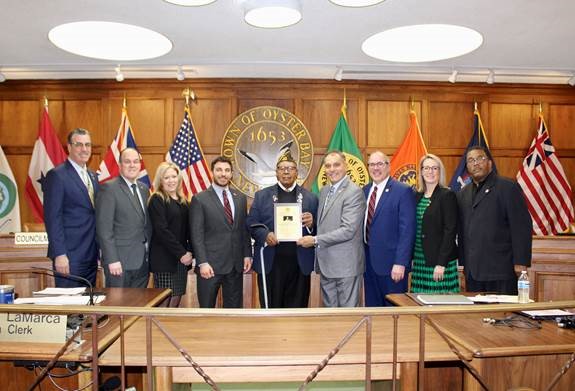 “Arturo’s serve to our nation and our community didn’t end with his tour of duty,” added Councilwoman Vicki Walsh. “He has been very involved in our community as a distinguished veteran’s advocate and is an active member of AMVETS Post 21, VFW Post 5942, and the Vietnam Veterans of America Chapter 82. He is dedicated to the service of his fellow Americans and truly represents the gold standard of community service. The foundation for a healthy community and freedoms we cherish are dependent upon the leadership of people like retired Staff Sergeant Arturo Jerome Edwards.”