An Abundance Of Heart 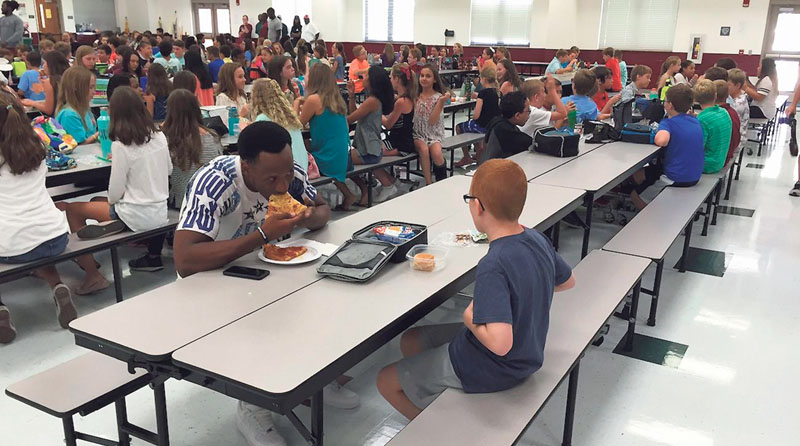 September marks the start of another new school year and, for football diehards, it’s also the kickoff to a new season. The flowing together of the two brings to mind the moving story of former Florida State University (FSU) wide receiver Travis Rudolph and Bo Paske, a sixth-grade boy with autism.

At the start of the school year in 2016, Rudolph and several teammates visited Montford Middle School in Tallahassee, located near the FSU campus. When Travis spotted 11-year-old Bo sitting alone in the cafeteria, he walked over with his slice of pizza, joined him, and struck up a conversation.

Travis’ simple act of kindness drew national attention when a photo of the two sitting across from one another went viral. Bo described the lunch as “kind of like me sitting on a rainbow.” Travis remarked: “A lot of people give me credit for doing what I did, even though I just see it as that is me.”

Bo told Travis that he was a big FSU fan. The two of them stayed in touch after their first encounter.

Leah Paske, Bo’s mom, wrote about it on Facebook: “Several times lately I have tried to remember my time in middle school. Did I have many friends? Did I sit with anyone at lunch? Just how mean were kids really? Now that I have a child starting middle school, I have feelings of anxiety for him, and they can be overwhelming. Sometimes I’m grateful for his autism. That may sound like a terrible thing to say, but in some ways I think, I hope, it shields him. He doesn’t seem to notice when people stare at him when he flaps his hands. He doesn’t seem to notice that he doesn’t get invited to birthday parties anymore. And he doesn’t seem to mind if he eats lunch alone.”

She went on to say, “A friend of mine sent this beautiful picture to me today and when I saw it with the caption ‘Travis Rudolph is eating lunch with your son’ I replied ‘Who is that?’ He said ‘FSU football player,’ then I had tears streaming down my face. I’m not sure what exactly made this incredibly kind man share a lunch table with my son, but I’m happy to say that it will not soon be forgotten. This is one day I didn’t have to worry if my sweet boy ate lunch alone, because he sat across from someone who is a hero in many eyes.”

Difference and inclusion are terms that are increasingly in vogue in today’s public schools. Growing numbers of children who were previously separated in special education classes and schools are being integrated into the “mainstream” in order to reduce costs and provide less restrictive environments for learning and social-emotional development.

Labeled children, particularly as they approach adolescence, are often objectified, devalued, isolated and ridiculed by their peers. Objectification robs individuals of their humanity. In such relationships the different child simply becomes “the other,” the one too often left out in the cold.

In an era when there seems to be no shortage of awful stories generating from college campuses, the story and photo of Travis and Bo is a breath of fresh air. Henry James said that “a good story is both a picture and idea, and that the picture and the idea should try to be interfused.”

The picture of Travis joining Bo at the lunch table tells us that a simple act of kindness can go a long way to making a difference in someone’s life. We learned from Travis that what it takes is just a little effort—and an abundance of heart.