For Jeremy Sisto, acting just always seemed to be the right path to take in life. After his parents divorced when he was young, Sisto’s mother decided to pursue her dream of becoming an actress and headed to the Windy City taking Sisto along for the ride.

“My mom was a single mother and she was a commercial actress, so she would drive around from agent to agent and would bring them cookies,” Sisto recalled. “We would always be with her and they were like, ‘Hey. Your kids want to audition?” and we did. Pretty quickly I got a play at Goodman Theatre at Tennessee William’s last play where I had a couple of lines. I really had a fun experience with that. I went to a rough school at that time and I just continued doing plays and commercials. As a kid, it was just a fun experience and there was all this creativity. I got a movie when I was 16. It was always this far-fetched dream in our lives, so it was this big dream come true. It wasn’t like I was on the road to become a doctor and veered to the right. It just naturally happened in my life. This path was kind of there and I was fortunate enough to get some early and lucky success. I’ve gone in and out of wanting to be an actor throughout my life. It’s a weird profession.”

“Anthony [Anderson] was really fun to be with and so was Jesse [L. Martin],” Sisto said about his fondest memories working on the show. “With Jesse it was the end of a nine-year run and I think he was ready to go. Anthony just came in with some fresh and fun energy. You definitely have to match his energy, which is hard to be around if you want to be shy. He’s really good bringing people out of their shell. He’s really lovable and also had a really positive outlook on work. He was always staying positive and had fun with it. Every now and then you’d come into some actors who complain a little bit about stuff and that kind of vibe can be contagious—that doesn’t even cross Anthony’s mind. You know who else is like that? Alana [de la Garza]. She’s now on our show, which is great. It’s great energy to have around. She doesn’t take it too seriously. Linus [Roache] was also great. He’s such a good guy. I did a show with him called Kidnapped. That was fun. It’s always about the people you hang out with.”

Now, Sisto is teaming up with Wolf once again in Wolf’s newest crime drama FBI playing FBI assistant special agent-in-charge Jubal Valentine. The fast-paced drama tells the story about the inner workings of the New York office of the Federal Bureau of Investigation. The show has already produced a spin-off titled FBI: Most Wanted.

“I was on Law & Order when they closed out the 20-year run of the original show,” Sisto said about how he became involved with the show. “Dick called me and had me come by to have me meet him and Craig [Turk], who is the other creator of the show, along with a couple of other producers that I’ve known. We just talked about [FBI] and it was towards the end of pilot season and it seemed cool. Dick is a good person to be in business with and it’s always a nice feeling when someone you’ve worked with calls you back because that means they liked working with you. I liked the idea of the role. It wasn’t the usual thing on these shows. It was the one thing that was a little different. They don’t have a guy like this on the cop shows where you’re the head of this big room trying to sort people and organize information. It seemed like a challenge and a fun role to play. It had a lot of possibility for success.”

Valentine is the nerve center of the FBI’s Joint Operations Command (JOC) room, whose ability to easily relate and engage with superiors and subordinates makes him a master motivator. 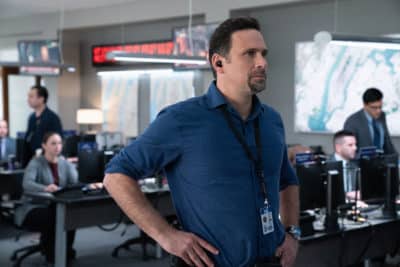 “He’s a good guy,” Sisto said about his character. “He’s definitely obsessed with his job, but he’s also obsessed with his kids. His marriage did not work out probably because of the difficulties of the job. Not only is it a difficult job for the people who do it, but also it takes a toll on the family. He’s still devoted to his family, which tells a lot about him. He’s also usually good at dispelling conflict and intense adversity. If he’s in the room with somebody who’s kind of a jerk having some heated thing, he’s pretty good at deflating that. He’s self-deprecating at times, but he also likes to hear himself talk and he’s definitely not shy about being the center of attention and being the guy that people come to.

He reminds me of a really good first AD on a film set. The first AD is like the one who runs the whole thing and keeps it moving. He’s always shouting because there are a lot of people in the room who have a lot of jobs. It’s a little bit of a thankless job, but that is what’s cool about it. I think Jubal likes to step away when the arrests are being made and people are giving speeches at the podium. That’s not really what he’s about. He likes how difficult it is to make this mechanism of the FBI work. He likes to be in that world.”

To prepare for the role, Sisto and the cast trained with real FBI agents who are out in the field.

“Dick and Craig had worked pretty closely with the New York office with a handful of agents there,” Sisto said. “I think Dick had actually produced a documentary about the FBI there, which a lot of the show was inspired by that. I became friendly with some of the agents and the guy who my role was kind of based on. It was really cool and it was with great people. We got to tour the office and go to the bar where they all drink and just hang out with them. We had great conversations about how it all works. It’s a really cool job and the people who are drawn towards it have a real capacity to handle some high intensity crap.”

So what is it about the show that attracts viewers to tune into FBI every week? Sisto believes that it’s the realism that the show offers its audience.

“As a viewer, I’m not a procedural guy just because my brain doesn’t really work like that,” Sisto explained. “I kind of have trouble remembering names and stuff, so sometimes I have trouble following the plot for procedural stuff honestly. I prefer watching a character just alone in his room thinking for an hour than following a bunch of plots. That’s just how my brain works as a viewer. I really try and listen to the fans and read the comments online. I talk to people who do watch this genre and I try to get an idea of what it is that they think. I think people are fans of the show because it’s interesting to fantasize and see what it’s really like. I think there’s a lot of people out there who are like, ‘It would be cool to be a FBI agent.’ Bad things happen all the time and they’re really crazy. It would be a really interesting job to be a person who follows those clues and try to figure out how to prevent bad things from happening. I think realism is an important aspect. I think people are watching for that. I think we’ve gotten better and better trying to tell the story on how these guys work. It’s the most complexed crime fighting organization just in the logistics of how they find their criminals. I think what people respond to is that we’re trying to tell that story and people are interested in how all of that works. I think there’s a whole load of fans who just love mysteries and solving them with all the twists. We’ve got writers who are the masters at that. Those twists have to be surprising, but also not totally be out of left field and justified.”

Although the show’s sophomore season recently had its season finale, Sisto talked about some memorable moments from the season.

“There was some stuff that was really interesting,” Sisto said. “We had a crossover with FBI: Most Wanted. That [was] a pretty intense two-hour experience. You’re going to see that Jubal has a real history with Jess from FBI: Most Wanted and that they have a pretty entertaining working relationship. They work very differently, but they respect each other a lot. That’s going to be a really fun thing for the audience to see when the two worlds converge.”

Catch FBI on Tuesdays at 9 p.m. ET on CBS. You can also rewatch the season on CBS All Access.