Trigiani’s upcoming Nassau County appearance is being arranged by The Friends of the Manhasset Public Library and seating for the author’s 7:30 p.m. presentation is limited. Tickets can be purchased in advance for $25 per person, and the fee includes a copy of Kiss Carlo.

Having grown up in Big Stone Gap, Virginia, Trigiani and her family now reside in Manhattan’s Greenwich Village and most of her previous 16 books have been New York Times bestsellers, starting with her debut novel, 2000’s Big Stone Gap. Trigiani directed and wrote the film adaption of Big Stone Gap, which was initially released in 2014 and starred Ashley Judd, Patrick Wilson and Jane Krakowski, among others.

Big Stone Gap is available at Netflix and billed as the tale of a pharmacist, Ave Maria Mulligan (Judd), who comes upon information that eventually transforms not only her life but the life of the Virginia town after which the motion picture is named. Indeed, a photo of Judd and Wilson from that film shoot is prominently displayed on the home page of the author’s website. 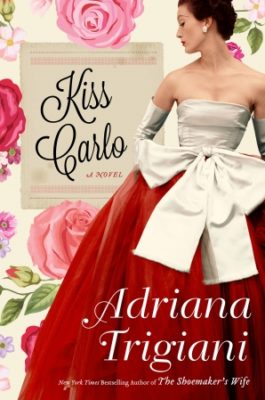 Harper Books reports that Kiss Carlo, while a work of fiction, was inspired by Trigiani’s grandmother’s scrapbook. Its storyline focuses on the twists and turns of multiple families living in South Philadelphia, a few years after the end of the Second World War. Trigiani’s father grew up in Roseto, Pennsylvania, so the author has insights into that state, too, having also made an award-winning documentary about that community and its history (Queens of The Big Time).

“Television has made its debut and manufacturing thrives as clothing factories spring up like weeds in the Northeast,” a Harper Books news release on Kiss Carlo states. “There are societal changes, too: women who worked during the war were now politely expected to go back into the kitchen, have the babies and become homemakers once more.”

This is the backdrop against which readers meet the Palazzini family. Their Palazzini Cab Company & Western Union Telegraph Office is owned by Dominic Palazzini and his three sons and, while business is good, family discord is percolating below the surface. Things get more complicated when a telegram arrives from Italy.

Kiss Carlo “is a novel about the power of family secrets, the triumph of true love over grief, and the guts it takes to leave one life and take a risk to start over again for a piece of the American dream,” Harper Books reports.

For further information and to obtain a reservation form for the June 20 event, contact friendsofmanhassetlibrary@gmail.com.