Think about the typical Thanksgiving day for a moment. For most of us, it’s the day when family members gather in the kitchen to prepare an obscenely large feast while playfully harassing one another and bickering over long-buried family drama. The ordeal culminates with the entire extended clan sitting down for an eating marathon around a long dining room table—or a collection of smaller tables arranged in a long row and covered in mismatched tablecloths.

A special day for some, it sounds like an ordinary Sunday for most Italian-Americans.
An Italian-American Thanksgiving meal mimics the typical turkey day in many ways. There’s the giant bird that weighs in at no less than 20 pounds, of course. Surfacing from a wet or dry brine, the turkey is dressed with an utterly insane amount of butter, along with roughly chopped aromatics like onions, garlic, thyme, rosemary and sage.

The bird roasts for at least four hours, filling the loud and at times awkward house with familiarly comforting aromas, before it emerges like a shiny, golden-brown beacon of fat-rendered lusciousness. In an effort to stave off any unfortunate dryness, the turkey is always accompanied by expertly refined, flavorful gravy made from the turkey’s precious drippings and valuable giblets. 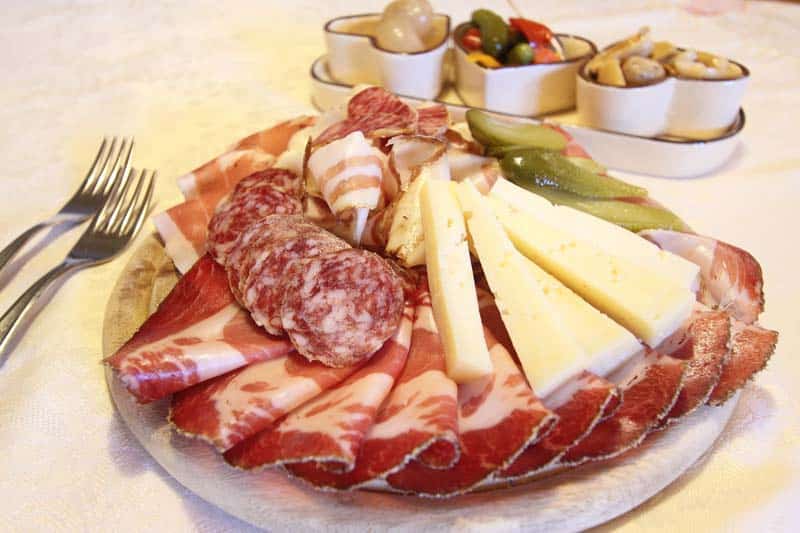 Besides turkey, an Italian-American Thanksgiving also features all the trimmings one might expect, like stuffing, mashed potatoes, green bean casserole, a marshmallow-topped sweet potato concoction, candied yams, cranberry sauce and probably much, much more.

When Things Get Italian

“Moderation” is definitely not a theme of the Italian-American Thanksgiving. Before the fat-bottomed bird and side dishes make an appearance, an entire Italian feast is served—this sends all guests into their first blackout of the day.

It all begins with antipasti dishes. There’s the cured meat category, with prosciutto, capocollo, mortadella, soppressata and other forms of dried Italian sausage all dotted with gorgeous flecks of flavorful fat. This is usually paired with plenty of cheese, like Parmigiano-Reggiano, pecorino, Gorgonzola, fresh mozzarella, along with many other cheesy possibilities. 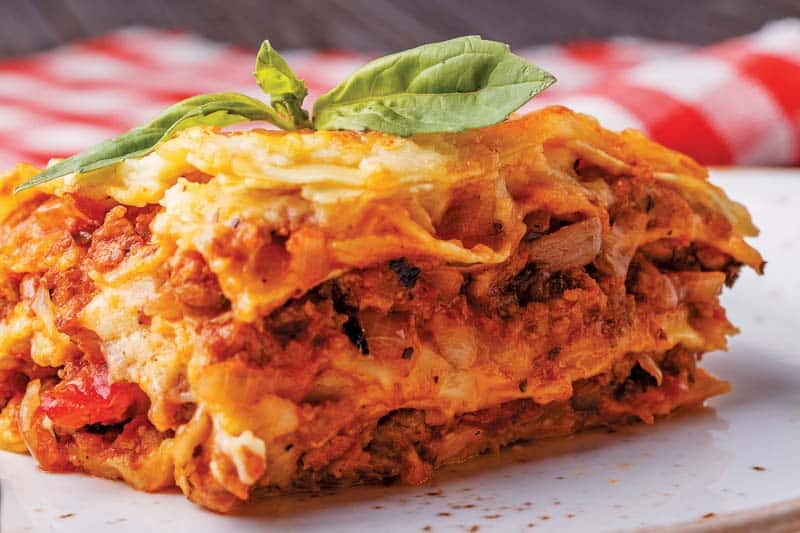 This meat and cheese collection boasts its own array of ancillary food items. These include multiple styles of olives; a selection of preserved vegetables like roasted bell peppers, artichokes, and mushrooms; cold seafood salad; anchovies in olive oil; and more crusty Italian bread than you’d think would be safe to have on hand at one time. Oh, and don’t forget about Italian wedding soup or tortellini en brodo.

As for the main course, one of the most common Italian preparations to make its way into Thanksgiving is lasagna. There’s just something about this legendary Italian staple that makes it fit perfectly into the Thanksgiving game plan—perhaps it’s the way the broad, al dente pasta sheets cling to sauce and cheese, while bite-sized pearls of sausage are dotted throughout a baked block of perfection that’s soft in the middle and downright crunchy in the corners.

Other baked Italian favorites that are often enjoyed on Thanksgiving are the tubular and cheese-packed baked ziti, along with ricotta-heavy stuffed shells and manicotti. These baked dishes mark the ideal precursor to the turkey’s grand entrance—but again, please consider taking a nap before cutting into the bird and pouring gravy onto the entire affair.

With Italians in the kitchen, chances are you’re not going to see the standard turkey day fare. Instead, Italian-American cooks will put their own traditional spin on the foods we normally enjoy on Thanksgiving. Most prominently is the Italian take on stuffing—which, by the way, is better when prepared in a separate pan rather than stuffed inside of the bird.
Italian stuffing is more rustic, rich and intense than a typical Italian stuffing—especially compared to that “stuff” in the red box. It’s made with a round Italian loaf, cut into rough-hewn cubes that are much bigger than other stuffing variations. It also includes sweet Italian sausage crumbles, which deliver an aromatic kick of fennel and other spices to an already fragrant mix of herbs. 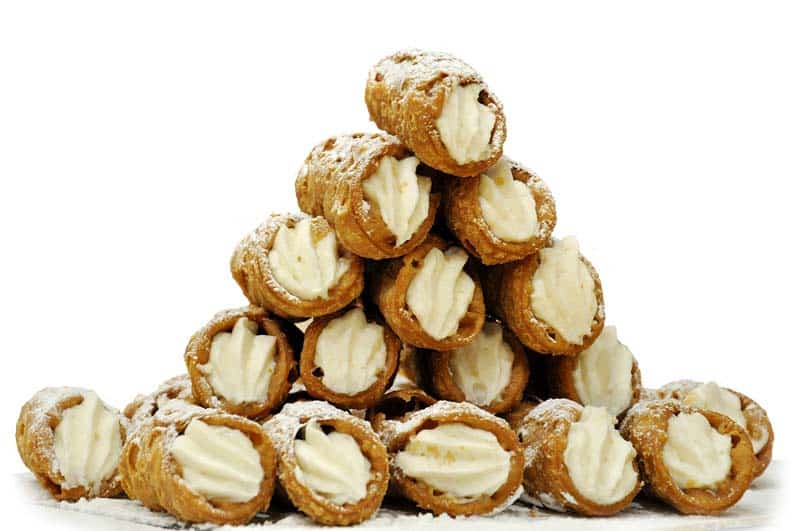 Another side dish that you’re likely to find in an Italian-American home on Thanksgiving is stuffed artichokes. A traditional Italian comfort dish, stuffed artichokes are a staple around the holidays in most Italian homes—and it really doesn’t get more comforting than artichokes stuffed with bread crumbs, garlic, olive oil and cheese for a resulting dish that is cheesy, garlicky and full of flavor.

Though it might seem impossible that anyone is still hungry after all that, dessert is just as important as the meal itself. And while Italian-Americans bring plenty of pies to the Thanksgiving affair—whether that’s apple, blueberry, chocolate cream or lemon meringue—traditional Italian desserts also make themselves known. Piles of cannolis give way to piles of pignoli and rainbow cookies, while flaky sfogliatelle provide a sweet end to the eating festivities.

Of course, it wouldn’t be an eating event without some strong espresso amped up with sambuca. And when you’re finally ready to call it a night, finish off with a touch of Frangelico or a nice vin santo—after all, a touch of booze is perfect for taking the edge off.

Thanksgiving is the day we’re all given a free pass to overeat until we literally cannot bear to hold ourselves upright and cannot manage to keep our eyes open. Like I said earlier, just like a typical Sunday in an Italian-American home.