A Spoonful Of Cereal

The curious confectionery spot blends vanilla ice cream with various “swirl-ins,” including an array of childhood favorite cereals alongside sweets like candy bars, cookies and cones. With 18 cereals and 20 other sweets to choose from, it would take a math whiz to figure out the exact number of concoctions that one could create. Since math is fun for precisely no one, here are five of the craziest concoctions you can make yourself at Spoons.

*Note: both ice cream and milkshake swirls come with two swirl-ins, with each additional swirl-in costing 75 cents each. Also, the below mixes are not menu items, but inventions of the writer.

PB & C To The Nth Degree 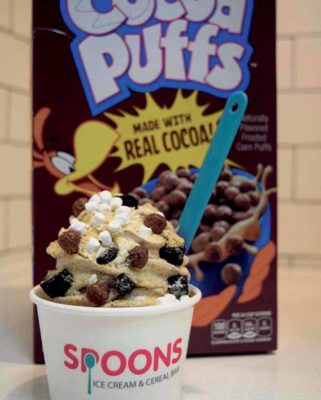 This might seem obvious, but it is worth mentioning. Swirl cereals Reese’s Puffs and Cocoa Puffs with Reese’s Peanut Butter Cups for an pleasing overload of the enticing sweet and salty classic combination. Cereal puffs Cocoa and Reese’s—which were somehow discontinued for a time—come together for a smooth ice cream version of the classic PB and chocolate bite. Adding Reese’s Peanut Butter Cups to the mix might seem like overkill to some—but in the land of cereal ice cream, there is no such thing as “over doing it.” 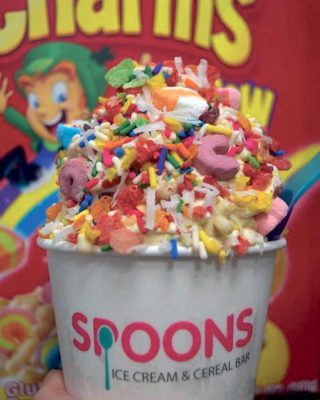 The most alluring aspect of Spoons is that the strange cereals brews you dreamed up as a kid become a reality. Nowhere is this more true than when blending Fruity Pebbles with Lucky Charms. The Flintstones’ hocked cereal with its dizzying array of colors and “fruit” flavors is the perfect combo with that leprechaun’s multi-colored marshmallows and oat-y thingies. Tossing in standard mini marshmallows adds the extra “goo” element to bring it all together. A touch of graham cracker could also take this to another level. 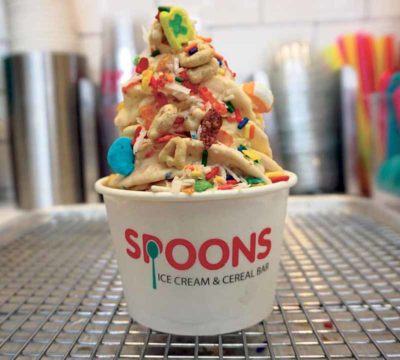 When Cap’n Crunch introduced his Crunch Berries, it was more than just a clever way to fight scurvy. Those colorful balls added bright-berry flavor to the Cap’n’s corn and oat puffs of…are they life preservers or perhaps swimmies? Regardless, blended with the criminally discontinued Rice Krispies Treat cereal is a combination you didn’t know you needed. The addition of graham cracker breaks up the onslaught of sweetness with some texture, while the marshmallow inherent in the Treats holds everything together.

Tony’s Toast In The Shell 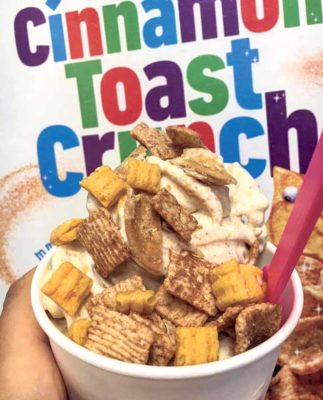 Frosted Flakes is the culmination of the genius idea to take a bad cereal (Corn Flakes) and make it good with “frost” (sugar). Taking the frosted feature and applying it to the cinnamon toast experience of Cinnamon Toast Crunch is the driving force behind this mixture. The cinnamon-sugar dusting on Toast combines with the frost of Flakes for a flavor that really should be found in the cereal aisle. Since it is not, make it yourself at Spoons. Cannoli shells and chocolate cake crunchies give the impression that you are eating a cannoli filled with cinnamon-sugar cream. 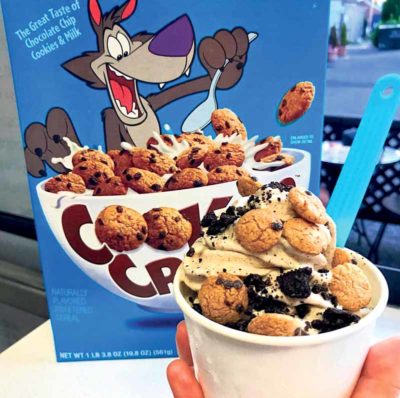 The once-discontinued Oreo O’s cereal is back on the supermarket self, and Spoons is beginning to add it to its selection of cereals ready for a swirl into ice cream or a shake. Be bold—and slightly cookie-obsessed—by blending it with Cookie Crisp, cookie dough and crushed Oreo’s for a cookie-inception with vanilla ice cream acting as the milk for a treat that would make Cookie Monster blush. And a side note, shout out to whoever invented Cookie Crisp—which is essentially a bowl of chocolate chip cookies for breakfast.