A Deeper Shade Of Latin Soul 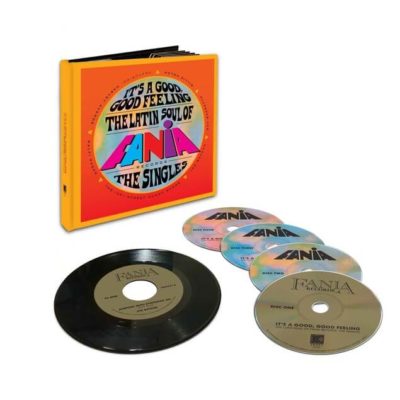 What Motown and Stax/Volt were to rhythm and blues, Fania Records occupied the same place in the world of Spanish-language music that evolved from boogaloo into salsa by the early to mid-’70s. Founded in 1964 by Dominican-born composer/bandleader Johnny Pacheco and Brooklyn-born, Italian-American ex-New York City police officer/lawyer Jerry Masucci in 1964, Fania’s demographic was a younger generation of predominantly second-generation Latin-Americans. Many of them were Puerto Rican, Cuban and Dominican and were equally enthralled by the aforementioned R&B getting pumped out from Detroit and Memphis.
Boogaloo represented a hybridization of R&B and Latin music styles like mambo and cha cha that yielded a handful of hits including Pete Rodríguez’s “I Like It Like That” and Joe Cuba’s “Bang Bang.” It was a trend that led Fania to make a foray down that path in quest for crossover success from 1965 to 1975. It’s this chapter of the label’s history that’s thoroughly covered in It’s A Good, Good Feeling: The Latin Soul of Fania Records (The Singles), a four-CD/7-inch box set featuring single versions of 89 tracks from artists ranging from label stalwarts Larry Harlow and Ray Barretto to lesser-known names like Ralfi Pagan and Ralph Robles. Compiled and co-produced by DJ Dean Rutland (who also penned the fascinating and rigorously informative liner notes), Good, Good Feeling is a musical time capsule whose contents were curated with the institutional knowledge Rutland gleaned as head of A&R for the label from 2006 to 2009.

“I find it a very odd thing that I ended up with this knowledge of Fania,” the Brit admitted during a recent Zoom call. “As soon as I started working on it, I found the cultural aspect so overwhelming, it almost felt inappropriate as an outsider. But, at the same time, I found the people who had dealt with the music previously, had never really dealt with it in a historical manner that was respectful in the same way that you would treat a label like Motown.”

Enlisted by storied label executive Joe McEwen, Rutland leaned heavy on his first go-round with Fania to build the framework for this anthology overflowing with rich imagery and ephemera running the gamut from promotional shots and singles sleeves to promotional fliers and album covers. In addition, he reached out for help from original label art and design director Izzy Sanabria, currently enjoying retirement down in Florida. A bulk of the artwork used can be traced back to Rutland’s first tour of duty. That was when a mysterious invoice unearthed by the accounting department yielded a deep cache of archival material stashed away in a warehouse in Upstate New York, hundreds of miles away from the label’s Miami headquarters. During that time, Rutland also compiled lists of discographies that didn’t exist, which helped immensely when it came time to doing the detective work of tracking singles down for this anthology, a task Rutland treated very seriously.

“With this project, I felt it was strictly a cultural way that this music seemed more relevant on a day-to-day basis within the Puerto Rican/Dominican cultures than mainstream music’s history did,” he said. “Therefore, the most important songs from Fania were as important to people of all generations at that point. It was an interesting perspective. At first, when I worked on this music in the mid-2000s, there were people saying if you treat music this way, it will be ignored. We should just be chucking it out as CDs for $10 or whatever it was. It was an interesting experience and there were a lot of things that needed to be picked up from the Jerry Masucci and post-Jerry Masucci era, which basically ignored the artists. It was fun to do that.”

Fania’s Latin soul history was a big enough tent to include a number of non-Latin performers that included Jewish musicians Harlow and Harvey Averne and Joe Bataan, a former gang banger-turned-vocalist of Filipino-African-American descent. While Harlow wasn’t as interested in going down Fania’s Latin soul path, Arverne and Bataan embraced it, with the latter most represented on Good Good Feeling via 23 cuts.
The push and pull of being caught between two sounds—the American mainstream and traditional Latin music—is sprinkled throughout this set. This melting pot vibe manifests itself in Orchestra Harlow putting a bilingual spin on the Hugh Masekela hit, recasting it as “Grazin’ In the Grass (Una Miradita de Amor)” and Bataan scoring a hit with a 1967 cover of The Impressions’ “Gypsy Woman.” Elsewhere, Barretto’s 1968 classic “A Deeper Shade of Soul,” a gem infused with Afro-Cuban rhythms, had enough lasting power to eventually get dusted off and become a Top 25 hit for Dutch band Urban Dance Squad in 1991.

For Rutland, this era of Fania’s music was a mirror for what was going on during this highly volatile time.
“This is a story that tells you something fundamental about where a segment of society was and trying to reach at a certain period,” he explained. “The late ‘60s was a period of change where people were trying to find where they could make that breakthrough and this is an expression of that attempt to break through. In fact, in some ways it’s an expression of how that breakthrough didn’t happen for most people at that point. And in reality, things changed, but not as much as everyone had hoped for.”

Amid all myriad storylines that make up this part of the Fania story, none is more intriguing and tragic as that of Ralfi Pagan, a Puerto Rican/Cuban crooner whose knack for balladry scored him a number of Spanish and English R&B hits including covers of Bread’s “Make It With You,” the Drifters’ “Up on the Roof” and Carole King’s “Too Late.” Three years after leaving Fania in 1975, Pagan took over a touring slot in Columbia Bataan couldn’t make. It was during this jaunt that Pagan was murdered with his body found on a local beach amid rumors of a promoter arranging for his murder to avoid paying him. It’s an anecdote Rutland is still incredulous over decades later.
“It’s one of those weird stories,” he said. “No one is ever going to really find out what really happened particularly when it involves concert promoters and drug dealers in Columbia in the ‘70s. If there’s anyone left to talk, I’m guessing they can’t remember or don’t mean to. It’s not like there’s going to be a bit of an investigation that’s going to turn up a smoking gun. If it was an accident or it was murder, it’s tragic either way.”

The Latin soul experiment eventually failed as boogaloo was looked at as a fad whose time had come and gone. Masucci did what he could. He hired the best arrangers, held a 1973 concert at Yankee Stadium headlined by the Fania All-Stars attended by 45,000 people (that was released as an album two years later) and sold millions of records in New York, the Dominican Republic, Puerto Rico and Venezuela. Despite all his efforts, a Stateside crossover hit proved to be elusive.

And while the label eventually ended up in probate court for years following Masucci’s death in 1997, Rutland feels it was crucial to have pulled together this overview of Latin soul music that defines It’s a Good Good Feeling.
“Fundamentally, this is great music, which is very important,” he said. “It’s an expression of the culture trying to make a change or trying to find its place within the changes that were going on. The end of the story is somehow a step back inside perhaps to the comfort of what was known. It was like trying a different way, regrouping and continuing to make good music, but it won’t be the same. In some ways, you can say that’s kind of sad. But at the same time, the idea of these artists not needing to compromise their culture was the next stage. They reexamined what made their music fundamentally theirs and saw how it fit in with modern New York. It’s kind of an interesting thing.”