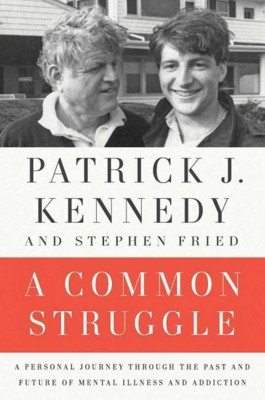 Patrick J. Kennedy is a former member of the U.S. House of Representatives who has struggled with mental illness and addiction for most of his life. He has become a leading force in the passage of the Mental Health Parity and Addiction Equity Act of 2008, a U.S. law that states that it is illegal to treat diseases of the brain differently than those of any other part of the body. The battle ahead is for the law to be enforced in the face of health insurers who stand to profit by denying the full range of coverage for people suffering with mental illness and addictions.

In his 2015 book, A Common Struggle: A Personal Journey Through the Past and Future of Mental Illness and Addiction, Kennedy offers personal reflections on the impact of trauma, addiction and mental illness on the extended Kennedy clan. He talks about the rocky relationship he had with his dad, the late U.S. Senator Edward “Ted” Kennedy and about his mom Joan’s battle with alcoholism.

At the heart of the memoir are Kennedy’s own revelations about his co-occurring mental illness and prescription drug and alcohol addiction, his path to recovery, and his ascendence to becoming, arguably, the nation’s leading advocate for parity and equity in mental health and addiction care. Kennedy has fought hard to lift the veil of ignorance about mental illness and addiction and to expose the health insurance industry’s tradition of denying and restricting access to care for individuals with brain illness.

Kennedy radiates a fire for eradicating stigma and ending discrimination against people with brain illness. According to One Mind, a nonprofit organization he cofounded that is dedicated to benefiting all affected by brain illness and injury, “One of the harmful effects of stigma is that it can lead to discrimination. It could be as obvious as someone making a negative remark about your mental illness or as subtle as someone avoiding you because they think you could be unstable, violent or dangerous.”

On their website, One Mind lists some of the ways that these attitudes can be damaging and even dangerous. For example:

• Reluctance to seek help or treatment due to the labeling
• Lack of understanding by family, friends, coworkers or others you know
• Fewer opportunities for work, school or social activities or trouble finding housing
• Bullying, physical violence or harassment
• Health insurance that doesn’t adequately cover your mental illness treatment
• The belief that you’ll never be able to succeed at certain challenges or that you can’t improve your situation

Kennedy rightly frames the inequities that people with mental illness and addictions face as a matter of civil rights.

What he has accomplished, which he freely acknowledges is the result of a collective effort, has already gone a long way to wiping out stigma and increasing people’s access to mental health and addictions care. His goal, he states, is to launch “a new civil rights movement, to finally force medical equality for diseases of the brain.”

Tens of millions of Americans owe Patrick Kennedy a debt of gratitude for leading the way. Now all of us must carry the ball forward by treating children and adults with brain illnesses with dignity; and demanding that government enforce parity and equity for all and put an end to discrimination.