Angela Anton - From The PublisherNewsNassau News

A Commitment To Exploration: The Sebastian Elcano Prepares To Set Sail

The joint ceremony and meeting held in Boston on Spain’s Training Ship, The Sebastian Elcano, on the weekend of April 26 was an overwhelming success with both “partners” agreeing on future plans to work and help spread exploration worldwide beyond 2019.

The president of the EC spoke of the club’s honor to join and support Spain’s celebration of 500 Years of Exploration 1519-2019, by the Elcano, one of the largest sailing ships in the world, repeating the voyage of Magellan/Elcano’s first navigation of the world in 1519.

Following explorer Richard Wiese’s speech, Commander of the Elcano Ignacio Paz Garcia, spoke of Spain’s commitment to exploration by the Crown of Spain along with mutual cooperation. He was followed by addresses from Admiral Ignacio Paz Garcia and then the Ambassador from Spain, Santiago Cabanas. 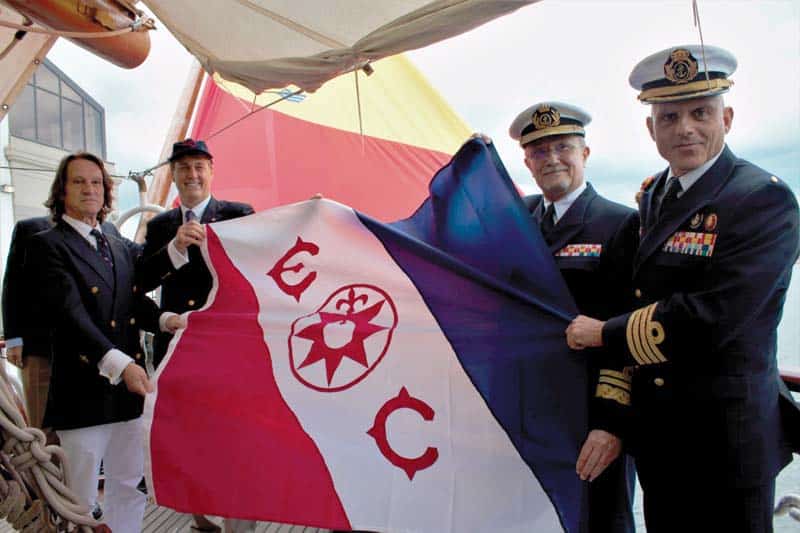 Moving on to the raising of the flags ceremony, the Explorers Club was raised first followed by the Flag of Spain. The Spanish Navy’s anthem followed played by the ship’s band.

Before holding a full tour of the ship, Spain introduced the Explorers Club permanent committee formed to work with Spain to celebrate Spain’s 500 Years of Exploration 1519-2019, headed by EC Chair, Robert Hemm, along with Marcelo Mendez, and Kitin Munoz, the UNESCO ambassador, plus added EC Members, Richard Wiese, president of the EC; Will Roseman, Executive Director; Robert Atwater; Chair of the Flag Committee, and Angela Anton, EC Member, U.S. Press. The joint meetings with Spain could not have been more enjoyable and productive.

On the tour, all members including those from the new England Chapter and elsewhere, spent the balance of the afternoon on the ship meeting officers and a crew of cadets. More than 100 people were in conversation about the education of their ship and training.

On Saturday evening, a black tie event included more than 200 dignitaries and guests from Boston, who enjoyed wine, food and music. 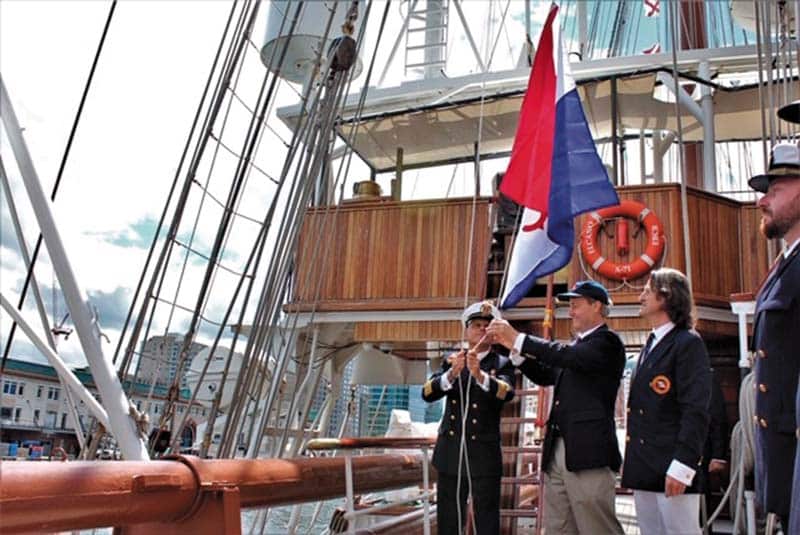 As The Sebastian Elcano leaves Boston to sail back to Cadize, it will prepare to begin its journey to circumnavigate the world, following the route of the famous Magellan-Elcano expedition in 1519, which began with five ships and a crew of 298. It landed back in Seville, Spain in 1522 with just one ship, The Victoria, and a crew of only 18.

With Spain’s commitment, the Explorers Club recognizes and fully supports the contribution and Spain’s inclusion of other nations joining the Crown in celebrating the history of Exploration.

Spain’s Celebration will be joined by other nations on a growing basis in July. Follow the Elcano’s historic voyage in the pages of Long Island’s Anton Media Group, and other New York newspapers throughout their voyage.

To learn more about the Elcano, see 500 Years Of Exploration.

Robert Hemm
Robert Hemm is a fellow of The Explorers Club and has conducted expeditions around the world.