Ah, Hot Wheels. Miniature models of actual cars in a scaled down version of the real deal. My own Hot Wheels moment was on my 16th birthday. I remember being called down before dinner to “look at something in the driveway.” To a newly licensed 16-year-old, there aren’t many indications as to what such a surprise could be. Think again. I went outside to find a miniature car in the driveway, complete with a small bow. While I did get a car eight months later, my parents found great comic relief in Hot Wheels, much to my dismay.

Although Hot Wheels were originally intended for children and teens, they have become popular collectors items among adults.

The tiny cars were designed by a series of automotive industry leaders as well, with the original set made by Elliot Handler. In May of 1968, Harry Bentley Bradley contributed his designs for 11 of the cars. The 1970s introduced the Snake and the Mongoose—notably drag racing’s first major non-automotive corporate sponsor—as well as the first Silver Series, which included the Boss Hoss, the Heavy Chevy and the King ‘Kuda cars, all obtained through a mail-in offer that included a membership to the Hot Wheels Club.

The late 1970s to ’80s brought about two things: color and controversy. In 1981, Hot Ones wheels were introduced with gold-painted hubs, thinner axles for speed, and additional suspension than other Hot Wheels cars. Then came Ultra Hot Wheels, with even more speed improvements, followed by Thermal Color Change paint, allowing the cars to change color on exposure to hot or cold water.

In 1982, Hot Wheels had gotten into a spat with General Motors’ Chevrolet Motors Division, when the latter’s Chevrolet Corvette ended the curvaceous Mako Shark body-shape design, stating a new redesign was in the works, but production was pushed back due to assembly line issues. However, Hot Wheels saw what the new model of Corvette was going to look like before GM’s official unveiling, leading the brand to design a die cast version of the 1984 Corvette. The error in judgment angered GM (they almost pulled their licensing with Mattel), but actually allowed avid Corvette fans to see what the new Corvette was going to look like. 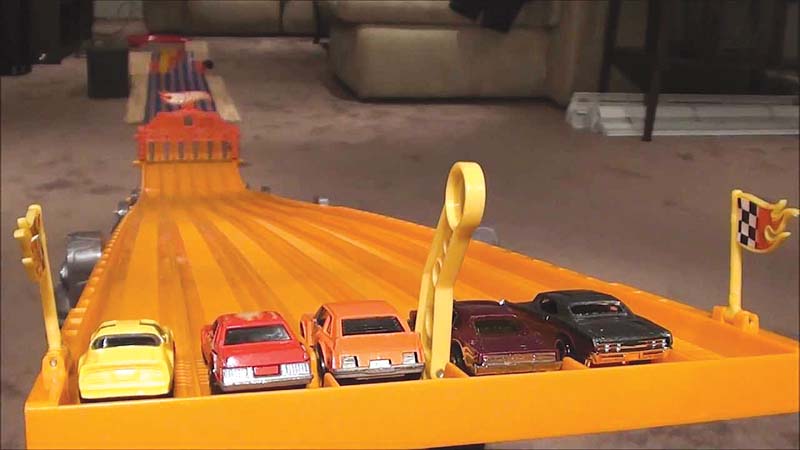 The late ’80s to ’90s saw numbers on the side of the cars while the early 2000-era featured real rubber tires and multiple colors of each vehicle.

In 2018, Hot Wheels celebrated the making of its four billionth car (yes, you read that right) with the most blinged-out model ever. The production of a diamond-studded model worth $140,000 featured 2,700 diamond chips, a total of almost 23 karats, and was cast in white gold, with rubies serving as taillights.

The Hot Wheels brand is a car culture that still remains popular today. If you can’t collect the real deal, consider a scaled down version instead. A classic is a classic.