When one thinks of the cello, images of tuxedoed musicians waiting at attention in the orchestra pit of a philharmonic is what generally comes to mind. So it’s easy to see why the site of a young black girl playing the same instrument while busking in the heart of New Orleans might come off as a bit odd. But if you knew anything about Leyla McCalla and the musical journey she’s taken, you wouldn’t be shocked at all. After all, this is the same person who has recorded and toured with the Carolina Chocolate Drops, one of the black groups that play bluegrass and old time mountain music. And the New Jersey native is also the same person whose first album, Vari-Colored Songs: A Tribute to Langston Hughes, is a musical mash note to not only the late Harlem Renaissance great, but the Haitian folk songs of her youth. It all came to fruition after McCalla made the decision to uproot from New York City and relocated down south to New Orleans back in 2010. 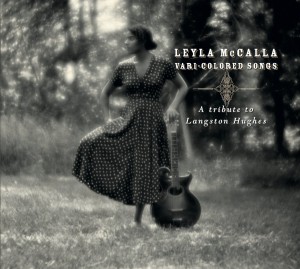 “I started to write music to Langston Hughes’ poetry I would say in 2008. At first I didn’t know what I wanted this to be so I started something called the Langston Hughes Project as a collection of musicians and friends making these compositions that I had come to life. I’d always thought this would be a really cool album but at that point, I didn’t really know what the album would be,” she explained on the phone from her Louisiana home. “I moved to New Orleans in 2010 but before I left New York, I had a friend who heard them, liked them and said I should really record these songs before I left New York so that I had something, [with the idea being] that when I got to New Orleans, I’d have a little demo for whatever I wanted to use it for. So I got my little collective together and came to New Orleans with four songs recorded and at that point, wanted to pursue making an album. It was also around that time that I started learning about the history of New Orleans and Haiti and kind of digging deeper into my roots. It felt very natural to pair that experience with some of the compositions of Langston Hughes.”

Having learned of Hughes when she was 12, the aspiring musician drew from The Selected Poems of Langston Hughes and a Hughes anthology to come up with material for Vari-Colored Songs. The resulting songs like “Too Blue” and “Changing Tide” sound like something you’d hear at a Boardwalk Empire-era speakeasy thanks to McCall’s prowess on the tenor banjo. Having started out playing piano when she was six, the banjo was yet another tool she added to her musical toolbox upon moving down to the Big Easy. It’s this kind of probing creative curiosity that drew McCalla away from the world of conservatory and classical music training she’d gotten from a Juilliard professor when she was a teenager. After her parents moved the family to Africa for two years and returned in time for the cellist’s senior year in high school, McCalla bounced around Smith College and NYU, honing her classical music chops before a chance encounter with fellow cellist Rufus Cappadocia became a pivotal moment.

“When I transferred to NYU, I really worked up my classical chops to audition. It was also around that time that I met the cellist Rufus Cappadocia, who is a mentor to me still and a good friend,” she recalled. “I saw him play at a party that my aunt invited me to with a Haitian verte band. And he was using all these techniques on a cello that I’d never really seen — slapping the strings with the bow and strumming it like a flamenco guitar and plucking it with this really rhythmically cool way. He just employed all these techniques that really made me want to be able to do that. After studying concertos, I thought that looked hard, fun and interesting.”

Outside of school, McCalla started studying and playing with Cappadocia. Before long, she started drifting away from the classical music world, playing in an Afrobeat band and making the decision to head south. Feeling as if she was being pulled in a lot of different directions in the Big Apple, McCalla found she was able to focus on playing cello, guitar and banjo while exploring the roots and connections between this culturally rich port city and her ancestral Haitian home. This sense of creative well-being helped sate a quest for meaning she’d been searching out and doesn’t take for granted.
“I want to be inspired but I’m really having trouble finding that in our pop culture. I don’t think Langston Hughes was really pop culture back in the day at all, but he existed,” she said. “And I know there are artists out there that exist, but they’re not as celebrated and I think it’s getting more and more challenging to make a living that way for a lot of people. And to me, understanding history and incorporating the stories into that have become really important to me because I feel like that’s missing a lot of the time.”